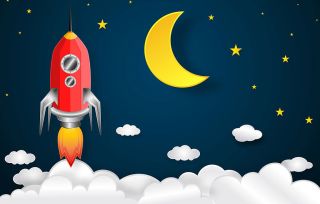 NASA’s Project Mercury launched the first Americans into space in the early 1960s and led to a remarkable series of space flight accomplishments that still inspire us today, including a successful moon landing.

Fast forward to today, and Kansas is embarking on its own Moonshot—an educational revolution inspired by NASA’s Project Mercury. The Kansas State Board of Education, with support from Randy Watson, the state’s commissioner of education, wants to take public education to a new level.

According to Commissioner Watson, the program’s goal is to empower educators to redesign and reorganize schools by providing students with:

■ More choice in their learning activities
■ Social and emotional learning supports
■ Technical and employability skills
■ Civic engagement opportunities
■ Meaningful curricula through project-based learning, and
■ An Individual Plan of Study (IPS) for every student.

As part of a new state accreditation model that focuses on meeting the needs of the whole child and not just on test scores, schools will redesign their learning environments by modeling their aspirations on the Mercury space program.

“The Mercury ReDesign of Schools is propelling Kansas schools forward by pushing the industrial revolution model of education to the side,” says Commissioner Watson. “We have likened this school redesign to when Kennedy issued a challenge to land a man on the moon. We have a 10-year journey ahead of us, and it’s a serious journey. We want to totally redesign K–12 education for all 286 school districts in Kansas by 2026.”

During the 2017–18 school year, seven Kansas Mercury school districts have:

■ Identified areas of concern to address in their schools
■ Created teacher research groups to find ways to test their solutions through action-research
■ Ramped up prekindergarten readiness by assessing each student prior to entering school
■ Followed students after they graduated from high school to determine if they are attending college, earning credentials, or entering the workforce, and
■ Scanned the job horizon for future graduates to determine the number of jobs that will require postsecondary education.

Kansas schools have opened the aperture on their educational lens. Social-emotional skills, character education, Individual Plans of Study tied to student interests, and an intense focus on relationships, relevance, rigor, and a responsive culture will now be prioritized in K–12 schools. Mercury Schools are listening to educators in the trenches before buying new textbooks or designing new curricula. The schools have found this approach—considering the views of teachers who work with students face to face every single day—to be highly effective.

One elementary school that was concerned with student tardiness now begins the day with a family breakfast that encourages students to arrive on time. It’s also a great way to create positive relationships among families. Some Mercury Schools, aware that students learn at different rates, have adopted programs to blend grade levels and focus on mastery learning instead of age-based learning. In order to engage students in meaningful learning, many of the schools are implementing project-based learning.

STEM, STEAM, coding, and culinary learning opportunities are now being incorporated into the school day to help students identify their passions and learn the critical thinking skills they need to be future ready.

The Moonshot goal to redesign traditional education is worth watching. Throughout the 2018–19 school year, Tech & Learning will be highlighting different districts in the Kansas ReDesign Project and providing readers with details and information about the changes being made to positively impact students.

Stay tuned. This may be the biggest disruption to the century-old industrial age model of education.

Jerri Kemble is Assistant Superintendent for Lawrence (KS) Public Schools. She has served on the Commissioner’s Kansas Schools’ Redesign Team since 2016.