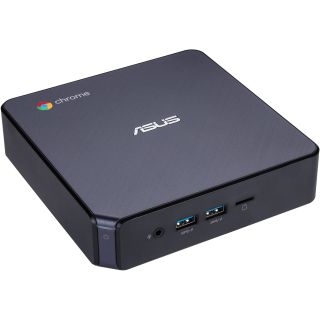 If anyone tells you that you can’t get a school computer in a small and inexpensive package, point them to the Asus Chromebox 3. At $284, the Asus Chromebox 3-N017U not only can handle a host of typical classroom tasks and display 4K video, but can be easily attached to the back of a display.

The black-and-gray Asus Chromebox 3 case may be small at 1.6-by-5.9-by-5.9 inches but it doesn’t stint on performance. The model I looked at was powered by a dual-core Intel Celeron 3865U that runs at 1.8 Ghz, which provided plenty of power for most classroom uses, from email and image editing to essay writing and spreadsheet work. Its design uses 4 GB of fast DDR4 memory modules and 32 GB of solid-state storage.

Not enough? Asus makes it easy to upgrade the Chromebox 3 with extra RAM or an SSD module of up to 256GB. The company also has several Chromebox 3 models that top out with a Core i7 processor and sell for more than $800 – about what you’d expect to pay for a PC desktop.

Flat or On a Display's Back

Like the CTL CBX1C, the Asus Chromebox 3 can sit flat on a table or upright. It comes with the mounting hardware plate for attaching it to the back of a display or screwed in under a table.

A big bonus is the Asus Chromebox 3’s HD Graphics 610 video. Unlike its peers, it can feed images to two individual displays and work with 4K video with up to 4096 by 2160 resolution. In addition to HDMI video and a USB-C port, the system’s back has two USB 2.0 and one USB 3.1 connectors. Up front, the Chromebox 3 can connect with up to other two USB 3.1 devices as well as headphones or external speakers. Its flash card reader can work with data on micro SD cards and can expand the system’s storage potential up to 256GB.

The computer starts up quickly after pressing the power button on the device’s front corner, yielding more than enough performance to for typical classroom tasks. Over the course of a month, I used it every day to create and edit a variety of Google Docs, view YouTube videos, and use classroom apps like the Desmos graphic calculator and SketchPad. In fact, it’s just as good connected to an Acer 21-inch desktop display on a teacher’s desk as feeding lessons to an Epson PowerLite 700U projector.

With a 482 score on Geekbench 5.0’s Single-Core processor tests, the Chromebox 3 is slightly more powerful than a similarly configured CTL CBX1C. It was, however, off the CBX1C when it came to the Multi-Core tests with a 859 score; the CBX1C had a slightly higher score of 916.

The big surprise was that the Chromebox 3 doesn’t use much power. It consumed 6.3 watts of power when being used and 1.3 watts at idle. If it is on for 8 hours every school day and asleep the rest of the time, the typical school can expect it to add about $2.50 to its power bill, assuming that the school pays the national average of 13 cents per kilowatt hour of electricity.

At $284 with a one-year warranty, Asus proves that good things can come in small packages. Its ability to replace most big and clunky PCs with a small yet powerful Chrome desktop shows it can take a prominent place in today’s classroom.