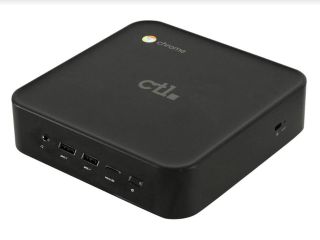 Want to turn an old display into a new all-in-one Chrome machine for a classroom, study hall, library or computer lab? I did exactly that by pairing an Acer 21-inch HD screen with CTL’s Chromebox CBX1C computer. It was not only easy to accomplish but this small investment in time and money paid huge dividends for learning.

The $250 Chromebox CBX1C is perfect for the job because it is a small, inexpensive and competent Chrome-based desktop computer. At 1.6- by 5.9- by 5.9-inches, the system takes up one third the space of the more powerful and expensive Apple Mac Mini. While the CTL system includes the hardware for mounting it on the back of the display, Apple doesn’t make mounting hardware for the Mini.

I started by removing the system’s rubber feet and then screwing the mounting plate onto the back of the display. The plate works with 100mm and 75mm VESA mounting designs, but the bolts CTL supplied were too long. I added a few washers when screwing the plate into the monitor’s back. In the end, everything fit perfectly.

After that, I slid the Chromebox CBX1C onto the included bracket and connected the computer to the screen using an HDMI cable. I plugged it all in with the included power cord and added a video cable, old mouse and keyboard.

Voila: instant Chrome all-in-one system. All the pieces were in place and I fired up the system and went through the Chrome set up routine to make it ready for students and teachers. All told, it took about 5 minutes to accomplish the transformation.

It was time well spent. I now have a compact Chrome desktop computer ready for a variety of uses. It may not have a touch screen but it’s good for anything from checking on email and doing web research to running online lessons and driving a classroom projector.

Under its dark gray skin, the Chromebox CBX1C is the right balance between power and price. At $240, the system is based on Intel’s 1.8GHz dual-core Celeron processor and has a generous 128GB of solid-state storage space--twice what most competitors offer. The system includes 4GB of RAM but adding more is as simple as opening the box and snapping in extra memory modules.

The system has a good mix of old and new ports that will help it to fit into the teaching landscape. Up front, it has a pair of USB 3.0 ports, a micro-SD card reader and a headphone jack, while the back has connections for a USB C, 2 USB 2.0 and a USB 3.0 connection. Video is sent to a display or projector with the CBX1C’s HDMI port, but the USB C port can also drive a display for turning the system into a dual-monitor powerhouse.

A bonus is the combination of gigabit wired networking, an 802.11ac Wi-Fi radio and Bluetooth 4.2 for wireless accessories. It worked well and connected on the first try to my Wi-Fi network and wired infrastructure as well as keyboard, mouse and wireless speakers.

Over a month of daily use, my all-in-one Chrome desktop never let me down. Always ready for a lesson, online journeys or just replying to emails, the CBX1C registered 476 and 916 on Geekbench 5’s single- and multi-core benchmark tests, putting it slightly behind HP’s Chromebook X2 but ahead of Dell’s Chromebook 3100. It turned out to be plenty of power to handle writing and editing Google Docs, viewing YouTube videos, drawing with Sketchpad and using the Desmos graphic calculator.

Despite its obvious place in the classroom, my homemade all-in-one Chrome system lacks a single switch to turn it on and off because the computer and screen are powered separately. To turn it on or off required reaching behind the screen to hit the power switch. There is an easy fix for this: leave it on all the time and set the system up to go to sleep and turn the monitor off after 10 minutes of idleness.

Leaving the power on all the time doesn’t sound particularly green because of the power wasted when it’s not being used. On the other hand, the CBX1C with the monitor consumes less than 20 watts when being used and as little as 1.5-watts when idle, which adds up to about $5 a year if it’s used for 8 hours every school day and the school pays the average cost of electricity in the U.S. of 13 cents per kilowatt-hour. In other words, it’s a bargain to use.

Price is the best part of the Chromebox CBX1C. It may not be the most powerful Chrome system around, but it was plenty strong enough to do typical school tasks and has more digital horsepower than an Asus Chromebit stick. The Chromebox conversion project was a real eye-opener for me in that it was simple to accomplish and upcycled old equipment into something that can advance education.