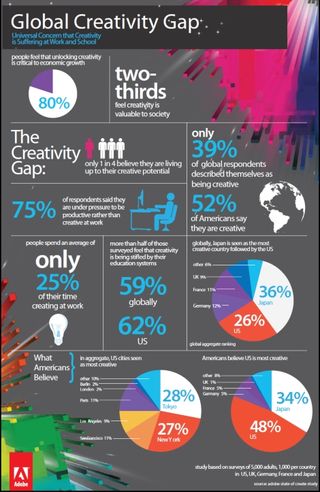 New research reveals a global creativity gap in five of the world’s largest economies, according to the Adobe® State of Create global benchmark study [PDF]. The research shows 8 in 10 people feel that unlocking creativity is critical to economic growth and nearly two-thirds of respondents feel creativity is valuable to society, yet a striking minority – only 1 in 4 people – believe they are living up to their own creative potential.

Interviews of 5,000 adults across the United States, United Kingdom, Germany, France and Japan expose surprising attitudes and beliefs about creativity, providing new insights into the role of creativity in business, education and society overall.

More than half of those surveyed feel that creativity is being stifled by their education systems, and many believe creativity is taken for granted (52% globally, 70% in the United States).