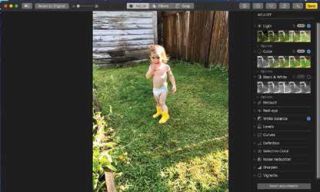 Ease of Use: The free macOS upgrade can be installed on new and older computers, including iMacs and MacBooks released in 2009 and MacBook Pro, MacBook Air, Mac mini and Mac Pro models from mid-2010 (support.apple.com/en-us/HT201475).

Creative Use of Technology: Because APFS, Apple’s new file system architecture, can address 64 bits of data at one time, it manages data significantly faster. While High Sierra still runs most older 32-bit apps, this will be the last macOS to do so.

Suitability for Use in a School Environment: Safari users will appreciate several new features, including Stop Media with Sound, which makes it possible to mute pop-up videos and advertisements. The Reader setting removes extraneous advertisements and other visual distractions and will help students who have a hard time staying focused when reading a Web page. Safari users also now have the option of preventing cross-site tracking, thus limiting content providers from using information to personalize users’ Web pages with targeted advertisements.

Other notable improvements include changes to favorite apps like FaceTime, Photos, and Apple Notes. With FaceTime 4.0 in macOS 10.13, users can take a picture as a live photo during a video call. Live photos can be useful, for example, when students are talking with an expert who’s demonstrating something noteworthy. Apple’s Photos app boasts new color and light adjustment tools for improved image editing and also allows users to call up a third-party photo editor like Photoshop from within Photos. The new version of Apple Notes does tables and allows users to Pin and Lock important notes.

In addition, information in High Sierra is synced across devices using end-to-end encryption, making transmissions more secure. New search options in Apple Mail help users find information in older messages more quickly. And those with computers that support 4K video will be able to watch them and also stream videos more smoothly with the new H.265 (High Efficiency Video Coding) compression scheme. Several Adobe CC 2017 apps are incompatible with the new APFS, and other apps with compatibility problems include AutoCAD for Mac 2015 and Microsoft Office 2011.

Overall, with its enhanced personalization and useful new features, High Sierra is a free upgrade that won’t disappoint—unless users have 32-bit applications they can neither upgrade nor do without.