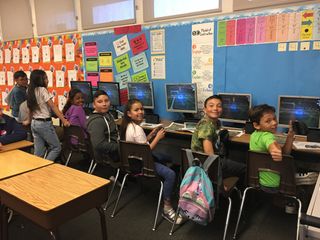 “Put down that textbook and get on your Nintendo Switch!”

Not exactly the usual convo between parent and student, but for 330 4th through 6th graders at Anaheim Elementary, their love of gaming is getting top marks.

Who: Cory Robertson, Directory of Technology

What: Creating an eSports-based Curriculum

I've been a gamer since I was five and have always been a part of the gaming community, but I noticed that the online discourse was getting more and more toxic. I worried that the culture that brought me so much joy growing up was no longer a place I could allow my own kids. In education, we have spent 20 years teaching kids how to be good digital citizens—how to hold online discussions, ignore rude/bullying posts, avoid chat rooms—yet, we don't have any formal instruction based in the gaming world. That's where our program comes in.

"Nurturing Positive Gamers" is 9-week curriculum for 4th- through 6th-graders focused on the social-emotional learning aspects of gaming. We teach kids how to maintain positivity through tough gaming interactions, how to provide critical feedback, how to deal with confrontations, and more. The program culminates in a district-wide tournament (our kids play Rocket League via Nintendo Switches), in which students get an opportunity to put to test all that they've learned.

We're seeing lots of positive results with student behavior and confidence. Many participants who many not have been excelling in traditional ways in the classroom have become leaders of their Rocket League Team. Students who were constantly talking in class have become Shoutcasters and now have an entire auditorium of 400 adults laughing and yelling along with them as they broadcast from the stage. Our teachers advocated for these students to be a part of the program and, with almost no exception, those kids have become leaders, role models, and have something to be proud of at school. They felt success during a school day in a way that they rarely ever do.

Games are a great place to express yourself. Like to draw? Love music? Interested in the functions of technology and audio-video systems? There’s a career in gaming for you. It’s all about choice and options, and making sure every child in our district knows they have a place in this world.

One of the biggest challenges was getting parents on board. I heard quite a few parents say different versions of, "You mean I spend all my time at home telling my child to NOT play video games, and now you're asking them to play at school?!?"

To address this, we held parent meetings. Once we explained the job opportunities, the college scholarships, and the reality that their kids will play games online—and that we are ensuring that they do so in a positive way—we had more than a few parents say that they wished we'd started earlier. Based on that feedback, we are exploring a modified version of the program for younger kids.

For students under 13, there are state and federal restrictions on what platforms we can use so as to avoid inappropriate content and communications. This effectively ruled out Playstation, Xbox and PCs. Nintendo Switch inherently blocks all online communication, and the ad hoc wireless options makes the eSports program portable and systematically feasible for our large district (23 sites, more than 16,300 students).

Start small. We've held gaming tournaments (through coding) for a decade so it was easy for us to add this layer to an already established program. If just one teacher is excited by this, then start it up!

Don’t be afraid to reach out to industry representatives. I found veteran professional gamer JoMo Senpai simply watching Twitch on a Friday night with my boys. I reached out to ask if I could use one of his videos in our lesson. Not only did he say yes, but he offered to speak to our kids and may come to do in-person coaching with our Shoutcasters. We also reached out via Twitter to Psyonix (the developers of Rocket League, or "dev"), caster Adam "Lawler" Thornton, and others. People involved in the industry know that the future thrives on the kids who are playing now, and that we all benefit from our kids learning.

We paid for the technology utilizing general funds. The total cost for the six schools was $12,000. The curriculum was created in house.

Google Meet (to stream our lessons)