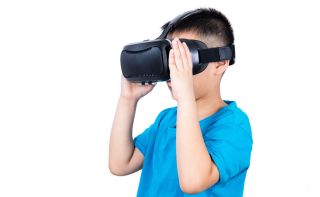 VR immerses the user in a 3D environment in which they hear, touch, smell, and taste stimuli. Students interact either through a traditional desktop and VR software or wear a head-mounted display (HMD) and data glove. AR enhances physical content with 3D effects so that users remain external observers and observe the augmented effects through apps such as Google Lens.

The challenges implementing VR and AR are mostly logistical and technical. Qualified staff and plenty of space is required for VR, plus users can become easily distracted and need to be trained in digital competencies. Apps entail data security and privacy issues. Equipment can also be expensive.

Examples of VR and AR being used to help students with disabilities abound. Teacher Veronica Lewis uses Google Chromecast to enlarge images for visually impaired individuals, and employs VR screen readers, such as VoiceOver and TalkBack, that describe the environment with information from alt text in the images and videos. Morehead State University researcher Sue Parton has shown how deaf students benefit from Google Glass and from video and 2D barcode camera phone scanning. In The Deaf and Dumb School in Gujarat, India, where some students don’t recognize their own names, staff uses VR images processed through a program called Foton to teach them. Multiple studies have shown that VR and AR help users on the autism spectrum recognize facial emotions and improve their social skills.

For learning disabled individuals, AR can improve vocabulary through gamefication. In India, educators have created an interactive textbook that uses 3D images, audio clips, and videos to explain text. Other studies show how VR has been effectively used to improve social anxiety, language deficiencies, attention deficit hyperactivity disorder (ADHD), physical or motor disability, cognitive deficits, dyslexia, and Down syndrome, among other disabilities.

At the 53rd St. School in Milwaukee, Megan Rierdon, a special needs educator, uses Google Earth VR for field trips. “The kids sat down in a chair, put on a virtual reality headpiece and saw a tour walking around an entire greenhouse,” Rierdon told the Milwaukee Journal Sentinel. “[They] were reaching down to touch the dirt and waving to the people they saw.”

Too much sensory overload? At the Perkins School of the Blind relaxing 360-degree videos of animate or inanimate objects or locations is used to calm students.

More Promising VR and AR Options on the Horizon

With developments in VR and AR on the rise, applications are immense. For example, a team of researchers at the University of Michigan are developing iGYM, an augmented reality system designed to teach wheelchair-bound children community-level sports.

Developers are also beginning to prioritize accessibility during design, leading to lighter headsets and more user-friendly controllers, among other gear, for users with physical disability; appropriate color choice, audio descriptions, and text and image magnification for children who are blind; and clear transcripts and closed captioning for users who are deaf or hard of hearing.

Ultimately, teachers will be able to use virtual and augmented reality to make a classroom environment that fits the needs of any student.

Leah Zitter, Ph.D., is a High-Tech Writer and Research Scientist.