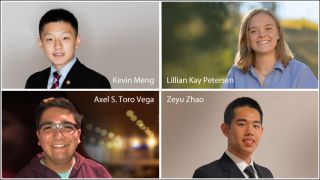 The Association for Computing Machinery (ACM) and the Computer Science Teachers Association (CSTA) announced four high school students were selected from among a pool of graduating high school seniors throughout the U.S. for the Cutler-Bell Prize. Eligible students applied for the award by submitting a project/artifact that engages modern technology and computer science. A panel of judges selected the recipients based on the ingenuity, complexity, relevancy, and originality of their projects.

The Cutler-Bell Prize promotes the field of computer science and empowers students to pursue computing challenges beyond the traditional classroom environment.

The winning projects illustrate the diverse applications being developed by the next generation of computer scientists.

Two years ago, Kevin Meng’s grandmother suffered from a slip-and-fall injury that resulted in skull fracture. This accident, which was suffered out of the view of cameras, got Meng thinking: what if we could see through walls? In his project, Meng uses VisionRF, a deep neural network  model that accepts raw radio frequency signals and outputs continuous video of 15-point human skeletons behind obstruction. Because radio camera data on its own is harder to analyze, analysis through Raspberry Pi-based programming supports mobile, real-time interference.  This results in accurate and complete predictions of the human skeletons. The implications of this project are broad and can be used to support military operations, monitor the health of patients non-invasively and aid first responders in search and rescue missions.

Lillian Kay Petersen’s younger, adopted siblings faced food insecurity in their previous homes. Inspired by their experiences and the news of crop failures in Ethiopia, she became determined to help aid organizations in increasing food security in developing countries. To accomplish this, Petersen developed a tool to inform cost-effective nutrition interventions in sub-Saharan Africa, inclusive of predicting grain harvests, predicting acute malnutrition prevalence and optimizing the supply logistics of specialized nutritious foods. The tools can be adjusted to include-real time data, enabling aid organizations to adjust distributions accordingly. As the result of her work, Petersen was invited to speak at eleven aid and research organizations, including USAID, the USDA and the International Food Policy Research Institute. She was also an invited speaker at multiple conferences, including the 2018 and 2019 CGIAR Big Data in Agriculture Conventions in Kenya and India.

While identifying topics for his research project, Axel Toro Vega read that more than 36 million people in the world are visually impaired and more than 217 million have some type of severe visual impairment. Toro Vega created an initial prototype consisting of an ultrasonic sensor mounted onto a pair of glasses. He continued to test different sensor arrangements and tweaked the software for a simple and efficient user experience. After gathering additional feedback after a presentation at the Intel International Science and Engineering Fair, Toro Vega took his prototype further by integrating artificial intelligence. This project made Toro Vega realize the great accomplishments that can be reached through computer science and the core meaning of CS for Good.

Inspired by his grandfather who is facing chronic kidney disease, Zeyu Zhao began researching the kidney exchange system in the U.S. and was shocked to learn that 3,000 kidneys are wasted each year and 13 people die daily, in part, due to failed matches. Zhao wanted to use computer science — specifically machine learning — to improve the current kidney exchange system. He created a data-driven approach to solving the kidney matching problem through the designation of a Graph Neural Network to guide a Monte Carlo Tree Search. Zhao identified baselines for his project and tested his algorithms against this baseline, thus improving the current kidney exchange by developing a data-driven approach to finding matches. The research from Zhao’s project could be extended to other applications, such as operations research.

CSTA and ACM would also like to recognize Raghav Ganeth, who received an honorable mention for his project “Precision Medicine for Lupus Nephritis: Predicting and Profiling Patient Response to the Euro-Lupus Treatment Regimen through RNA-seq derived Transcriptomics and Machine Learning.”