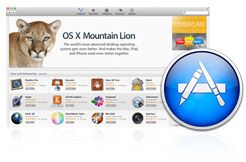 Mountain Lion (updated to OS X 10.8.1 on August 23, 2012) takes many of its new features from Apple’s mobile operating system, a convergence that began with Lion OS X 10.7 in apps such as Launchpad, support for direct multi-touch gestures on both the MacBook trackpad and Apple’s stand-alone trackpad, full screen apps, and notable options like Auto Save and Resume. With Mountain Lion, there are now even more similarities to iOS 5.1 because the familiar Notes, Reminders, and iMessage apps are fully integrated stand-alone utilities that work seamlessly with Apple’s popular Mail, Contacts, and Calendar applications. Additionally, in Mountain Lion, Reminders and Notifications can be configured to pop up on your Mountain Lion desktop/laptop while you work. Or, they can be configured to display when you arrive at a particular location because “notifications” are monitored by Apple’s Location Services (the combination cellular, Wi-Fi, and GPS network technologies used by apps such as Camera, Safari, Maps, and Find My iPhone to track your computer’s current location) (see below). Another similarity between OS X and iOS is that Mountain Lion delivers improved support for Apple’s cloud-based iCloud service, enabling users to upload, view and access their iCloud media, documents, and other resources just as they might do with their iOS devices.

The hardest part of upgrading to Mountain Lion could be that your older Apple computer may be unable to make the transition. I experienced this digital brick wall when I discovered that the OS would not install on my 2006 Mac Pro. Many schools face similar upgrade ceilings with iMacs purchased before mid-2007, MacBooks purchased before late 2008, MacBook Air computers bought before late 2008, and Mac minis bought in 2008. In the end, I installed Mountain Lion on a more recently purchased MacBook Pro (MacBookPro6,1).

As with Lion (the previous OS X), Mountain Lion is unavailable as a boxed product on DVD. You must obtain your copy online through the Apple store. To make the purchase, you’ll need an Apple ID, a credit card (or a “Redeem” code), and a fast Internet connection. If purchasing with a Redeem code, visit the Mac App Store, sign in, click Redeem in the Quick Links section, and follow the prompts to enter the code. The Mountain Lion installer downloads to the Mac’s Applications folder and also appears in the Dock while downloading.

If you plan to install the OS on multiple computers, you’ll want to drag the Mountain Lion installer from the Applications folder to your computer desktop before installing. From there you can create a bootable USB Mountain Lion install disk on an 8GB or larger USB flash drive (http://arstechnica.com/apple/2012/07/how-to-create-a-bootable-backup-mountain-lion-install-disk/). If you prefer not to make a bootable flash drive installer, clicking the installer that saved in the Applications folder is virtually all you need to do to install the new OS, provided your computer is running either Snow Leopard (10.6) or Lion (10.7). Be sure to leave enough time for the download as Mountain Lion is 4.35 Gb in size.

One additional recommendation before installing is to check the list of Mountain Lion-compatible software applications available at the Roaring Apps wiki Web site (http://roaringapps.com/apps:table). If software you are currently running isn’t compatible, a fix might be available directly from the software developer. If no fix is available, know that Mountain Lion will most likely move the offending application to an “Incompatible Software” folder at the root level of your hard drive during installation.

Once installed, you’ll quickly notice that Mountain Lion doesn’t look significantly different from Lion. This similar look will facilitate the transition to the new operating system. There is however, much to explore and “enable” in the new OS X, as Mountain Lion boasts nearly 250 additions or improvements. In this review, I address just a very few of the most relevant for education. To learn more about all Mountain Lion improvements, consult the list of suggested resources included in this review.

Creative Use of Technology

While Mountain Lion offers several impressive new features, many of them are quite subtle. These include the Privacy tab of the Security and Privacy pane (System Preferences), the Dictation capability available through the Dictation & Speech System Preference (see below), and the Notification icon that appears in the upper right corner of the Finder’s Menu Bar. Three other new Mountain Lion features however, provide significant benefits to educators and students.

1) AirPlay Mirroring: Although this technology has been available for iOS since version 4.2, with Mountain Lion it becomes fully integrated into the Mac OS. When enabled, it allows Mac to broadcast audio and video data from the desktop or laptop to an Apple TV connected to a large screen HDTV. Information streams wirelessly. This can be used to great advantage in the classroom if you want to share iTunes media or movie files. It allows Mac laptop users to deliver computer content and video playback without being tethered to an LCD or DLP projector at the front of the room. AirPlay Mirroring is also useful for “teachable moments.” You can invite your students to explain a lesson, solve a math problem, or share a homework assignment on the big screen directly from the Mac laptop circulating the room. Just remember that audio is unavailable when showing a screen using AirPlay Mirroring, unless whatever you’re demonstrating supports audio over AirPlay and you also connect the Apple TV to wireless speakers that support AirPlay.

2) “Dictation” is another Mountain Lion improvement that will find favor with educators and students. Dictation first appeared in iOS on the iPhone 4S. It requires a broadband Internet connection and a microphone. In Mountain Lion you can turn it on through “Dictation & Speech” in System Preferences. On a Mac desktop or Mac Mini, you must connect an external microphone; on Macintosh laptops you can use the computer’s built-in microphone.

When activated, Dictation works with any Apple application that accepts text. It also works with Microsoft Word 2011 and Apple Pages. Users “type” text by speaking it into the microphone. Everything spoken is captured. When you click “Done,” dictated text appears magically. What you dictated was sent to Apple over the Internet where it was converted to text and sent back to you. Users must tell Dictation how to treat punctuation (e.g. to end a sentence say “period,” “question mark,” or “exclamation”). To insert a comma or semi-colon, say “comma” or “semi-colon.” Mountain Lion’s Dictation feature may be very helpful for tired or struggling writers.

Suitability for Use in a School Environment
Some Mountain Lion features may be more useful for personal computing than for education. For example, Mountain Lion, like Lion before it, is only available as a download from the App store. Downloading such a large file takes a long time. Having to download more than once will be problematic for schools that want to install it on several computers. For multiple installations, create bootable flash drive with the installer and move it from one computer.

Downloading such a huge installer file will also prove challenging in homes without broadband Internet access. If you’re a user without broadband, it’s best to try and access broadband elsewhere. Then you can download it to the desktop and create a bootable flash drive containing the Mountain Lion installer.

Some Mountain Lion improvements may be problematic for schools. For example, many schools prevent students from engaging in “chat.” Yet Mountain Lion features Messages, the application that replaces iChat. Your tech department will look for ways to prevent users from signing in or enabling a Messages account. Even if Messages is not disabled, one unanticipated “gotcha” using the application will occur if several computers or iOS devices use the same Apple ID. All Message conversations “chatted” by an OS X user with that Apple ID can be viewed and continued on a device sharing the Apple ID. Additionally, if a user with an Apple ID stores documents, photos, media files and other resources in the “cloud” using the iCloud service, those resources will be available to all users with the same ID.

Problems might also arise with the new improved Notification Center delivering notifications from various applications, Notes, Reminders and iCloud. The notification pop ups may prove distracting for student users. They may also invite students to install application updates even though installing software is not a school-permitted activity.

Finally, Mountain Lion boasts a new Game Center social gaming network that Apple ID users can access to play games, download new games and play with friend. Many schools do not permit students to play non-instructional games or to engage in game playing without teacher supervision. Management of Macintosh desktops, laptops, and iOS devices by a district or school IT department will require careful planning according to the school or district’s acceptable use policy.

OVERALL RATING
Mountain Lion scores high points for ease of use, new features to support teaching and learning and improved accessibility for adults and students requiring special accommodations for information access. Moving between iOS and OS X will also be easier for those Mountain Lion users who also work on Apple devices other than Macintosh. If your school uses older special purpose software incompatible with Mountain Lion, you’ll want to hold back on upgrading all machines to the new OS X.

Here is a list of several books and ebooks for new Macintosh users or individuals upgrading from previous versions of the Apple OS X:

Carol S. Holzberg, PhD, cholzberg@gmail.com (Shutesbury, Massachusetts) is an educational technology specialist and anthropologist who writes for several publications and works as the District Technology Coordinator for the Greenfield Public Schools (Greenfield, Massachusetts). She teaches in the Licensure program at the Collaborative for Educational Services (Northampton, MA) and the School of Education at Capella University. As an experienced online instructor, course designer, and program director, Carol is responsible for developing and offering training programs and support for faculty and staff on technology for teaching and learning. Send comments or queries via email to: cholzberg@gmail.com.