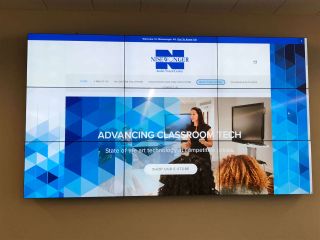 Georgia’s Foothills Education Charter High School is a public charter school offering students an opportunity to earn an accredited diploma in a non-traditional setting. Established in 2015 to service five counties and two state prisons, the school has since grown to a total of 16 locations across the North-Middle Georgia region. To accommodate this growth and make room for Foothills’ additional district partners, the charter school recently relocated its regional office from Madison to a newly renovated building in Athens.

From the planning stages, a main focus in the school’s new office was technology, especially when it came to providing teacher training and holding meetings and presentations. The governance board envisioned a multipurpose room outfitted with an AV system that would allow users of any technological skill level to operate it easily. To turn its vision into reality, Foothills turned to Nisewonger AV, an Atlanta-based AV integrator that specializes in educational technology integration.

While Nisewonger AV initially considered using a projection system in the Foothills’ multipurpose space, it became clear that the size of the room and the amount of natural light coming in wouldn’t allow for the high resolution and brightness levels required. Instead, the company opted for an LG LV35 video wall consisting of nine 55-inch displays in a 3x3 configuration.

“Just Add Power has proven to be extremely reliable in other video wall systems we’ve installed,” said Adam Yates, vice president of business development at Nisewonger AV. “For example, we provided a very large video wall for another school that includes 40 pieces of hardware. It’s been running 24/7 for over five years and in that time we’ve only had to replace two pieces.”

All video sources in the room’s lectern are connected to J+P’s VBS-HDIP-718AVP and VBS-HDIP-749A 3G+ AV Pro transmitters, while each display in the video wall is outfitted with a VBS-HDIP-508POE receiver. The J+P system supports 4K Ultra HD resolutions and HDMI 2.0 devices with HDCP 2.2. It enables seamless switching between any resolution HDMI sources, and distributes Dolby Pro Logic II audio. Video wall functionality is built-in for displays installed in portrait and flipped configurations, as well as image push, pull, and pop features. An integrated scaler on the receiver automatically adjusts the picture to fit the screen. Expanding the system with an additional screen or source is as simple as adding another receiver or transmitter.

Control over the room’s technology is provided by an RTI control system, which is powered by the company’s XP-8v processor. A CX7 7-inch touchpanel is located at the lectern. With the help of Just Add Software, Nisewonger AV created a customized user interface for the touchpanel that allows any user to operate the system with the touch of a button.

“Everyone who’s come into the office has been very impressed with the video wall, and it’s certainly been put through its paces,” said Leo Satara, technology coordinator at Foothills Education Charter High School. “With the system being available for all of our school district partners, it gets a lot of use — whether it’s for governance board meetings, collaborative activities, or teacher training. Everything has gone off without a hitch, which speaks volumes to the system’s ease of use and dependability.”