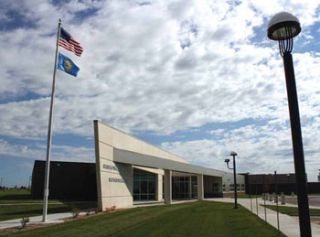 The Sioux Falls School District in South Dakota created its Career & Technical Education Academy to give vocational high school students industry-relevant education. So when it came time, in 2010, to equip the newly built CTEA’s media production department, Sioux Falls pulled out all the stops to create an all-HD TV studio facility.

The results the district achieved by working with systems integrator Alpha Video & Audio of Minneapolis are “a teacher’s wildest dream,” says Nancy Sutton Smith, the CTEA’s media production teacher. “Because of the quality of the equipment and production experiences our students have access to, they graduate from here with their first year of college-level mass communications already under their belts.”

“Our goal is to provide CTEA students with opportunities for realworld career exploration at no cost to themselves,” explains Jeff Little, the academy’s media equipment specialist. “This is why it is so important to have a true state-of-the-art all-HD teaching facility. The students here get to work with technology that reflects what is current in the industry— in fact, better than what is being used in a lot of commercial TV stations right now. That makes them attractive to employers, who hire them directly after graduation.”

“I teach my students skills that they can use to find employment, plus generate extra income for themselves by shooting and/or editing weddings,” says Smith, a 30-year veteran of commercial television. “With today’s home-computer technology and the popularity of sites such as YouTube, there is no reason they can’t strike out on their own.”

The CTEA’s TV production facilities would do any medium-market commercial broadcaster proud. The all-HD master control room looks into a fullsize three-camera TV studio. Mounted side by side above the bank of windows facing the studio are two LG 42-inch HDTV monitors that serve as a virtual monitor wall.

In addition, two classrooms are set aside for editing and instruction. One of these has desktop video-editing stations; the other allows students to plug in their laptops for editing and Web access. Add three storage spaces, offices and a lobby that connects to the academy’s main hallway and the result is a self-contained TV station.

Learning Opportunities for Everyone

One of the most striking features of the CTEA’s master control room is how spread out the operator functions are. For instance, a long counter beneath the windows hosts the video switcher, audio board, and graphics and video playback stations with room to spare between them, so that each requires a separate person to be dedicated to it; the complex’s other functions are laid out similarly.

This layout is no accident. “With a class of students to teach and keep busy, it makes sense to break up the functions so that everyone has a job to do,” says Todd Johnson, the Alpha Video sales engineer who oversaw the academy project. “We want them all to get hands-on experience and stay engaged. Sharing responsibilities makes this happen.”

The Sioux Falls School District didn’t stint when it funded the Career & Technical Education Academy. The three studio cameras are JVC GY-HD250s with 16X studio lenses. “These cameras were the best combination of 3 CCD HD capability and price,” Johnson says. “We equipped them with JVC 8.4-inch studio viewfinders, proper CCU units, and broadcast- quality Vinten Vision Ped Plus studio pedestals. A lot of teaching facilities try to save money by putting fixed tripods on dollies, but the school district wanted the real thing for its students.” All the JVC cameras have Autoscript 15-inch color camera prompter kits that are fed by Autoscript WinPlus S prompting software.

Video routes by means of a Broadcast Pix Granite production switcher and router. A Mackie Onyx 24-input mixer handles audio. Recording and playback is done to hard disk and Sony HDV video recorders/players (for playing back video shot in the field). The PCs are Dell, and a Telex intercom system links the studio.

The CTEA’s 20 editing stations have HP desktop PCs running Adobe Premiere Pro, After Effects, and the CS5 Production Suite. Video is stored on external 1TB LaCie drives on each PC, all of which are with the school’s servers.

Field video is shot with HDV and mini DV cameras. “The students have access to a variety of cameras,” Little says. “They are primarily Canons and Sonys.”

Most school districts are strapped for cash, and Sioux Falls is no exception. But, happily, this wasn’t a problem when the CTEA was funded. “We had the money we needed to do the job right, without having to compromise on less-thanindustry equipment,” Jeff Little says. “This ensured that the facilities were designed and built properly.”

It also helped that Alpha Video was involved with the project from day one. “We were brought in before the building was put up,” Todd Johnson says. “As a result we were able to work with the general contractor to make sure that cabling and power outlets were put in the right places. This made installation far easier and eliminated delays.”

Things went so well, in fact, that the TV facilities were ready for the 2010–2011 school year. “Everything went really smoothly and stayed within budget,” Johnson says. “Everyone was happy with the results.”

Finally, the best news is that the students being trained at the CTEA are gaining marketable TV skills that will help them get jobs after graduation. Already local stations have hired eight of them as part-timers, Nancy Sutton Smith says. “Thanks to our cuttingedge facility, they really know how to shoot, edit, and post-produce video,” she says. “This is career education that truly works.”

THE GOODS Interactive displays that put users in touch

TOUCHSCREEN DISPLAY
The technology of the Samsung 650TS enables touch-sensitivity all the way to the edges of the screen. samsung.com.

INTERACTIVE DISPLAY
The Hitachi Software StarBoard T-19WX gives you the ability to add interactivity to your digital lectures. Write notes on the display using a wireless pen, while students view the same visuals projected onto a large screen through your computer and a projector.hitachi-soft.com.