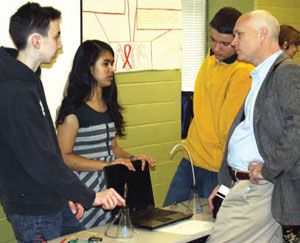 School systems across the country are answering the call by the Obama administration to increase STEM opportunities so students can develop the scientific, technological, and mathematical skills necessary to succeed in college and tomorrow’s workforce.

Tech Valley High near Albany, New York, is a prime example. It is a regional public high school with a STEM focus that is open to students in 47 school districts throughout seven counties in the New York state Capital Region. Utilizing a project-based and studentcentered learning philosophy, the tiny 100-student school contributes to the high school reform movement while teaching 21st-century skills and abiding by New York State learning standards.

“People were apprehensive that with this approach, the kids would have difficulties getting into college,” principal Dan Liebert says. “We have kids in the Ivy League, Cornell, NYU, University of New England, as well as SUNY colleges, many of whom achieved early action or early decision, so that myth has been put to rest.”

The school garners more than 100 applicants to fill the 40 incoming slots each year and has an annual waiting list. “Our students come from a random lottery, but they want to be here,” Liebert says. “One student rides a bus two hours each way to be at school. As a principal, you want students to be engaged and self-directed, but tell a 14-year-old who’s been sitting in rows, listening, for eight years that they have to be responsible for their own education and they won’t know what that means. You have to give them opportunities to direct their own learning projects. We give them the responsibility to handle a laptop on a one-to-one ratio and find someone in the community doing what they are interested in.”

Great emphasis is put on creativity and innovation as the school not only prepares students to succeed within the New York Regents and Advanced Regents diploma system but guides them in acquiring realworld experience through extensive partnerships in the business community. “One student interested in environmental science shadowed an exec at a paper-manufacturing plant with a zero carbon footprint freshman year; worked with a baker using applied sciences her sophomore year; interned at an architectural firm for two weeks as a junior; and completed a semesterlong mathematical study at a hospital her senior year, running statistics on success rates of certain procedures,” Liebert says. “By the time the kids are juniors and seniors, their ability to be articulate, self-aware, and self-directed is enormous. The proof is when they go one-on-one with an industry executive. Their comfort level talking with the executive and discussing their education is very powerful to see.”

A wealth of businesses and government agencies help design, teach, and assess team projects that students tackle to solve problems both theoretical and concrete. This exposes students to valuable in-the-field elements of prospective occupations, like hiring, operations, and policy, and projectdesign work.

Making connections between reallife problems and concerns that kids can relate to fosters out-of-the-box thinking within the confines of scientific theory and processes. “Probing the Hudson”—or as it is known around Tech Valley halls, “Is the Hudson Nasty?”— determines whether the Hudson River will be safe for swimming next year.

“You can teach data-collection procedures, how to analyze data; make scatter graphs; and publish an investigative report out of a PowerPoint presentation or textbook, or you can teach them on the river,” Liebert says. “We start with the end point: How would you make the Hudson healthy? They have to determine what they need to know to answer that, starting with questions: Would you drink the water? Would you eat a fish from that river?”

Along with experts at the Beacon Institute Center for Advanced Environmental Technology, the Hudson River Basin Watch, and the New York State Department of Environmental Conservation, students integrated analysis and scientific inquiry and used the proper informational technologies and applied mathematics to meet New York State Math, Science, and Technology Standards 1, 2, 3, and 7.

“We measure our students on cooperation, communication, and critical thinking as well as content, a wider spectrum of learning outcomes than just test scores,” Liebert explains. “Universities and heads of industry really respond. By the time the kids reach their junior or senior year, they have had many interactions with industry people in pharmaceuticals, chemical materials, nanoscience, and emerging technologies as well as alternative energies, like solar and geothermal power.”

Teachers utilize digital project briefcases to build curriculum and store project plans. Students have access to their own server and email accounts. By using the latest tech to communicate collaboratively with team members and compile their data and findings, they create an eportfolio that showcases their work so that it can be assessed by current teachers as well as prospective higher-level admissions boards and employers.

“Never in four years have I had to answer the question ‘Why do we have to learn this?’” Liebert says. “It’s no longer sufficient to teach to content only. You have to deliberately teach skills that will help them in the workplace and in higher education: the ability to problem-solve, to think critically, to apply what they know. With the preparation the kids have received after four years at Tech Valley High School, we are 100 percent confident they are ready for anything.”

With such impressive success achieved through this hands-on, projectbased approach to STEM integration, Tech Valley High School has proven the rule that STEM works.