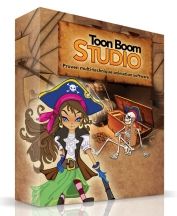 Toon Boom Animation has expanded on and improved its selection of animation software, with the addition of Flip Boom All Star and more advanced features in Toon Boom Studio.

Quality and Ease of use
Since there are three products, this section will compare the benefits of each:

Flip Boom Classic is easy enough to be used by younger students, yet it provides all the tools you need to make a very simple animated film. Instructions are clear and concise, and the large, improved and more colorful buttons are identified with a quick mouse-over. It has very basic controls and simplified layout, similar to that of a children's drawing kit; a large workspace is flanked on the left by three sets of tools that can be hidden or brought forward for use and a color palette, on top is a toolbar, the drawing sequence of frames is on the bottom, and tools to record, play, and save the work are on the right. Drawing tools simply include a brush, fill-tool, and eraser. Version 5.0 now includes over 75 new templates and a library of over 100 sounds, each organized into themed sets. Students simply draw frames, using the previous frame as a guide, add sound effects from the sound library or record original sounds, run them together to form a cartoon, then save finished work or export it with one click to an iPod, to YouTube, or FaceBook, as a Quick Time or Flash video, or to a printer as a flip book.

Flip Boom All Star is the newest addition to the Toon Boom lineup, and it provides more features for upper elementary or secondary students. Like Flip Boom Classic, the user interface resembles other familiar drawing programs, with standard draw-and-paint tools to the left of the drawing space, but this program includes a brush, pencil, paint can, rectangle, ellipse, straight line and text. To the right is the color palette of fifteen colors plus a color wheel for altering them, and the properties that control brush size and smoothness, and the library. Artists can import over 1000 digital pictures, or drag-and-drop animation-ready drawings from the extensive clipart library, or create original drawings. The foreground and background frames are displayed separately in the drawing sequence at the bottom, and frame speed per second is variable. Titles and credits are a snap to create with a variety of fonts, colors and animations. Users can import and edit sounds from an impressive variety of formats, including AIFF, Wave, MP3, SUN uLaw or M4a files. All or a section of finished projects can be uploaded directly to Facebook, YouTube or iPods, or as a QuickTime or Flash file with the click of a button.

Toon Boom Studio is probably most appropriately used by high school students and hobbyists as it is the most sophisticated of the three programs, featuring the most professional tools and publishing options.For the casual user, the interface can be overwhelming, but the professional user can create content by drawing digitally, scanning paper drawings, capturing live images or importing existing artwork. Toon Boom Studio 6.0 provides a variety of animation techniques, including traditional paper, traditional digit, cut-out, rotoscoping, and stop-motion, and expands its animation capabilities even further with bone rigging features. This technique allows animators to add segments and joints to characters with a point and click, to make movements much more realistic and easier to control in the timeline. A skeleton effect layer in the timeline and bone templates that can be reused on several characters are convenient features that speed up the animation process. Audio tracks can be aligned to the animation more professionally with lip-sync capability, and the multiplane camera allows the artist to change perspective in real time as well as zoom in on scenes from a variety of angles, to create a truly 3D animation. Projects can be published for print, TV, HDTV, the Web, Facebook, YouTube and iPod/iPhone/iPad. Studio 6.0 also boasts several software improvements and bug fixes. Help is provided in a 432-page searchable guide.

Creative Use of Technology
All three products use traditional animation principles and intuitive design to make animation fun and easy for a particular group. All allow users to create very basic animations, or to explore and add creative touches and personal creations to the artwork. All make it very easy to upload finished work to the most popular networking tools, and to share with the world.

Suitability for Use in a School Environment
The Toon Boom products all include curriculums that can be used in Artistic and cross-discipline areas. Animation can be used both to teach and as an assessment tool in any subject, while allowing students to learn to work collaboratively to develop real-world communication, logical thinking and self-expression skills, using a tool that is often found in 21st-century digital workplaces. Since the products can be easy enough for an elementary student, or challenging enough for an advanced high school student, one of the Toon Boom titles is suitable for any school environment. Toon Boom Studio may be used to introduce professional animation, storyboarding and film-making, and allows teachers to correct or comment on work in an annotation layer.

How It's Done: Remote STEAM Learning with LEGO Bingo Boards