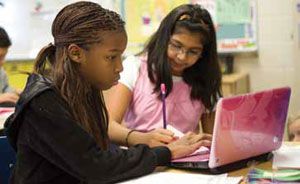 At Osseo Area Schools, BYOD started in classrooms and spread from there.Proponents of “bring your own device” (BYOD) programs like them for a lot of reasons: budgets keep dwindling, students already bring devices to school, and technology isn’t getting cheaper. “People are saying ‘It’s happening in the real world. Let’s mirror that in our schools,” says Lucy Gray, project director ofthe Leadership for Mobile Learning (LML) initiative at CoSN, the Consortium for School Networking.

But this article isn’t meant to convince readers to try BYOD. It’s about how to make it work once you’ve decided it’s the way to go. Here are the methods three districts took to make BYOD happen.

The tech team at Lake Travis (TX) Independent School District began planning for BYOD last year by discussing it with administrators, principals, and the cabinet. “We also did a community chat in the spring,” says Sean Casey, assistant superintendent, technology & information systems services.

The most affluent families provide devices for their children, low-income families are given devices purchased through the latest bond package, and middle-income families can purchase or lease devices at a discounted price, which Casey arranged with various vendors. When it came time to update the AUP and student handbooks, Casey was pleasantly surprised to discover that revisions were unnecessary. “We had already updated for social media, cyberbullying, and safety, and none of that changes because the kids are on a personal device.”

Last summer, more access points were added to the wireless network, along with anchor mobility, which is offered through Cisco. “The network recognizes if you are not on a district wireless device and routes you into tunneled Internet access at no extra cost,” says Casey. “We have no security concerns since everything goes through our filtering.” Once they are online, students log in to the district’s online learning portal—a one-stop shop for online textbooks and digital resources.

Already, 700 people (about 10 percent of the district) are participating in BYOD, with that amount growing every week. “We have not made a large push yet. We want teachers to be successful with classroom management and making a successful activity using that technology.”

To help teachers along, Casey created an online repository for BYOD activity/lesson sharing (www.epsilen.com/crs/1130693) in Project Share, Texas’ statewide LMS. There’s a wiki to discuss ideas and a Dropbox folder for completed lessons.

New Canaan High School students productively working on their own devices.During the last couple of years, Lake Travis began working with YouTube and other social media tools. This year, the district rolled out My Big Campus, from Lightspeed Systems, which offers content from such sources as TED.com, Khan Academy, and MIT OpenCourseWare. “If we can package content that is platform agnostic, students can use it as a guided activity, for an independent lesson, or for review. With BYOD, we can extend the day and give students the benefits of a flipped classroom.”

The tech staff at New Canaan (CT) Public Schools knew students would bring in their cell phones, so they created an open environment to support that. “When we updated our AUP we made it clear that this is acceptable but limited to using devices for academic purposes,” says Robert Miller, director of technology.

Now, students and staff fill out a Google form with their device’s MAC address and a statement that they will comply with the AUP. Their device is registered on the network within 24 hours.

Last year, about 35 percent of the district participated in BYOD; this year it’s up to 45 percent. Much of the faculty brings in their own devices, too.

Miller says those against BYOD tell him he’s opening his network to risk, but he hasn’t had problems. Because his wireless and wired networks are separate, he can shut down either network if he needs to, as was the case last May when the middle school’s wired network was hit by a bad virus.

In terms of equity, which is another reason many schools are against BYOD, Miller says that special education students used to be embarrassed to bring their assistive devices into classes. His team believed that if all students had devices, those students would no longer feel out of place. “We’re at that point now,” he says. “You walk into a classroom or the library and lots of kids have devices. There’s no stigma anymore.”

Essentially, BYOD at New Canaan is about respect. “Our students know it is a privilege. They are allowed to use Facebook and other social networking tools. They don’t want to abuse it.”

Tim Wilson, chief technology officer of ISD 279 - Osseo (MN) Area Schools, calls his district’s approach to BYOD “organic.” When it started three years ago, it was at the classroom level. At each school there are anywhere from one to ten BYOD classes. A teacher decides to introduce BYOD and consults his or her colleagues and principal.

Because of the low-key approach, Wilson offered only a one-day, summer PD class, but teachers told him it wasn’t necessary. “From an instructional standpoint, our teachers aren’t teaching differently than if they’re using a laptop cart,” he says.

The reason why instruction hasn’t changed is because Osse is a Google Docs district. “We couldn’t do this without Google Docs or our Moodle,” says Wilson. “It doesn’t matter what type of device the kids have, as long as it has a browser, can get on the open wifi, and get to our Google Docs domain.”

Many students share devices. Wilson says if you get one-third to one-half of your students bringing in a device, you’ll be in good shape. “We provide a robust, reliable, secure infrastructure and the kids bring what they need to connect to it for learning to take place.”

In December, Oseo Senior High became the first BYOD school in the district. “That’s the tipping point,” says Wilson. “Enough classrooms are already doing it so this made sense. I expect to see more schools doing that this year.”

The Time for Horizontal PD

When Kevin J. McCormack’s boss told him to look at the iPad a couple years ago, he was hesitant. But as more apps came out and he heard what people were doing with them, he stopped leasing PCs and began leasing iPads.

McCormack, the principal of Xaverian High School in Brooklyn, N.Y., knew that a technology this different required a new way of doing PD.

He started by giving iPads to 20 of his younger, most tech-savvy teachers. By the time the next shipment of iPads arrived, 70 teachers had requested one.

To date, McCormack has provided no formal training. “There is no uniform way to use the iPad,” he says. “Science will use it differently than English; early adopters differently than the fearful. We want to respect everyone for where they are at.”

In May 2010, all remaining faculty members received an iPad. “We encouraged them to play Scrabble, download music, or just play Angry Birds during the summer. Our faculty learn and work differently, just like kids.”

In September, the school began its rollout and gave two grades of students their own iPads. A small group began meeting after school to share best practices. By December, the group doubled in size to 30 people, all talking about how to optimize iPads and differentiate instruction.