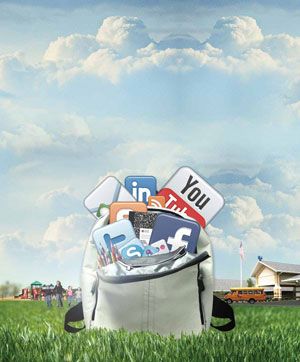 “This said, you have to understand that social media is much more than just Facebook and Twitter,” says Dean Shareski, a former Digital Learning Consultant with the Prairie South School Division in Moose Jaw, Saskatchewan. He was also the keynote speaker at Tech & Learning’s Tech Forum Texas in November, 2011. “In reality, social media is any kind of media where there is the opportunity for people to interact online,” Shareski notes. “That’s how all-encompassing it truly is.”

“Anything that lets people interact online is effectively social,” agrees David Jakes. He is a Coordinator of Instructional Technology in Glenbrook South, Illinois, and a recent speaker at T&L’s Tech Forum Chicago. “Blogs qualify, as do chat rooms, interactive sites, and even bookmarks.”

Carolyn Foote is a tech-centric librarian at Westlake High School in Austin, Texas (and another recent Tech Forum Texas speaker). She writes about her school’s iPad 1:1 rollout and its impact on library services on her blog at www.futura.edublogs.org. Foote has seen firsthand how much students can learn using social media, and how many options they have for doing so.

“When students write something and post it on a blog for the world to comment on—and people do—that is social media in action,” Foote says. “Students can also use the Web to collaborate on projects with peers in other schools, both locally and around the world. They can create videos that they post on YouTube, or discuss the ongoing lesson with other students in the same class using a chat screen. And make no mistake: Using chat in this way can really engage students more actively in the lesson than just having them sit there while someone talks at them.”

Posting materials online also helps students become accustomed to dealing with the outside world. “It means something to a teenager when a complete stranger takes the time to read their work online and comment on it,” Shareski says. “It proves to them that there is a world out there where they can have an impact, and that what they do can elicit a positive response.”

Students at Westlake High School in Austin incorporate social media into their lessons.Moreover, building up an online resume of material is useful for students when it comes time to apply to college. “In this sense, social media can be a very positive way for young people to make ‘digital footprints,’ which is a big part of what living in the 21st century is about,” David Jakes comments. “This is why teachers need to find ways to use social media in the classroom, to help their students along in this process.”

What about kids abusing Web access in order to play on Facebook, or perhaps surf to unsavory sites? “There have always been kids who read what they’re supposed to in class, and others who whide a motorcycle magazine in their textbook and read that instead,” Foote replies. “I’m not trivializing this problem, but I am pointing out that it existed long before social media arrived. In either instance, it is up to teachers to look out for these issues and deal with them—and to get more training to deal with them more effectively, if need be.”

This said, neither Foote, Jakes, nor Shareski are advocating a “wide open” approach to social media at school. All three of them see a need for some level of control by teachers and school over Web access.

A case in point: “We don’t want the kids to tie up our network accessing Facebook,” says Jakes. “We also have the expectation that our teachers keep an eye on where students are surfing to— and we can check their pathway in a number of ways—but otherwise we have a fairly open access policy. However, we do advise against teachers ‘friending’ students on Facebook. While this is just a recommendation, we do not feel this is a wise idea, because we do not want to encourage a practice where some students may or may not be friended. What message does that send?”

As for the dangers of students interacting with strangers over the Web? “There is a risk, but we have to keep this in context,” says Shareski. “Most of the time strangers who comment on students’ work have no ill intent in mind. Those who do, we can watch out for. But we shouldn’t cut our students off from the positive feedback they can get out of fear.”

In truth, the appropriate use of social media in schools goes much further than creating ‘rules of where you can surf.’ It comes down to educators grasping social media as a new form of learning—both for researching and collaborating more effectively.

To do this, educators themselves have to become personally familiar with social media, just as they had to personally embrace computers not so long ago. The reason is that social media is a paradigm shift, just as the move to computer-based learning was a paradigm shift. And just as computers can no longer be dismissed as toys for playing shoot- ‘em-up games, social media can no longer be marginalized as just wasting time on Facebook and Twitter. Social media represents a whole new way of doing things not just for educators and their students, but society as a whole.

It is for this fundamental reason that Foote, Jakes and Shareski advocate schools embracing social media. Like those who understood rock’n roll as a rebellion against the conformist 1950s, these educators know that social media is truly the wave of the future. Schools can either choose to get on top of the wave and surf with it, or be washed away as it crashes through the sea of society.

When I first started using social media several years ago, I was skeptical about how valuable it would be for me as an educator. But the more I learned about it, the more I wanted others to see that it really can be a valuable resource that saves time. In order to keep things simple, I have created three following “three C’s” that guide me in social media participation:

Connect: You need to get connected to the right social media tool that works for you. Do the research, sign-up, or “lurk” a bit by spending some time “playing” with them. Start a free blog and invite people to join. Of course, Twitter, Facebook, Ning, Google + and Posterous are all great places to start, too.

Collaborate: So many people connect to social media, but do not leverage the "social" aspect it offers. Let's say you join Twitter and just consume the information that is being shared. If you fail to contribute back to the community of people you are connected to, you will be missing out on some really valuable connections. By contributing you will also gain more followers that will in turn allow you to increase your connections and collect valuable resources.

Curate: Now you have all of this information. What do you do with it? There are tools that allow you to sort things out and remain organized. By using free social media “dashboards” like Tweetdeck or HootSuite, you will be able to include multiple social media sites in one location that will allow you to both consume, contribute, and curate information. One of my favorite tools for digital curation is the social bookmarking site Diigo. You can link this service to your Twitter account, and the toolbar is great for quick bookmarking and note taking.

Frank Pileiro is a Technology Coordinator in Southern New Jersey. Read his blog at techlearning.com and follow him on Twitter @MrP_LPS.