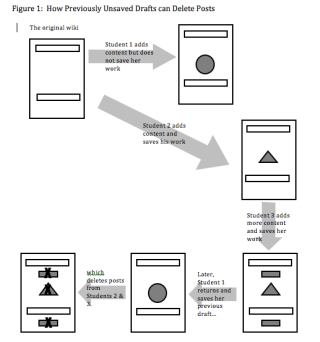 Of the Web 2.0 applications that have emerged over the last few years, I find wikis to be one of the most promising tools for education. First, wikis are easy to use. Students may need a short tutorial to start using a wiki but even a novice can become quite skilled in adding content in a relatively short amount of time. Secondly, wikis offer many administrative tools that allow teachers to track student posts and monitor the history of a class wiki. Lastly, wikis promote student collaboration and communication. The wiki process succeeds through the basic premise that the whole is bigger than the sum of its parts. Recently, however, I encountered a serious wiki problem in one of my classes. Although the incident began as an accusation of academic misconduct, it ended up teaching me some important lessons about using new technologies with students. While this story takes place in a collegiate environment, it can serve as a warning to any teacher who plans to use technology with students.

I teach instructional technology to preservice teachers at a state university in Pennsylvania. To allow my students to experience the educational benefits of wikis firsthand, I created a class wiki where students would embed videos from YouTube and TeacherTube. To connect the wiki project to curricular content, I developed the assignment around assistive technology and asked students to find and post examples of K-12 students with special needs using assistive devices. I also asked my students to write short descriptions of the devices demonstrated in the videos they posted and comment on the submissions from other students.

Midway through the assignment, I noticed that something odd had happened. Although I received emails from the wiki showing that students had posted content, I could not find the students’ work on the site. I searched frantically through the wiki history thinking that the embedded video had possibly overextended the capabilities of the site. After a few minutes, however, I determined the solution to the problem. On a single editing attempt, a student had deleted many of the posts from her classmates. Luckily, wikis offer a post-by-post, date stamped history where users can see every change that was made during the life of a page. As can be seen from the screen shot from a portion of the wiki, the history showed red areas where student posts had been deleted. As I studied the history, the deleted posts were often not contiguous. Deletions occurred sporadically down the page and always removed entire posts from students. Out of the 22 students in the class, the posts from thirteen students had been deleted. As I studied the history, it appeared clear. The wiki had been vandalized and I had caught the student in the act of deliberately sabotaging the work of other students.

After restoring the deleted student posts, I met with the student I had identified as being responsible for deleting the wiki content and discussed possible penalties. I explained that the project was a graded assignment. Because she had not copied the work of other students, the infraction technically could not be constituted as cheating. I also explained that deleting posts from others students could have affected their grades. I compared the infraction to a hypothetical situation where a student might take a stack of student papers from a teacher’s desk so that it would appear that other students had not completed the assignment. While this task would be almost unimaginable in a face-to-face environment, it can easily happen with online collaborative tools. By deleting the posts from her classmates, I would not have been able to fairly grade their work. From my point of view, the infraction was a serious academic offense that could warrant a failing grade in the course or even more major sanctions.

The accused student was shocked and remorseful. “Why would I do this?” she cried. “Why would I delete the work from my classmates?” As I sat listening to the students’ tearful pleas of innocence, I wondered if I had missed something. Even though the history clearly showed the student was responsible for the deletions, she appeared credible. I decided to make a more careful examination of the wiki history.

I searched through the entire history of the wiki again. I looked at each of the 120 student posts to see if this odd behavior had happened at some other time. It had not. At no point in the history of the wiki had deletions of other students’ posts occurred. I did notice, however, that when several students were posting at the same time, they overwrote each other’s work. Although this happened twice during the wiki’s history, I did not think this was relevant to the vandalism incident. The history showed that the accused student was the only person working on the site at the time. Also, the sections that were deleted had been posted over the span of a week. After searching the history, I became even more confident in the evidence showing that the student had vandalized the site and maliciously deleted work from her peers.

The overwriting issue, however, made me think about how the wiki functioned. The wiki allows for multiple editors. If students are working on the site at the same time, they can unknowingly overwrite each other’s additions. Thinking about this functionality, I remembered that the wiki I was using (wikispaces.com) also retains drafts of posts. For example, if a student were working on a submission and exited without saving or canceling her work, she could return to this draft the next time she tried to edit the page. Could this odd saving process have created the deletions that I mistook as vandalism and academic misconduct? I returned to the wiki history for more information.

Looking at the history, I saw that the accused student had made several edits on the wiki on March 8th. Some of the edits differed by a few minutes (10:23 PM, 10:28 PM, 10:31 PM, etc), which I thought was odd. Possibly, I thought, she was working on a submission and was revising it over and over again. Could she have exited her last draft without saving or cancelling her work? Working from the assumption that she had, I saw that the deletions occurred the next time she posted, which occurred almost a week later on March 14th. If she had returned to her earlier draft from March 8th, she would have accidentally overwritten all of the student posts in that time period. The only way to show this might have occurred was to look at when the deleted sections had originally been posted. Looking again at the history, all of the deleted posts were submitted between March 8th and March 15th. Possibly, the sporadic deletions were not the result of malicious vandalism, but due to the student working from an earlier unsaved draft that eventually overwrote posts from her classmates. Figure 1 demonstrates how overwriting could occur.

To satisfy any reservations I had, I attempted to reproduce the incident. With the wiki still functioning properly and students still posting content, I began editing the page and exited without saving or cancelling my work. I waited several days and returned to edit the page. A dialogue box appeared that asked if I wanted to work from my previously unsaved draft. I selected “Yes.” I then made some minor changes and hit “Save.” Another dialogue box appeared that announced if I wanted to save my work, I would be overwriting posts from a list of people. If I selected “Yes” to this statement, those posts would be deleted regardless of where they occurred in the page. In my mind, this experiment proved what had actually happened with the wiki, but also demonstrated that the student was not completely innocent. Like many students, she probably chose to simply click “Yes” without really knowing to what she was agreeing. Because of this, I gave her a diminished grade for the project but chose not to pursue any additional sanctions.

Despite this incident, I still think a wiki can be a powerful teaching tool and I plan to use wikis with my students in the future. Although this incident was stressful at the time, I choose to remember this event as a learning opportunity, one that communicates important lessons for me and the preservice teachers with whom I work. This incident demonstrates that our students need to fully understand how a tool functions before we can expect them to use it properly. Reflecting on how I introduced the wiki project, I should have better described how wikis operate and explained the possibility of overwriting other posts. I should have also highlighted the need to save or cancel any work before exiting. Having this discussion with my students at the start of the activity might have avoided the accidental overwriting completely. In the future, I will share this story with my students to demonstrate the unexpected events that can occur with new technology. As future teachers using technology with their students, they need to be aware of the possibility of these inadvertent actions and approach them thoughtfully.

Dr. Oliver Dreon is an assistant professor at Millersville University of Pennsylvania where he teaches instructional technology and science methods courses. Prior to coming to Millersville, Dr. Dreon taught science for fifteen years in the public schools and was a 2001 Christa McAuliffe Fellow (PA). He obtained his BS in Physics and his MA in Teaching from the University of Pittsburgh. Dr. Dreon recently completed a PhD in Curriculum and Instruction through Penn State University. His research interests include teacher development and professional teacher identity.