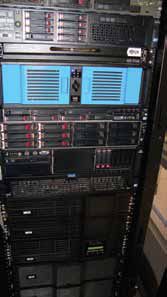 In talking with network managers at schools across the country, one thing is clear: Virtualized networks are the way to go. Here are the biggest benefits.

Virtual networks let you save time

Network admins save time with virtualized servers in Minooka, IL. “I can have a brand new server up and running in about 20 minutes. Setting up a physical server used to take several hours or even a day,” says Jason Willis, network manager at Minooka (IL) Community Consolidated School District 201.

Virtual networks are easy to manage

“I can do all of my updating, change CPUs, reboot servers, or whatever else I need from my house, from my iPad, wherever. Recently I changed CPUs while I was at a conference,” says Willis. “Before, we didn’t do updates unless there was a problem.”

“Load balancing is automatic, as VMware moves virtual servers to less busy hardware using VMware’s DRS. If a physical server goes down, VMware will recognize that the physical server has gone down and bring the virtual server back up on different hardware,” says Steve Bradley, network administrator at Rocklin (CA) Unified School District.

“Each box has an internal network so we don’t need as big a backbone. Communication happens inside of the server, so it’s faster and easier overall,” says Allen Clasen, director of information systems at Oswego (IL) Community Unit School District 308.

Clasen went from 60 to 3 standalone servers in each of his two data centers.

A closeup of an HP Blade at Rocklin USD.“You can do more with less people,” says Bradley. “I lost two technicians in the last two years, but we can still manage everything.”

“Most physical servers use only a fraction of what they have available; with virtualization, we use as much as we can,” says Clasen.

“We want to add more technology and capability, but we can’t afford to hire more staff. A virtualized network lets our current amount of staffers do more,” says Smith.

“To me, virtualization is a no-brainer,” says Willis. “That’s where technology is going. No more physical boxes and individual servers doing individual things.”

“There’s an increased performance for the end user,” says Clasen. “The physical servers are higher end so there’s not as much delay as before.”

Servers nearly manage themselves at Mooresville Graded School District.“There’s less hardware overall, so that’s less hardware to break, to fail, or for us to have to deal with,” says Smith.