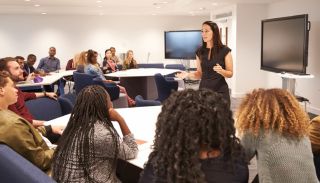 1 Immersive Media and Child Development: Synthesis of a Cross-Sectoral Meeting on Virtual, Augmented, and Mixed Reality and Young Children

New research from the Joan Cooney Center at Sesame Workshop addresses the future of childhood and immersive media. Sixty leading experts came together to think critically about the future of childhood and the importance of immersive media in education, play, and everyday life. The visions of the future the group shared embraced the power of these media to reduce the digital divide, create more equitable environments, and empower young children. Immersive media is defined to specifically refer to the content, software, and hardware associated with augmented reality (AR), virtual reality (VR), mixed reality (MR), and cross reality (XR). As a community of designers, developers, researchers, doctors, educators, policymakers, and practitioners, they started conversations about shaping a future for children that is aspirational but achievable. Still, the considerations regarding design, research, policy, advocacy, and funding that emerged at the meeting merely introduce the beginning of the work that must ensue. Now is the time to ensure that when children engage with immersive media in their near and distant future, individually and collectively, their experiences will be positive, productive, and safe.

2 K–12 Professional Development Is Critical, So Make It Count

Personalization, coaching, and flexibility help teachers get the most out of coaching on educational technology. With one estimate indicating as many as 77% of jobs will require some degree of technological skill by 2020, it’s critical that students are comfortable using technology. Yet only 10% of educators, who are responsible for preparing students for that future workforce, feel confident teaching higher-level tech skills, according to a 2018 PwC survey. Of the more than 2,000 K–12 educators who participated in the PwC survey, 79% said they want more training focused on helping them effectively teach technology-related subjects. Other educators desire more hands-on instruction: 33% said a lack of PD had hindered their ability to use technology in the classroom, according to a 2018 Houghton Mifflin Harcourt report. After a pilot program in 2017–2018, sponsored by Digital Promise, 60% of the teachers who had been paired with instructional coaches reported progress in their ability to use technology in their teaching practice. Eighty-nine percent said that the coaching improved their ability to choose the most effective tech tools, and 77% said they felt better able to communicate with students in a way that resonated.

The K–12 advocacy group has made two new tools available through its Interoperability Standards initiative to eliminate confusion about how much money and effort a district’s IT office can expect to incur for a given interoperability project. One tool is an online calculator, developed with help from Double Line, an education data management company, and the other tool is a downloadable spreadsheet template that helps users calculate project costs and staffing hours. Success with interoperability has seen a steady rise in K–12 school districts in recent years. CoSN’s 2019 K–12 IT Leadership Survey Report shows that the number of districts reporting either partial or completed interoperability projects rose to 69%, compared to 62% the previous year. “In many districts it has proved an insurmountable challenge because they don’t have a lot of technical expertise typically,” says Keith Kruger, CoSN’s CEO. “The real cost of lack of interoperability is often hidden.” Krueger says that, armed with this information and the data that districts can gather through CoSN’s new calculators, administrators will be able to make stronger business cases as they advocate for their technology needs.

In a recent issue of ASCD Express, editors shared an article by Cathy A. Toll on her experience coaching school leaders. She maintains that new school leaders typically start out full of enthusiasm, but at some point in the first year they often find themselves disappointed, exhausted, and full of self-doubt. Reflecting on the following perspectives can make the difference in the success of school leaders, old and new.

■ Teachers are well-intentioned, hard-working people who care about students. The leader’s job is to help teachers figure out what is getting in their way and keeping them from success.
■ It’s not about information. By focusing on the teacher’s care for their students, leaders start with what drives most teachers to pay attention and to open up to the ideas of others.
■ Everyone has their own vision of success. Savvy leaders pay close attention to what’s happening in the school and then guide the staff in developing a vision that reflects the priorities and passions of those who work and learn there.
■ Resistance makes perfect sense to the person who’s resisting. Effective leaders tune in so they can better understand what teachers are really thinking. This process has the potential to create a productive dialogue, enabling teachers and leaders to approach problem solving and planning together.
■ Every situation is best approached by listening first. Solutions are nearly always better when leaders have help in choosing a path, and those who were involved in developing a plan are more likely to be enthusiastic about implementing it.