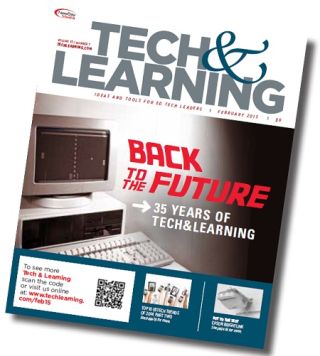 The best of reader online responses in print

What a wonderful trip back these articles provided! As an undergraduate in the mid-70’s, I learned to program with PLI—handing punch cards through a window and praying to get some type of results. Then in 1980, I stepped into my new classroom which had one PET Commondore 4K and had no idea how to use it. Luckily, the students were excellent teachers and I was hooked much like David Warlick! Within two years, our high school had 40 Commandore 64K machines and we were teaching BASIC. Two years later, I was an assistant professor of computer science and I have not stopped learning about these machines and technology in general since. What they have done for education cannot be stated in so small a space!
MARY-ALICE MURASKI

Brings back many memories. In the mid-’70s, when I was a math teacher in the Bronx, the PTA was donating some money to the school. I suggested some of it be used to purchase one of these “microcomputers” I had heard about. Of course, because it was my suggestion, I was tasked with researching, selecting, buying, and learning it. We bought an Ohio Scientific C1P ($100 less than a TRS-80, money that could be used for a tape drive, tapes, etc.) In order to get anything done with it, we needed to write BASIC programs. A bunch of my students were interested in this and helped. Of course, the private sector then began selling programs—computer-assisted instruction “drill and practice,” for the most part, with some tutorials and elementary simulations coming a bit later. Then Logo and “tool software” (word processing, etc.) came next. By then we had Apple II machines—the big time.
BRANZBURG

I have been working in the computer field ever since leaving the US Army in 1973 but didn’t own one until 1990 when I traded a ‘75 Mustang for a two floppy drive TRS-80. I was thrilled and loved playing with it eventually adding a 10 megabyte hard drive and installing DOS! I think it was version 3.0. It was a lot of fun back then since you were working more directly with the operating system. I also really enjoyed using the earlier version of Norton. Remember when defraging was so important?
PAUL MORSE

TRANSITIONING TO THE COMMON CORE

One thing that you did not consider is the compatibility between Office 365 Pro Plus for students and teachers (which is free) and Google apps for education. My school runs with Office 365 and it does not run very well on Google Chrome. I have some Mac users that have to use Safari to run Office 365 because Chrome just quits. To say that Chromebooks are not susceptible to viruses is just false. All computers can and do get viruses, even Chromebooks and yes, Macs. Finally, if you do purchase Chromebooks, you may be able to buy more, but you will have to replace them more frequently than a better built system. With any purchases, do your research and find what is best for your environment and what would cause the least amount of headache. Sometimes, the higher cost is worth it in the end.
JOHN CHRISTOPHER

The invention of the wheel was not a stopping point or a finished product. Just providing a grade or a level on a rubric for an educational activity should also not be a stopped point or viewed as a finished product. Learning is a continuous process. It is too bad that usually in education a grade is associated with, “I’m done. So, how did I do?” Instead, an evaluation in education should be, “This is what you have completed so far. Now, how can it be improved?”
MEL JANOUSEK

I can see how putting all this technology—Office 2013, Google Apps, and Adobe Production—in front of the kids at an earlier age can benefit them later in life. But let’s get back to basics. In order for them to use all these tools, they need to know how to use a computer and how to type. I think taking a step back and making sure all kids (not just the more affluent ones with laptops and iPads at home) know how to type is very important.
EMILY MANNING