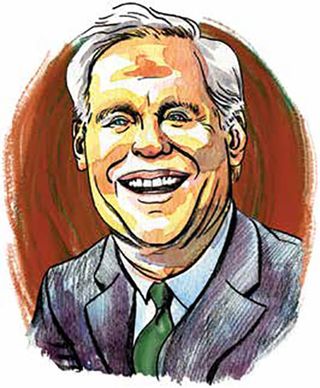 As part of Tech&Learning’s 35th anniversary celebration, we look back at those people who have made today’s advancements possible. Some of them will be obvious. Others we think will surprise you. All of them deserve recognition for creating this wonderful space we call education technology.

The charismatic and sometimes controversial Richard Atkinson makes our list for many reasons, which include his monumental accomplishments as president and regent of the University of California system, where he creatively managed the nation’s largest (and most expensive) public university system. In his tenure as president the outspoken professor recommended that the SATs be eliminated from the Golden State’s admission process, stating that the test had “ill-defined notions of aptitude,” and that students should be tested against what they had actually achieved. He sparked a debate that led to sweeping changes to the test. While at Stanford, Atkinson worked with Suppes on the IBM 1500 CAI system and he finished his career as chancellor of the University of San Diego. He remains a constant champion of digitized learning, believing that technology can bring education to students in all corners of the world.

Patrick Suppes may have singlehandedly made philosophy a credible major through his groundbreaking innovations in educational technology and experiments in computer-aided learning. An early tech and learning adopter, he not only encouraged software developers to focus their efforts towards education but also helped build the IBM 1500 Computer Assisted Instruction system in the 1960s while at Stanford University. His radical efforts, which earned him a sizeable grant from the U.S. Department of Education, are the cornerstones of what we know as distance learning today. Born in 1922, Suppes completed his lifelong career as the Lucie Stern Professor of Philosophy Emeritus at Stanford University and ran the gifted students program there until 2010.

Her collaborator, Charles Babbage, nicknamed her the “enchantress of numbers.” Ada Lovelace, who just happens to be the only legitimate child of poet Lord Byron, was born in 1815. Her mother saw in her an early aptitude for numbers and figures and insisted that her tutor concentrate her studies on mathematics and science. While other girls of the aristocracy worried about court and cotillions, Lovelace would labor over Babbage’s “Analytical Engine,” which would feature her method for calculating a sequence of Bernoulli numbers—the first computer program and the first algorithm.

Her influence is still recognized today in many ways. The Department of Defense named its computer language “Ada” after Lovelace. The Ada Lovelace Initiative, a non-profit organization, encourages women’s participation in the free culture movement, open source technology and open culture. Lastly, “Ada Lovelace Day” is an annual event celebrated in mid-October with the goal to raise the profile of women in science, technology, engineering and math (STEM).

It’s hard to find someone of import not mentioned on Wikipedia, but Anna Verona Dorris unfortunately makes the list. It’s time to rectify that situation. Her work during the Visual Instruction Movement from 1918-1928 paved the way for using alternative methods in the classroom beyond basic rote rituals. The one comprehensive biography comes from Wendell G. Johnson, in the journal Techtrends, from July/August 2008: “Not only was she a pioneering woman in the field of visual instruction, she was a pioneer in a field dominated by men.” In 1923, her seminal book, Visual Instruction: Course of Study for the Elementary Schools, Including the Kindergarten and the First Six Grades, introduced the then radical idea of using motion pictures, prints and photographs, maps, and globes in the classroom. She even introduced the concept of “excursions,” now known as field trips, into everyday curriculum. We can only wonder what Dorris would do with an Internet-enabled tablet in her classroom today!

“Genius is one percent inspiration and ninety-nine percent perspiration,” said a very humble Thomas Edison, inventor of the phonograph, the electric light system, and motion pictures—to name only a few. What we find unique about Edison in terms of education is his dedication to the spirit of collaboration. The “genius of Menlo Park” is known as the father of R&D; he not only set up the first labs where teams of inventors brainstormed, but he also hosted “midnight lunches” for his employees who were willing to pull late nights in the lab. The STEM curriculum (science, technology, engineering and mathematics) is based on Edison’s principle that the four disciplines should be integrated in order to produce (and thereby invent) technologies that can be used in the real world. Edison is so relevant today that he was even name-checked by President Obama in 2012: We need to get back to that Edison inventive spirit.

Internet pioneer Howard “Ward” Cunningham is known for creating WikiWikiWeb, the first wiki, in 1994, when the Web was still considered wild. The modest developer and programmer famously stated of his creation that the best way to get the right answer on the Internet is not to ask a question; it’s to post the wrong answer. This became known as Cunningham’s law.

“Wiki reversed the review-then-publish practice to become publish-then-review,” Cunningham told T&L. “Although there is some risk to the reader, the cycle time among collaborators increases dramatically.”

Mr. C. is quick to credit Caltech professor Carver Mead for providing early inspiration, showing him that even seemingly complex systems can be understood in an intuitive way and that this understanding can lead to innovation missed by others. Consequently, one could say that the wiki was created through blind trust.

“Amazing Grace” Hopper graduated Phi Beta Kappa from Vassar College in 1928. Two years later she earned her Masters in mathematics from Yale University and by 1934 she had her PhD. In 1931 Hopper began teaching mathematics at Vassar, taking a leave of absence to join the WAVES (Women Accepted for Volunteer Emergency Service). It was during her service to her country that Hopper earned her “amazing” moniker. She was one of the first programmers of the Harvard Mark I, a computer used in the war effort.

Throughout her illustrious career Hopper earned many more nicknames, such as the “queen of code” and the “grandmother of COBOL,” the programming language she designed. She convinced the Department of Defense to create “portable” language systems through her unique teaching and speaking skills. She coined the phrase “debugging” after she removed a moth from a computer riddled with glitches.

The U.S. Navy destroyer USS Hopper was christened in her honor and the Cray XE6 “Hopper” supercomputer at NERSC also bears her name.

Hopper, however, felt that her most important accomplishment, other than building the compiler, was training young people. She was known to keep tabs on her students and protégés. “I keep track of them as they get older and I stir ‘em up at intervals so they don’t forget to take chances,” she once said.

As roommates at Carleton College in Minneapolis, we’re sure that Don Rawitsch, Bill Heinemann, and Paul Dillenberger shared a lot more than a passion for education. We recognize the trio as the student teachers that blazed the Oregon Trail over forty years ago and created the most widely distributed educational game of all time.

Led by Rawitsch, who was then teaching history, the game design started with a series of scribbles and buzzwords (disease, broken limb, snake bite) on note cards that stretched from Independence, Missouri, to the Willamette Valley. While it was extremely low-tech they all agreed it would make a great computer game. Dillenberger and Heinemann knew just enough about coding to get it up and running, and the rest is history.

“How ironic that the very first thing I accomplished with a computer became so memorable,” said Rawitsch. “I believe I still have opportunities ahead to build new [creations] and influence today’s educational application designers.”

Today, over 65 million copies of the game have been sold and it’s still selling.