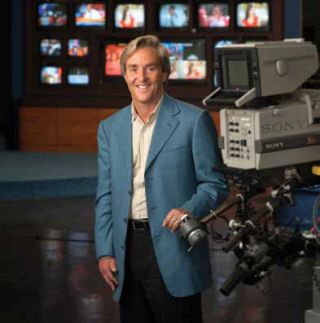 After five years and more than 100 honorees, the editors would like to think that this annual list is now officially “a thing.” Selections are not derived from some fancy algorithm or complicated polling data. These are people who have stuck out in the course of our coverage so far this year. Some are teachers, some are administrators, a few are activists, and there is even a corporate type or two! What they have in common: all are doing extraordinary things.

As a teacher and child advocate, James Steyer has been helping kids his entire adult life. The self-professed Luddite, however, had no idea that he’d one day be at the helm of three powerful platforms: Common Sense Media, Common Sense Education, and Common Sense Kids Action. The former Stanford professor says that the real “aha” moment came when he was a volunteer teacher in East Oakland.

“I was in the class with second and third graders, many of whom had social and emotional issues,” says Steyer. “Some of them were in foster care and really serious poverty. I’d watch them play computer games like, Where in the World is Carmen San Diego, and, Oregon Trail, and I saw how much they loved it and how they were learning. Through these games they were learning math and geography.”

Realizing how ubiquitous technology is, and how powerful its influence can be for all of us, especially children, Steyer wanted to help guide educators, parents, and students to the best and safest resources available. “A lot of this is just common sense at the end of the day,” says Steyer. “It’s a healthy balance of moderation and good judgment.”

When tech entrepreneur and investor Hadi Partovi saw that a significant percentage of schoolchildren were not learning computer science, he took matters into his own hands and founded Code.org, as well as Hour of Code. Partovi launched the Hour of Code in 2013, and a year later President Barack Obama and Vice President Joe Biden invited a group of participants to the White House so they could learn how to code themselves. Today, Code.org has reached every state in the US, 10 million schools, and every single country. The number of students worldwide who are learning to code is now in the hundreds of millions—and counting. “We really think of ourselves as a teacher-powered movement,” says Partovi. “That, by far, has been our biggest success. Teachers are embracing this and making it their own.”

The initial hurdle Partovi faced was convincing teachers that kids could learn computer science. Three years later, Code.org has convinced so many, the group can hardly keep up with the demand. The organization has established partnerships with 90 school districts across the country, from Atlanta to Phoenix and LA. To date, 19 states have changed their graduation policies to include computer science, and 120 school districts offer computer science classes as part of the curriculum. “Since the majority of our students are around the tenth grade and over 48 percent of them are minorities, I think we will start to see the number of Blacks, Hispanics, and females employed in the tech industry increase in about six years,” says Partovi.

Microsoft’s globetrotting Anthony Salcito started working with Microsoft in 1992 and has headed up their education initiatives since 2009. Over the years he’s seen the explosion of Minecraft, OneNote, and Skype as teaching tools, and he’s headed up Worldwide Partners in Learning and Partners for Technology Access, as well as Public and Private Alliances programs. One morning he might wake up in Qatar, and the next he’s speaking at an education symposium in London.

Back on American soil, he sees student dropout rates, and not Apple or Google, as his competition. “I am competing against teachers who are frustrated, overworked, and stressed,” says Salcito. “I’m competing against the school leaders of this country that are not concentrating on the holistic change that needs to take place.”

As a matter of fact, Salcito wishes that tech companies would quit competing with one another and concentrate instead on broader missions. He’s also on a crusade to celebrate progress rather than criticize the lack of it. “The reality is we’ve got a lot of work to do to empower educators and enable a broad holistic change to take place,” he says. “There are plenty of companies and technologies competing with one another, but our work is to make sure that we are affecting change.”

Kimberly Bryant has worked as a biotechnical engineer for over 20 years. She recalls that when she was in college there were only two or three students of color in the entire program. Those numbers haven’t changed, and today black women make up only 3 percent of the tech workforce. In 2011, in an effort to redress this imbalance, Bryant created Black Girls CODE.

The organization is open to all girls. Eight girls attended the first event, which was held in San Francisco. Black Girls CODE now has chapters in Atlanta, Chicago, Detroit, Memphis, New York, Raleigh-Durham, the San Francisco Bay area, Washington DC, and Johannesburg, South Africa. Through programs and events, girls learn to code, build Web sites and robotics, and create mobile apps. Bryant says that girls are learning how to build the stuff they’re using instead of simply staring at screens all day.

Black Girls CODE receives funding from Fortune 500 companies, and there’s a proposed $2 billion commitment from the White House, but Bryant says it’s not enough. “We’re fighting really systemic racism that’s been built into the fabric of not just these companies, but our nation in general,” says Bryant. “I think even more predominant is this notion of implicit bias that is one of the leading factors in prohibiting the tech industry from becoming more diverse.”

About a year ago, MIT’s Office of Digital Learning began a partnership with the Woodrow Wilson National Fellowship Foundation to help create a new competency-based graduate school of education. At the helm are MIT Professor Eric Klopfer and Dr. Vijay Kumar, Associate Dean of Digital Learning, who are helping to incubate and support this new program, which will serve as a sort of R&D center. WW Academy follows a new paradigm for preparing math and science teachers that focuses on field practicum experience, hybrid learning, and a series of challenges based on requisite teacher competencies.

“Our work in my lab has focused on a series of games and simulations that can help prepare teacher candidates for competency-based challenges and the corresponding challenges of the classroom,” says Klopfer. “We’re also creating a simulation game that we call Eliciting Learner Knowledge (ELK), which is a role-playing game in which teacher candidates play the role of teacher or student studying a particular topic.”

The goal is to help teachers get inside their students’ heads. It also helps build empathy and a perspective on how students might answer questions. “As we’ve moved the game to an online platform, we also have the advantage of a record of activity that can be a central artifact for debriefing the activity,” says Klopfer.

As superintendent of the Coachella Valley (CA) Unified School District, Dr. Darryl Adams put an iPad in the hands of every student but found that most of them had no Internet access to use them. Coachella Valley is among the poorest districts in the nation, and very few families have computers, let alone Internet connection. How could students brave the digital divide with only half the resources?

“A lot of these kids travel an hour each way to school, so I thought, let’s wire the buses,” says Adams. “And we took it one step further by finding the areas with the most need and we leave the buses in those neighborhoods overnight.”

The district now has eight buses outfitted with routers and solar panels on the roofs. In addition, two salvaged vehicles wired for connectivity sit parked in the district’s poorest areas. Adams, who was recently selected by the White House and the US Department of Education as one of the Top 100 Innovative Superintendents in America, plans to wire every single bus in the district. He was also name-checked by President Obama for ensuring that students have equitable access to technology and the Internet.

“Our graduation rates are now up by close to 9 percent, and we hope to see that number grow even more,” says Adams.

Colin Hegarty’s lightbulb moment came in 2012, when one of his math students at the Preston Manor School in the UK announced he was going abroad to be with his terminally ill father and told Hegarty he was worried about keeping up with his studies. Hegarty put the entire course online for him to access while he was away. “I thought there was a real opportunity to have an influence outside my own classroom,” says Hegarty.

Hegarty, a former financier, went on to win a £15,000 prize from Let Teachers SHINE to build his Web site (mathswebsite.com/). He has produced 1,500 videos that have been used in secondary schools across the UK and have been viewed by countless students all over the world. Hegarty won the 2015 UK National Teacher of the Year award and was nominated for the Varkey Foundation’s Global Teacher prize, finishing in the top ten. He embraces and utilizes the concept of a flipped classroom and simply does not accept that some kids just don’t get math. “I believe that all students should have free access to the best quality mathematics teaching,” Hegarty says, “so they can learn this beautiful subject that will be at the center of innovations to help our planet.”