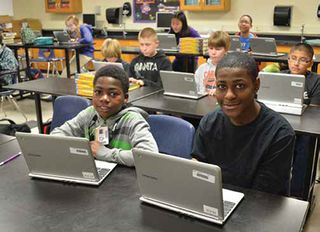 The districts in this story have practiced what we at Tech & Learning preach: You can’t start your 1:1 program with the device!

First, you have to come up with a framework and design a teaching and learning plan that will help you meet your objectives. As part of the process you should also update your infrastructure, devise a professional development plan, and determine how you’ll let your community know about your new direction. Only after all of that is accomplished it will be time to discuss the device or devices that will help your teachers transform their practice and help your students achieve their best.

The following four districts did this preparation and chose Chromebooks. Their choice is not surprising since, according to Simba Information’s Complete K-12 Report 2015, there are currently 1.2 million Chromebooks in our schools. What’s helpful is to learn how they selected the particular Chromebooks that helped them reach their goals.

Thanks to a digital learning conversion at CMS Schools, student engagement is higher than ever.
“We don’t call our program a 1:1; it’s a digital learning conversion,” says Valerie Truesdale, chief technology officer of Charlotte-Mecklenburg (NC) Schools (CMS). CMS has taken advantage of the Internet and mobile technology to personalize and individualize learning. CMS teachers have practiced differentiated instruction for awhile, but in 2012 the district started talking about how to maximize student achievement. They formed task forces, began planning for a 21st-century learning environment, and made sure every classroom was wireless and had projection devices. Teachers in personalized learning pilot schools are learning about the SAMR Model (Substitution Augmentation Modification Redefinition) and the TPACK Framework (Technological Pedagogical Content Knowledge).

In 2012, the district purchased Discovery Education’s Techbooks to supplement the state’s middle-school science and social studies textbooks that had not been updated for years. CMS also began to provide middle schools with a few carts of HP Samsung Chromebooks to support science and social studies. Because the state is moving toward online testing, the devices they selected had to have built-in keyboards. While they chose Chromebooks primarily based on price, Chromebooks also made sense because the devices boot up quickly. The district researched what students needed to be college-ready and as a result, they decided to build knowledge and use of Google Apps for Education, specifically Google Docs.

Samsung Chromebooks, which are spread all over Desert Sands USD, pave the way for collaboration.
Based on a positive experience with Chromebooks in the middle schools, CMS started figuring out how to add devices to more schools. Price was critical, but the district also asked vendors what they could bring to the table to help make the digital learning conversion successful. “HP proposed Chromebooks and [offered] a team of researchers to study our conversion. A $220 price point was the primary factor in selection, but having the research study has made a big difference in our experience with HP,” says Truesdale.

Today, CMS has 32,000 Chromebooks, providing every middle-school student with access, and the HPs are working out really well. “It’s amazing how few breaks we’ve had,” Truesdale says. “They are very lightweight and are ready right out of the box. Our technicians are in awe of how ready they are.”

Desert Sands (CA) Unified School District (USD) started researching 1:1 initiatives about four years ago. They visited a neighboring district with a 1:1 tablet program and learned from the students that the screens were too small for reading texts and that they would have preferred a device with a keyboard. “Our takeaway? Tablets are not the solution, especially for high schoolers,” says Kirsten Wright, technology teacher on special assignment at Desert Sands USD. At the time, Chromebooks were just being released. Desert Sands needed something Web-based, cost effective, and scalable that students could use for testing. The district liked that Chromebooks need no software installed, update themselves, and are easy to manage through the Google Admin console. “The whole package was a win,” says Wright.

They tested two different kinds of Chromebooks and chose the Samsung. “It was more durable and had a faster processor. We thought it would hold up better over time.” In 2012, Desert Sands rolled out 100 Samsung Chromebooks in several pilot classrooms. The teachers were thrilled, and when the district received money from a foundation and invited teachers to apply for grants to go 1:1, nearly 300 applied. “We had successful 1:1 pockets around the district, parents were asking for more, and teachers continued to talk it up. That’s when principals started using funds to buy them.”

Acer Chromebooks were the obvious choice for William S. Hart Union, a Google Apps for Education district.
Today, Desert Sands has 27,701 Chromebooks for 29,000 students. Four cloud support technicians support the devices and have easily repaired the handful of screens that have cracked. Other than that, no repairs have been needed. “It’s smooth sailing overall,” says Wright. “Even the original 100 from 2012 are still working like brand new.”

TOUCH SCREENS FOR EVERYONE

In 2011, a forward-thinking director of social programs at William S. Hart (CA) Union High School District received a grant for a Web-based product called MY Access to help students improve writing skills. There weren’t enough computers in the junior high and high school labs, so the director started evaluating Chromebooks and netbooks. “We liked the concept of Chromebooks from a management standpoint since we would be adding 2,300 devices,” says Jon Carrino, director of technology services. “We also liked that they required only Internet access.” At the time, however, they decided to go with netbooks.

A couple of years later, after buying more netbooks, the district knew it had to develop a long-term plan. “Districts all over were going 1:1, and we realized we needed to be doing that as well,” Carrino says. His teachers were finding Web resources and going far with the netbooks, but Carrino knew that the teachers could go even further.

In the summer of 2013, they decided that Google Apps for Education would be their platform and they started migrating email and calendars. Some of the netbooks were three years old, no longer holding their charge, and it was time for a device refresh. “To me, Chromebooks were the obvious choice because of the tight integration with Google Apps,” says Carrino. He looked at other options but needed to make sure he had enough money—not just for the devices but also for professional development, infrastructure, and refreshing. “Cost was an issue, as well as ease of management, but what really tipped the scales was that Chromebook resources are all Web based.”

The district evaluated four different models, but when Carrino found Acer’s touch-screen Chromebook he loved that it combined the “touch” of a tablet with keyboard capabilities. He spoke with a district already using them and got positive feedback. Today they have 4,700 Acer Chromebooks. When the budget allows, they plan to add another 3,600 devices. “I know we made the right decision,” says Carrino.

Glenbrook High School District 225 students display anywhere/anytime learning with their Lenovo Chromebooks.
Glenbrook (IL) High School District 225 started its 1:1 program in 2010 by determining whether 1:1 was the right goal. “1:1 was a direction that would allow us to continue our focus on student engagement, critical thinking, and collaboration,” says Ryan Bretag, director of instructional technology. Once that decision was made, they wanted to figure out which operating system and devices would allow teachers to be so in the moment of teaching and learning that the technology was an afterthought. “Chromebooks are the fastest and most reliable, a transparent part of the classroom, and best seen with the Chrome OS,” says Bretag. “Within eight to ten seconds it’s all about teaching and learning.”

When Glenbrook decided on Chromebooks, there were limited options. They were extremely concerned about durability, and Lenovo stood out. “We were willing to spend $10 to $15 more a year per device to get durability, and it was worth it. We have nearly 3,000 Lenovos and have had a .3 percent failure rate.” The building techs are focused on network issues and large-scale issues with greater impact, and teachers never have to deal with tech support.

Another reason Glenbrook liked the Lenovo 11e and 11e YOGA Chromebooks is that they let students choose to use them as tablets or laptops. “Students have Android apps on their Chromebooks so they can accomplish all you see on the tablets without losing the power of the Chrome OS. It’s the best of both worlds,” Bretag says.

After only two days of using Chromebooks, teachers told Bretag that conversations had already evolved from “What should the classroom look like?” to “What can our students do?” Technology facilitators were surprised that no one was talking about tech hurdles.

Even though the device is only one piece of a 1:1 program, Bretag says it’s important to take the time to make the best choice. “We would not be where we are today without selecting the right device, and I can’t imagine our 1:1 experience being as successful as it is if we had gone in a different direction.”

In addition to HP, Samsung, Acer, and Lenovo, districts can also get Chromebooks from Dell, Toshiba, and Asus. Check out these Web sites for more details.

■ The ASUS Chromebook c300 is ultra-portable and features a spacious touchpad and up to 10 hours of battery life.
http://www.asus.com/us/Notebooks_Ultrabooks/ASUS_Chromebook_C300/

■ Described as “school tough,” the Dell Chromebook 11 has a rubberized LCD, is extremely durable, and weighs less than three pounds.
http://www.dell.com/us/business/p/chromebook-11-3120/pd

■ Neverware’s CloudReady operating system overwrites Windows or Mac OSX and replaces it with a Googlecentric environment, resulting in a Chromebook user experience for a district’s existing hardware.