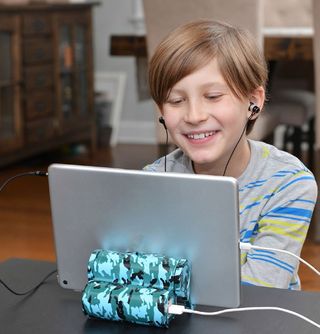 The foldable universal tablet and smartphone stand features a USB power bank with a 2,600 mAh battery, charging cable and earbuds, all of which can be stored within the device. Suggested retail is $19.99, with multiple patterns available.

Building off the company’s popular Fingerlings line of interactive connected toys, the new narwhals and foxes can respond to noise, motion and touch. The narwhals even have a “mood horn” that illuminates in different colors in response to interaction. They’ll be available this quarter for a $14.99 suggested retail each.

The company’s first console lets gamers play their old NES and Famicom cartridges without the need for a legacy console. Features include a built-in 7-inch display, play time of up to five hours, HDMI output and built-in kickstand. The Retro Champ is compatible with the company’s Super GamePad wireless controllers. Priced at a suggested $79.99, the console will ship in June.

With AutoPilot firmware and built-in GPS, this drone is billed as delivering a pro-level flight experience at a $99.99 price. Using a network of satellites to triangulate its position in relation to waypoints, the Journey Pro Video Drone can maintain its coordinates in a hover without drifting away, according to the company. It also features a one-touch Return to Home mode to bring the drone back to its base.

These gliders feature two modes for time-controlled flights: Quick Stream for short-range flights and Advanced Glide for long-range flights. A USB cable is included for charging the internal battery. They’ll ship this spring and summer for $24.99, with the newest additions including TMNT Raphael, Spiderman and Batman.

Geared toward toddlers and preschoolers, the block set interacts with an electronic cube to respond with sounds, educational songs and phrases. Suggested retail is $39.99 for 61 blocks. They’re currently available at Amazon and will expand to other retailers later this year.

This little robot buddy with color-changing eyes can be trained to operate via gesture controls. It can walk, do wheelies, spin and dance, according to the company. Three colors are offered: purple, red and blue. Novie will sip this fall for a $24.99 suggested retail.