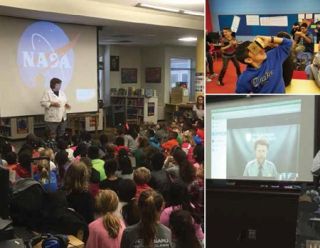 “My goal is to get our students out of the classroom any way we can, and we already do more than 100 virtual field trips a year, so when Discovery VR (discoveryvr.com) became available, we knew we’d add it to the mix,” says Dacia Jones, district science specialist and STEM educator for Durham (NC) Public Schools (DPS), where only a couple of schools are not Title I.

DPS students haven take more than 100 virtual field trips with Discovery, including exciting new virtual reality field trips. Teachers download the Discovery VR app and use it on iPads and other devices; all students have to do is manipulate the mouse on their computers to move the picture around and see things from different perspectives.

Earlier this year, a fifth-grade class got to ride a roller coaster virtually with its developer. “He showed them how he engineered the coaster and we did a hands-on activity while we Skyped; then he rode the roller coaster,” says Jones. “Later, Discovery made a VR video called ‘Get Ready for the Drop.’ Our teachers were able to go back and revisit that experience.”

Jones writes lesson plans to go with the Discovery VR clips. For “Lion Whisperer,” in which students watch a man speak to a lion, she came up with activities to do before, during, and after that are tied to the North Carolina science standards. Luckily for her, Discovery is adding new VR clips every week.

When DPS first graders took a virtual field trip to the Sistine Chapel to learn about gravity, the docent described how Michelangelo lay down on his back on scaffolding and painted. Afterwards, the teacher asked the students to crawl under their desks – she had taped paper under each one. She handed out crayons and instructed them to draw. After a few minutes, everyone’s arms hurt. That led to a conversation about the effects of gravity. “Like the students who rode the roller coaster, this was so real to these students,” says Jones.

Getting ready to go to the Virtual Vortex and use zSpace stations at Teasley Middle School. “When people hear the words 3D or augmented reality, they get scared because they don’t know what it is, but we built a technology-rich school two years ago and teachers love it,” says Leah Bleisath, STEM teacher at Teasley Middle School in in Canton (GA). Students visit the Virtual Vortex and learn with 13 VR stations set up as a zSpace STEM lab. Each zSpace (zspace.com) station accommodates two to three students. One student lifts, turns, or takes apart virtual holographic objects using an interactive stylus. The other students make observations and record data. All students wear custom 3D glasses to create a communal VR experience.

“We use an AV rover to project a five-to seven-minute 3D video on a blank wall and students wear their 3D glasses and become immersed. If we’re teaching about blood flow, we become a blood cell. Instead of looking at a picture of a vein in a book, you are actually inside the vein,” says Bleisath.

If a teacher doesn’t want to come up with lesson, there are built-in lessons. Students complete their own activities, such as using a stylus to dissect a heart. They can look at all four chambers, make the heart transparent, and stick a video camera inside to see all the components. Best of all, the heart even beats. Math students can use the stylus to pick up a 3D rhombus and count its sides. “It’s similar to using a manipulative but goes beyond that,” says Bleisath. “They pick it up, bring it to them, and twist their arm until they see the back side. They can move pieces around to learn formulas or walk through a real-world problem to fix it or create something to solve it.”

Bleisath’s goal is for all 90 teachers to visit the Virtual Vortex; so far, all of the math and science teachers have been there. “We’ve taken learning to the next level. A lecture doesn’t last, but once a student becomes that vein, they remember it.”

When Patricia Brown, technology integration coach at Old Bonhomme Elementary School in St. Louis (MO), worked with second graders earlier this school year on a solar system unit, she was able to take it to a new level, thanks to AR and VR apps. With the MoonWalking app (moon-walking.com), students can simulate walking on the moon as they watch the first moon landing. “We used iPads, and it was like we were landing in the classroom,” she says. “Neil Armstrong actually landed on someone’s head.”

Elementary students bringing the solar system to life with AR apps like MoonWalking. By going through the process and listening to the actual recordings of Armstrong talking to the President, students experienced a deep connection.

Students also used a wall chart/interactive poster and 3D pop-up books from from Popar Toys (popartoys.com). When they scanned the AR pictures, they became 3D versions of planets. Brown set up four rotation stations for research: the wall chart, the Planets 3D app, the MoonWalking app, and ThingLink (thinglink.com). “It was so much better than just going to a Web site and conducting research,” she says. “We manipulated planets, viewed them in 3D, spun them around. It’s particularly great for kinesthetic and hands-on learners.”

Next time around, Brown wants students to use Aurasma (aurasma.com) to create their own ARs by recording a video of themselves talking about the planet they researched.

Although she’s currently using AR apps mostly for science and a little math, she started out by using them for literacy projects. She photographed students reading books by Mark Twain and created big posters of each child holding their book, and then she created Aurasmas of them talking about their books. When students scan the poster, they hear a book trailer.

“AR gives us the possibilities to create awesome experiences for our students,” says Brown.

Schoenbart piloted the Expeditions Pioneer program last November with 18 different classes in every subject, including cultural arts, AP, special education, science, and English. Teachers designed a lesson that used the Expeditions field trip as a tool to engage students and process information, and Google employees showed up in a Google car with three cases of Expeditions, which included devices with the Google Cardboard viewfinder installed on them. Every kit had 30 devices and a tablet for the teacher. “Students hold the viewfinders up to their faces and are immersed in a 360-degree experience,” says Schoenbart. “I put on a field trip to go to the Congo, under the sea, or the Eiffel Tower, and all you can hear is ‘Whoa!’ It’s really powerful.”

Engineering teachers viewed landmarks to discuss math and science; history teachers took students back in time and all over the world. Teachers can ask guided questions and provide an in-depth view of the locations. “What I love most is that it’s a resource, a tool, or a supplemental activity to enhance and ground what teachers are already doing. We may never go to Europe, but we can experience a dozen different landmarks and cities.”

One day, Schoenbart hopes that students can create their own field trips by going into the community, taking 360-degree photos of the Hudson River, and sharing their own stories. “Once you add sound and narration, that’s where the real power comes in,” he says.

OUT OF THIS WORLD

Students embark on a virtual mission to the International Space Station (ISS) to observe Earth from space, monitor experiments, have on-orbit experiences, and see what’s it’s like to be an astronaut. Choose from a summer trip for grades 6 through 12 or a blended class for grades 4 through 12—or get a teacher license (grades 4 through 6) so that you can bring your classes on a virtual mission to the ISS to excite students about STEM. For more information, visit SpaceStationAcademy.org or or contact Kim Spangenberg at kspangenberg@thevhs.org.