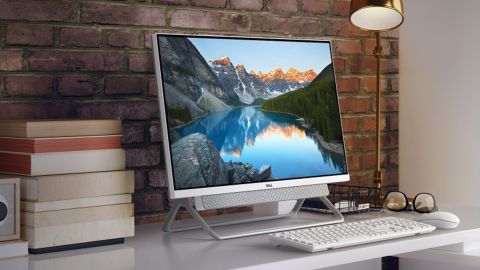 The Dell Inspiron 27-7790 desktop PC is a powerful machine with a large high-definition display, complete with pop-up camera which all make it ideal for remote teaching.

If setting up a virtual classroom from scratch at home seems daunting, try using an all-in-one PC, such as the Dell Inspiron 27-7790 desktop computer. Technophobes take note: Set up is as easy as opening the box, putting it on a desk, and plugging it in -- yet its hardware graphics give enough kick to master Zoom video lessons and more.

The system provides more than enough power to do everything from preparing lessons and grading tests to teaching over video. It offers the best of all-in-one systems with a secure pop-up webcam, integrated hardware graphics accelerator, and the ability to serve as a standalone monitor.

While the touchscreen version will cost you more, and there are higher powered machines out there, this sits at a reasonable price point while still looking modern. Features such as HDMI input and dual storage drives are also really appealing.

So is the Dell Inspiron 27-7790 your next best teaching assistant? Read on to find out everything you need to know.

It literally took five minutes to go from a sealed box to the working system and the best part is that the system’s only cable is a power cord.

With a 27-inch display, the Inspiron 27-7790 will feel luxurious compared to a cramped notebook or tablet screen. It offers Full HD 1920x1080 resolution, and Dell’s CinemaColor software allows adjustments for movies, night use, and other situations. The Movie setting, which gives everything a warm look, works well for video teaching.

On the downside, the display of the $1,000 system is not touch-sensitive; the touch-screen version is $100 extra. We wouldn't bother paying the extra for the touch screen unless you have a good reason for it. With a screen this big you'll likely sit far enough away that touching the display with any regularity will be a stretch, and you'll also avoid smudges.

Happily, it comes with a wired mouse and keyboard that matches the look of the system and slides under the screen if desktop space is tight; some models include a wireless keyboard and mouse.

The display can tilt as much as 25 degrees away, which can cut screen glare and reflection from overhead lighting, and is ideal for aiming the webcam for a face-to-face video lesson. By contrast, the Acer Chromebase 24 all-in-one system has a way to independently adjust the camera’s angle, which is a neater solution.

You don’t need to cover the webcam with a sticky note so that it doesn’t accidentally broadcast you eating your lunch to the class because the camera stays retracted until you’re ready to teach. Once you activate it, the camera module physically pops up and is ready for a video lesson, a conference with a parent, or to record.

Below the screen is a speaker bar that can handle movie soundtracks and music but works best with the spoken word, ideal for presentations or YouTube instructional videos. The system has a single microphone on top that sounds hollow, so you might be best served by using a separate microphone or headset.

On top of tapping into 802.11ac Wi-Fi and Bluetooth 5, the Inspiron 7790 has a good assortment of ports, from four USB 3.1 and a USB-C connection to a wired network plug, a headphone jack, and an SD card reader. All are in the back, which can make it awkward to quickly plug in a headset for a video lesson. That said, the inbuilt Bluetooth means you can use a wireless headset easily.

With a very thin frame, the Inspiron 7790 is no bigger than the typical 27-inch monitor and takes up 7x24 inches of desktop space. Yet, it has a full PC hidden inside that uses a 10th generation quad-core Intel Corei3,  i5, or i7 processor. Rather than using a desktop processor, the Inspiron uses laptop versions. This means it can have a svelte design and not draw too much power. The downside is it's not quite as powerful as a traditional desktop PC.

The i5 system we tested included 8 GB of RAM, which can be outfitted with up to 32 GB. We'd recommend opting for a little more; for example, 16 GB would allow it to multitask more effectively and future-proof it more.

It offers the one-two storage punch of 256 GB solid-state and a 1 TB hard drive. This gives the best of both worlds: the speed of an SSD for quick boot times and big storage reservoir of a traditional spinning hard drive for storing videos, images and audio.

The device has a secret that turns the Inspiron 7790 into a solid machine for graphics-intensive tasks like basic gaming, and video teaching. In addition to the stock Intel UHD 620 graphics engine, the system offers a high-performance Nvidia GeForce MX110 graphics chip and 2 GB of high-speed video RAM inside.

The system didn’t lag when editing video lessons and it worked much better than a Surface Pro 4 for leading Zoom and Meet video lessons. It went through 45 minutes without a glitch, any dropouts, freeze-ups or audio sync problems.

The screen has one more remote classroom trick: With two HDMI ports, one can be used for sharing its screen with a projector or large display, while the other allows it to be used as an external monitor via its HDMI-in port.

All the great specs and features contributed to surprisingly strong system performance. The Inspiron 7790 scored 1,085 and 2,620 on Geekbench 5’s single and multi-core processor tests, and a 4,653 on its Compute series of tests that mimic how computers are used.

This is spot-on in the single-processor tests with an HP Pavilion 590 desktop with a slightly older six-core CPU. With two fewer cores and a processor designed for laptops, however, the Inspiron 7790 was second-best compared to the Pavilion 590 by a wide margin: 5,068 to 2,620.

When it’s running, the Inspiron 7790 uses 48.6 watts of power and 3.7 watts at idle. This makes it inexpensive to use at school or at home for remote education.

An annual power bill of about $12.50 can be expected if it’s used for eight hours per day every school day at the national average cost of 12 cents per kilowatt-hour.

All told, the Inspiron 7790 shows that an all-in-one system can be a power-consumption miser without sacrificing the ability to lead an interruption-free online video class. Its performance was more than enough for all teaching tasks and the system doesn’t require anything more than being plugged in to become the center of a classroom or home teaching effort.