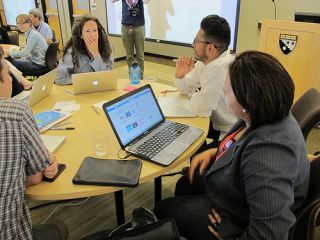 The new Computing Programme of Study has been criticised not only for its content, but also for the terminology it uses. In particular, it speaks about “computational thinking”, “algorithms” and “decomposition”. “Surely”, the argument goes, “they could have used ordinary everyday language?”

Had “they” decided to do that, there would no doubt have had so many people panicking about it all. So, it’s a compelling suggestion. It just happens to be wrong.

Photo from an event called "Creative Computing Symposium". I love this picture because it shows that computing involves talking to people! Picture by ScratchEd Team http://www.flickr.com/photos/scratchedteam/

Computing, like any other discipline, has its own terminology, and we should use it, and our curricula should use it. My field used to be Economics. I’d have been horrified if there was an Economics Programme of Study that stipulated that pupils should learn how to “balance up alternatives”. That is what they would need to learn to do, but the correct term is “opportunity cost”. And as an ICT teacher, advisor and specialist, I was clear that the ICT Programme of Study and any schemes of work arising from it should use terms like “data logging” rather than some half-baked but easier-to-understand alternative.

There are several reasons for my position on this issue of terminology.

First, specialist terms have specialist meanings. For example, “stress” means something different to a physicist than it does to a psychiatrist, and our everyday use of the word is completely different again. It’s much easier to learn the right terms and their meanings in the first place than to have to try and unlearn them at a later date.

Second, although we don’t necessarily want every pupil do become a computer scientist, we do want every pupil to be able to think like a computer scientist (otherwise, what’s the point of the whole exercise anyway?). That means, we should expect them to use the correct terminology. When I was an ICT teacher, for example, in the early days pupils (and some teachers) would refer to the computer monitor as a “screen” or a television”. I always corrected them.

Third, I think there is an important psychological consideration, one that potentially has practical consequences. If I were a Head of Computing or a Computing teacher in a school and I wanted to ask the Headteacher for more money or time, I want to know that I have the backing of a Programme of Study that makes it clear that I am teaching a proper subject, a niche one with its own “jargon” and way of looking at the world.