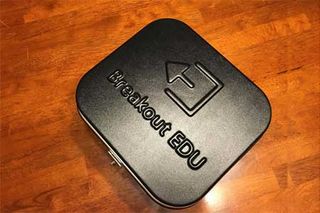 Today was my last day with students this school year, and we closed out the class with my first custom #BreakoutEDU game. I played my first BreakoutEDU game--Time Warp--this fall and my love for the concept has taken off since then. I was able to help facilitate the game a few times at conferences and at school, which led to a collaboration with a math teacher in my building to have students design breakout rooms.

These experiences and successes, and the fun and challenge, led me to an “a-ha!” moment last Friday: What better way to end the school year than with a breakout game? I wanted to bring our time together to a close with teamwork, critical thinking, and some fun. When I realized that I didn’t have a kit or any supplies, my panic quickly turned to excitement when I decided to build my own game.

This game involved a mix of digital and physical clues, all of which were designed based on our English 10 curriculum and class. The answers involved literature, writing, social media, and more, which was a great way to end the year. I learned a lot in my first breakout creation and will share some of my experiences and reflections on playing, facilitating, and creating #BreakoutEDU games throughout this post.

Time Warp was my first Breakout experience. I was able to play at the NYC Bronx #GafeSummit and to help facilitate games at both #edcampNJ and #edcampSWCT. I went from one game as a player to a co-facilitator, and it was a blast helping out. I’m by no means an expert in any of this, but had so much fun jumping right in.

It was really interesting learning from my mistakes a as a player and watching others’ experiences when I facilitated the games. The different styles of collaboration and teamwork make for powerful reflection, which is an important part of any game.

From Facilitating to Creation

About a month ago, a math teacher reached out for help in designing his own escape-room style activity. He had a big vision: have his math Math and Architecture students develop escape rooms that incorporated math, technology, and storytelling. He wanted to build them around the morals of Aesop’s Fables and to take over the school library, inviting students, teachers, and classes to come test their skills and break out. So we did. And it was awesome.

To start, we played Time Warp to introduce the concept of BreakoutEDU to the students. The teacher was looking for an immersive experience, and was really describing the games that he didn’t yet know existed with Breakout. Being able to help bridge those connections and guide the students throughout the process was a great experience as a coach. This teacher and his students did a phenomenal job, and I got to support them and watch their success.

After reflection and planning, the students designed and built their rooms. They used everything from drama set pieces to found props and paper mache. Many rooms involved a few real locks of all varieties, and most used technology like QR codes or e-mail autoresponders. I also compiled a list of easy technology resources to guide them (many of which were culled from the Digital BreakoutEDU site--a great resource).

Watching the math students create and then others play their games was inspiring. Throughout the three days, the rooms probably ran for over a dozen different classes. The students and teacher did a great job in executing this grand vision, and I was inspired to bring it into my classroom.

The logistics of our game came to my quickly as a I made connections between our year and literature with locks and clues. Wiesel’s tattoo number could open a lock and directions from Spiegelman’s trip in Maus could open the directional. The numerical lock had words that fit important quotes from Fences. The basic structure fell into place quickly but the details took time.

Students started by filling out a feedback form for the year, which led to the next step of solving a jigsaw puzzle. The puzzle provided the numerical lock clue. At the same time, students were sent an auto-responder e-mail with a new clue. Some clues lined up chronologically but others were scattered, so students could work at different paces and in different ways.

This image was created with Google Drawing and then turned into a puzzle with JigsawPlanet.com.

In the end, all three of my classes broke out. We were able to discuss and reflect on their work and progress, too. I was also able to use their feedback to improve the game throughout the day. For example, I quickly learned that I needed more physical clues with large classes to encourage movement and collaboration. Otherwise, the students relied too much on technology and waited for more information when it wasn’t always coming. The promise of hidden clues around the room--like a key hidden in the Hercules page of the mythology encyclopedia (This son of Zeus holds the key!)--kept them invested, thinking, and engaged.

In the End: Do Good

When they opened the box, the students found a QR code that led to the video below. It’s how I always intended to end our year, with the classic words of Mr. Feeny: do good. Not do well; do good.

It was nice to be able to end the year with a message that mattered throughout this Breakout challenge. Next year, I want to do more with #BreakoutEDU throughout the school year, starting with team building on the first day of school. Today was fun and memorable for me, and I hope for my student, too.

What are your favorite #BreakoutEDU games? What should I use or adapt to start the school year with 25 high school students? Share your favorites and recommendations in the comments or on Twitter.

Adam Schoenbart is a high school English teacher, Google Education Trainer, and EdD candidate in Educational Leadership. He teaches grades 10-12 in a 1:1 Chromebook classroom at Ossining High School in Westchester County, NY and received the 2014 LHRIC Teacher Pioneer Award for innovative uses of technology that change teaching and learning. Read more at The SchoenBlog and connect on Twitter @MrSchoenbart.