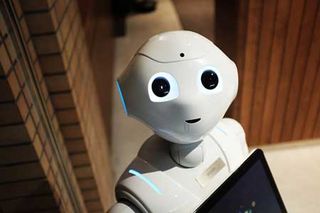 People have been fascinated by robots for a very long time. Believe it or not, robots, or ‘automata’ were a big thing in ancient Greece, especially in Alexandria. According to an article called “In whose image? Ancient and medieval automata” by E.R. Truitt in a book called “Robots: The 500-year quest to make machines human”, by Ben Russell (Ed):

“Engineers of the ‘Alexandrian School’ [between the third and first centuries BCE] designed, built and wrote about complicated moving figures.”

These early examples of robots were designed partly to entertain, and partly to illustrate the workings of hydraulics and pneumatics.

We’ve become used to robots in our own lives, in the form of industrial machines that can assemble cars or pick out items in an Amazon warehouse, much faster and more accurately than human beings ever could. In fact, an old joke is that in the factory of the future the only living creatures will be a man and a dog. The function of the man will be to feed the dog, and the function of the dog will be to prevent the man interfering with the machines.

Although it’s a bit of a stretch, we could widen our understanding of what a robot is by including household appliances like dishwashers. After all, although they don’t look like people, they still carry out tasks mechanically and automatically once they been programmed and started up.

In classrooms up and down the country, kids are building robots in the form of trucks or ‘lego people’ and then programming them to carry out simple tasks.

However, we are now entering a new era of robotics that takes us into completely unknown territory, and which poses some interesting challenges.

Take human vision, for example. We can easily distinguish between a mound of flour and a dollop of ice-cream. To a computer’s ‘eyes’, though, they both look identical: a white mass. So what? Well, it means that the age of having a robot servant to carry out all the different kinds of household chores is still some way off. If it cannot distinguish between flour and ice-cream, it cannot easily clear up the mess — and that, surely, is one of the simplest tasks you could ever ask a robot to do.

What should robots look like? So far, apart from a few prototypes, robots have either looked like mechanical men (on the whole) or not like people at all. If you were confronted by a robot that looked so lifelike you were not absolutely certain that it was a robot, would you feel ok about it? A few of us might find it somewhat disconcerting, although some studies have found that people tend to form a bond with human-looking robots — including scientists who have reported that they feel uncomfortable about leaving the robots they are working on alone in the laboratory at night!

On the subject of forming a bond with robots, there was the famous case of Judith Newman’s son, Gus, who formed a ‘relationship’ with Siri. (Newman has since written a book about this entitled “To Siri, With Love: A mother, her autistic son, and the kindness of a machine”.) To make a long story short, Gus taught himself the social skills of small talk by conversing with Siri.

That is one example of a machine helping a person by behaving like a person itself, at least on a relatively superficial level. But we are starting to see the development of intelligent robots, ie ones that can learn from experience, and can figure out how to solve problems, all courtesy of the progress that has been made in Artificial Intelligence and machine-learning.

The most interesting part of all this is, arguably, not so much the overcoming of technical challenges, impressive as that may be, but more basic ones to do with our feelings. In a book to be published on 17th October 2017, Kelly and Zach Weinersmith look at a range of technologies that are starting to be developed now, including intelligent robots and computer-brain interfaces. (“Soonish: Ten Emerging Technologies That Will Improve and/or Ruin Everything”.)

Let’s get down to basics: a robot helper can dispense medicines at the appropriate time. But what if, instead, it could take decisions on its own. Would you feel comfortable letting it look after your elderly mother? As the Weinersmiths comment about one such scenario: “What could possibly go wrong?”

Another superficially simple question is: Should robots or intelligent machines be male or female? There is a fascinating article about research into how people interact with a robot according to its perceived gender. One question that arises, then, is: Could robots reinforce the notion of traditional male and female roles, such as carers and helpers being associated with the latter?

Another question is: Are we all barking up the wrong tree anyway? Rather than, for example, developing robot valets to park our cars, wouldn’t it be a whole lot simpler to just make self-parking cars? (For an interesting article on robot valets and automatic parking, see the Forbes article The Future Of Smart Parking Is Integration With Automated Technology.)

Given that the students learning how to construct and program simple robots today will be adults in a world in which intelligent or quasi-intelligent machines will be ubiquitous, we should be asking them to consider these quintessentially human questions now.

Terry Freedman is an independent consultant and freelance writer, He publishes the ICT & Computing in Education website.