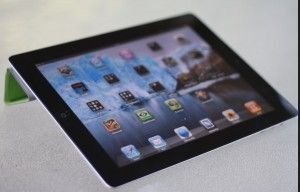 Langwitches readers know that I LOVE my iPad! What I like most about it, that it constantly changes. It is never the same iPad than the day before... a new app was added... an old app was updated... something I could not do yesterday is suddenly possible today... my iPad is constantly growing and evolving.

When you google the term "iPad fluency", the top search results return nothing but links to apps that promote fluency in reading. I am talking about the different kind of fluency though. One of my favorite metaphors is the one comparing being able to speak multiple languages to the ability of communicating in the 21st century. Read an older post of mine Skilled? Literate? Fluent? which expresses my thoughts on the differences between these three terms, the connection and process to move easily between these stages with the goal of becoming fluent. I have similar feelings when working with the iPad. Let's look at the definitions of being skilled:

As I first held the iPad in my hands and started "playing", I was out to become SKILLED at using it. I wanted to:

Then as the usage of "how" to do certain tasks on the iPad became automated ( I guess I was/am in the literate stage now), my goals were to find and use specific apps that allowed me to:

I am at the point where I am looking for FLUENCY now, not just individual apps that allow me to accomplish individual tasks. By fluency I mean the ability to:

As I look to add apps to help my iPad evolve and to contribute to the fluency I am seeking, I look specifically for the abilities mentioned above. I don't feel fluent yet...there are too many hurdles in connecting individual tasks to "express myself" and share with the iPad alone. I get stuck... I have to find other ways around the "hurdle" to communicate... that is what hinders fluency. As long as I have to:

I want to create, connect, re-mix, import, export, share, collaborate, design... all without a "translator"...within the iPad... I am not fluent YET... but it's coming... What are some apps that help you in your fluency? What are some tasks the iPad could/should support in order to make it a better fluency tool?