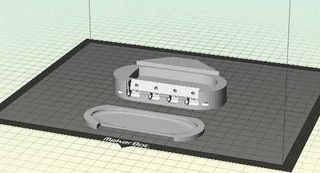 The Horizon Report: 2017 K–12 Edition, the goal of which is to identify technology that’s likely to impact teaching, learning, and creativity, identifies makerspaces as having “potential relevance to teaching, learning, and creative inquiry in K–12 education” within the next year. (www.nmc.org/nmc-horizon-news/nmc-and-cosn-release-the-horizon-report-2017-k-12-edition/) And many see the 3D printer as a staple in a makerspace—a “must have,” a shiny new toy, the mark of a 21st-century school in the know. Many schools purchase 3D printers to keep up with trends, not realizing that they’re also valuable tools for student learning.

When the Genius Bar students from Yorktown High School in Yorktown Heights, New York worked to earn a 3D printer through a Khan Academy, Google, DonorsChoose challenge in 2015, they had no idea they were getting more than a shiny new toy. At first, students were at a loss for what to do with it. Some thought it was a popcorn machine, and others thought it was a microwave, but once word got out, students flocked to the library to ask if they could use it. Students were told there was just one rule—whatever they printed had to be something they designed themselves.

Although the initial projects were simple key chains and customized cell-phone cases, some students rose to the challenge and designed objects to solve problems they identified. One student was missing an axle nut on his skateboard, so he carefully measured the remaining nuts and bolts and set about designing and printing a replacement. Although the first, second, and third attempts failed to meet his needs, the student learned how to measure accurately to create the proper incline planes to manufacture an axle nut that would fit just right on his skateboard. He solved the problem by compressing a spring to see what happened to the threads, observing the way the planes changed. He learned through trial and error, but more importantly, he learned that failure is okay and that perseverance would allow him to reach his end goal.

Students in Jeff Cerar’s Precalculus class use the 3D printer to create three-dimensional representations of conic principles that are found in the real world. From suspension bridges to enlarged contact lenses, students work in Tinkercad and SketchUp to create accurately scaled models of the principle they are exploring. Students learn the math behind the conic principles, as well as the real-world applications, and how these affect our daily lives. Students in Dan Moore’s AP Physics course use the 3D printers to design and print rocket nose cones and tails. The rockets are then launched in a competition, and students record data about the launch. In addition to learning about the principles of physics behind rocket design, students are also learning how to measure accurately, make predictions, and analyze data from the launches.

Samantha Caddauan, class of 2017, spent an entire year sketching, designing, printing, and redesigning what she hoped would be a low-cost, highly functional prosthetic device. Samantha learned how to take an idea on paper to a digital 3D rendering and a printed product. She spent countless hours printing, fixing, reprinting, and fixing again. She taught herself Tinkercad, and by the end of the year she had a working prototype that she presented at science and engineering fairs. According to Samantha, “I learned more about getting around a problem creatively. Sort of like problem solving skills but different. With my kind of project, I was able to nurture a totally different kind of thinking that we don’t usually go over in school. In school, usually there’s a way to get from point A to point B or at least a straight answer for a problem. But for me, I was given a problem and I had to come up with various solutions and then work my way down when they didn’t work. It really gets you thinking and there’s a lot more freedom to it. It makes it so much better when you get over that obstacle yourself.” Notice that she didn’t say she learned how to create a 3D design or how to use a 3D printer.

At James I. O’Neill High School in Highland Falls, New York, when ninth-grade English teacher Christopher Page wanted an alternative assessment for Of Mice and Men, he worked with school media specialist Sheri McNair. Together they designed an assessment that asked students to create a board game that involved challenging questions, symbolism, and step-by-step instructions. Among other tasks, students had to use Tinkercad and the 3D printer to design and print game pieces that symbolize something from the story. To complete this project, students had to dissect and understand the novel. In addition, they learned game design, planning, strategic decision-making, and how to create an aesthetically pleasing game with set goals, rules, and challenges.

Students at James I. O’Neill are also encouraged to design solutions for their own problems. One student had earbuds that wouldn’t work unless the cord by the input jack was bent a certain way. He borrowed one of the 3Doodler pens from the makerspace, bent the cord to the working position, and created a plastic covering around the cord to prevent it from moving. The student was able to stabilize the cord in the working position, and by using ingenuity he saved the cost of a new set of earbuds. Another student created a stand for his headphones at night, while a third created a shelf for her amiibo figurine collection and a cup holder. Students don’t just use the 3D printer to solve their own problems. They’ve also designed and printed gifts for others. One student created a LEGO-compatible light switch cover for her brother for Christmas, and another created a three-piece lockbox.

3D printing has multiple applications in an educational setting. In addition to addressing six out of the eight Common Core Math Standards directly—all eight if the projects are designed well—incorporating 3D design also addresses the seven core principles of the Next Generation Science Standards, engaging students in hands-on, problem-based learning with real-life applications. 3D design addresses the cognitive learning domain, but it also addresses the affective domain as it encourages students to face challenges head on, iterate, and embrace failure as an opportunity to learn.

As with any technology, purchasing the technology will only take students so far. There also needs to be careful consideration of the objectives of purchasing the printer, and educators need to think about how the printer can add to the existing curriculum as well as what new pathways can be created for students.

Resources for 3D Printing in Education

Makerbot recently released the Makerbot Educators Guidebook: The Definitive Guide to 3D Printing in the Classroom (www.makerbot.com/educators-guidebook/). The guidebook offers advice from educators using Makerbot printers in their classrooms and makerspaces. In addition to practical advice on how to set up and maintain 3D printers in educational settings, the book offers nine fully integrated lesson plans with step-by-step instructions so that even a 3D printing novice can learn. Additional lesson ideas can be found on Thingiverse Education (www.thingiverse.com/education).

HoneyPoint3D (education.honeypoint3d.com/) and Tinkerine U (tinkerine.com/about-tinkerine-u/) both offer several free online courses in 3D design and printing. Tinkerine U also offers challenges in which students can engage. Tinkercad and SketchUp Free are both popular Web-based 3D design platforms, and both offer step-by-step tutorials to get started.