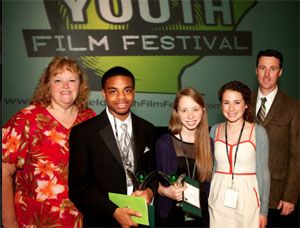 It’s not Hollywood, New York, or Cannes, but for a particular group of students, this red carpet will be unforgettable.

This time of year we traditionally award students who over the year score the highest on their exams, attend class every day, participate the most in school activities, achieve glory on the field or court.

We don’t always get a chance to recognize the kids behind the camera–our best storyboarders, screenwriters, special effect magicians, editors–our best storytellers.

For the fourth year, I had the honor of attending the Greenfield Youth Film Festival. The regional event, held at our local Keswick Theater, recognizes the talents of student filmmakers.

The Greenfield Youth Film Festival provides talented kids with real audience beyond our own website, where they are judged by university film professors and real film professionals.

They were all winners. Their creative spirits could never be captured or assessed or shared by a bubble test.

I asked our Springfield Township High School Quest Class and their teachers what they learned along the way.

(With apologies to Laura Joffe Numeroff)

If you give a kid a camera, it can be unpredictable . . .

The Secret Life of Beekeepers from Spartan TV on Vimeo.

She will run away with the circus. (Michelle)

If you tell the kid that sound is everything in film making . . .

If you tell a kid the film should have personal meaning . . .

If you give a kid creative freedom . . .

If you give a girl a camera, she will want to film something she knows about, her own swim team . . .

Seeing that most of her footage will be of a pool, she’ll probably take a very long time trying to figure out what shots are of what, and this will most likely frustrate her. (Rachel)

If you tell a kid to treat her actors with respect . . .

She will make her family play ridiculous roles. She then will boss them around for an entire day until she gets all of the film she needs. And when it is all over she will realize how patient they were and be forever grateful. (Sarah)

If you tell the kids to ask their friends to act . . .

A magic skateboard. After some time, he will find out that it has the ability to change his clothes. He will get annoyed after having to film the same trick multiple times. The fact that one small change in the shot can ruin the whole scene will frustrate him. He will also learn to hate editing. (Yael)

If you give a kid a camera, she will learn about planning . . .

If you are the teacher giving those cameras to the kids. . .

You’ll learn quickly that projects like this are all about partnership. One teacher alone could not run this activity. You’ll learn with your students that the biggest thing is pre-production. Kids don’t initially realize how much time goes into thinking, writing, rewriting–how many drafts it takes to before they even pick up a camera. They are not usually ready for all the changes that happen during filming, during editing. They will want to move on and not respond all that well to sharing drafts and critiquing. That is, until they start hearing their scripts. And then a dialog will begin, and that will snowball into a conversation about storytelling. (Dan Meder, teacher)

When I gave your kids some cameras . . .

(but not until screenplays were complete and critiqued) I found they became a family of constructive critics who supported each other beyond my wildest dreams. Students wrote and rewrote, up to eight drafts. They laughed and they cried as they lived each other’s projects. They were excited as they saw each script come to life in film. And I watched them celebrate together as winners were announced at the film festival. It was all a joy to witness. (Marlene Thornton, teacher)

If your student wins the big prize of the night for documentary . . .

He’ll think back on his process. He’ll be surprised and overcome with emotion when he learns that after all that, his film is award-worthy. And he’ll be glad he rented a tuxedo for the event. (Maurice)

Grown-up to Growing Up

As I watched all of these student productions, I thought about those takeaways myself.

As I wrote last year, preparing for events like Greenfield offers students opportunities to use their brains, their hearts, their voices, as well as the technological tools available to them to:

While we are lucky that our region formally celebrates student creativity with an event like Greenfield, these types of celebrations are replicable. Our students regularly produce and share on YouTube, fan fiction sites, DeviantArt.

We can foster mainstream recognition of creativity and the celebration of student work within our school communities.