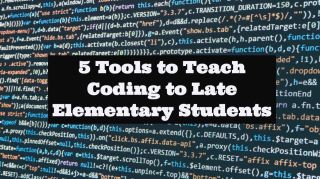 Let's talk about computer science. It's an area where we need more and more people that know what they are doing. To get those people, we are going to have to teach it in schools, and thankfully many schools and states are moving that way.

I think coding is best taught as we would teach a world language. The younger we start students, the better off they will be. There are tools out there that allow students to code with arrows and with lines, but eventually, students are going to have to move into block coding. That's where this post focuses on!

I just got one of these coding robots, and it may already be my favorite. That's without even being able to get the full functionality of the app as I got one before the actual release with an Alpha version of the app.

I like this as a starting place for late elementary because there is so much I can do with it. I see many folks buying coding robots to fit specific needs, and I think this robot eliminates much of that. You can get this, and then purchase others more just to be varied.

Root's functionality for late elementary starts with the app. It allows me to start students who have never done anything off with an arrow based coding that is both functional and not overly childish where it turns off older elementary students. It then progresses to a block coding to fit most of your students, and you can also move your high flyers to text-based code.

What you can do with the robot adds to the experience. To start, it has a marker holster in the middle which can be raised and lowered to make drawing easy. It's size and shape also can come in handy as it allows you to build stuff both for it and to attach it. It climbs walls, and it has tons of sensors to set and play with. It truly is one of the first robot's I have seen that can fit more than one need.

This seems like a no-brainer, but Code.org is a great place to start with late elementary coding because it's free. They also have some great partners that both provide content and characters that late elementary students would be interested in.

Code.org is known for there Hour of Code games. They are especially known for games like Star Wars, Frozen, and Angry Birds. Those games are almost perfect to introduce young elementary students to block coding, but code.org is definitely much more than that. They have tons of courses, materials, and other activities for students to do, and they have all the curriculum a teacher might want. They indeed are a good starting place for anyone starting off with learning coding.

Tynker's strength lies in its broad use. Tynker is a block-based coding tool that is on almost every device, and it allows for several devices (like Drones and Spheros) to access it as a coding platform. It also has a classroom setup which allows the teacher the ability to set up classes. It means that there is a little something for everyone!

Scratch's open source feel and interface mean that like Tynker it can be used in a multitude of situations. At its core, Scratch is a block-based coding platform that lets you build animation which are many times oriented around their cat mascot. It can take off though by connecting other things to it and creating your own commands. Both Hummingbird Robots and Raspberry Pi's connect to it, and through them you can build robots and almost any other electronic piece you might want.

Sphero Sprk's strength lies directly in its shape. The round shape of a Sphero Sprk means that you can build almost anything for it. You can build chariots, obstacle courses, boats, and much more. You can then code them all. It makes Sphero a great way to add coding to almost any curriculum.