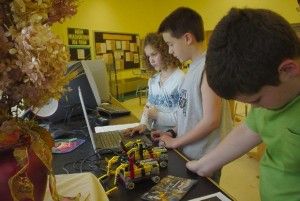 Digital games come closest to active and that’s why they’re successful on their own, and when tied to education outcomes. Arthur C. Clarke may have said it best, “Any sufficiently advanced technology is indistinguishable from magic.” I believe in Magic!

Someone just asked me if I’d written anything about 3D. Well, yes, but not for some time. My thinking has sort of jumped lightyears from where it started with 3D. I began getting serious about 3D, when I began covering cell phone use in classrooms for Math learning. I still like a small screen for 3D possibilities, but my mind has always been in the wearable technology clouds—and that thinking, with me, goes back even further.

In following #DellWord 2012 in Austin, via the online streaming route, I watched and listened to a presentation on technology innovations. It shared some wonderful possibilities dreamed, experimented, and built by students at the MIT Media Lab. One was a small viewer, which cost only a few bucks to produce that slid onto a smartphone for prescribing eyeglasses—in a matter of moments. Can you imagine this vision tester used in developing countries, or in the hands of health workers, and even as a self-testing device? While that was cool, another innovation idea looked familiar, it was a wearable technology that produced something similar to holograms, which allowed the wearer to interact with his/her environment. One style was a hat, another in a small backpack, and there may have been some using glasses as well. Now, that’s what I’m talking about!

I was writing about this stuff years ago for use with special needs students. Students without a voice, could wear a backpack, go up to a counter and order something. While that was happening years ago, the technology was expensive, bulky, and really not that completely interactive.

This Media Lab wearable technology is lightweight, laser fast, and close to ubiquitous. Oh yeah, I’m sure that bumping into others while wearing tech that interacts with your environment will be something to overcome, but imagine it seamless. Students in a classroom or anywhere could interact using, seeing manipulating math, science, engineering, and even time travel while visiting historical sites.

I may be way out there in what I’m looking for when it comes to 3D and Augmented Reality (AR), though. I want students to participate in 3D/AR adventures. I guess games are closer than pretty much anything done for education, today. Going beyond watching passively… and pushing, clicking or sliding is what I want to see. 3D active learning should actually be doing, participating, and contributing to the learning environment by the learners.

Business and corporate technology innovators are in a position to leverage these new possibilities, but I’m hoping they don’t forget K12 or Higher Education realms. At this point, education companies that claim 3D Interactivity really aren’t. Most pretend with stand-alone 3D images, and augmented reality that is either a gimmick, or a walk with a GPS handheld down the street. Using 3D video for supplemental resources to back up lessons and district prescribed curricula is just that, too—and not 3D interactive—nor is it augmenting reality. It certainly isn’t holographic, nor is it game-like.

It’s not that those supplemental resources are bad choices, it’s just that this old chalk pusher is looking for more than just showing something in a video, on a screen, wherever it is. Putting video online has only changed how it’s delivered. That is still a passive learning model. Part of it is that I don’t think most software and hardware companies are willing to go where I’d like them to go, so unfortunately the platform for almost all education software hasn’t changed much—and therefore remains mostly static.

Maybe MIT’s Media Lab partnering with companies like Dell, or possibly Google with its Glass idea and notions of wearables, or presentation device companies can help the cause. As in most cases, that’s if it trickles down from experimental, and then takes the leap from consumer to education. Now hypothetically, would that get to where I’d like to have it—more a simulation device? Well, we’ll see.

Those are my thoughts based on what I’ve seen. Again, I’d love to see more “Maker Movement” than “Hey kids, watch this and learn something.”