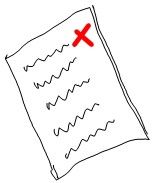 I love lists. I love to read articles made up of lists. I buy books consisting of lists. I WRITE books consisting of lists. In my opinion, list-writing is an essential skill for anyone who wants to 'make it' in any profession, but especially education. There is far too much going on at any one time to have to read lots of text in lots of reports and initiatives. The person who will succeed is the one who can summarise everything in the form of lists. THAT's the 21st-century skill we should be teaching our kids.
In my last full-time employment, I insisted that members of my team summarised complex issues for me on no more than one side of letter paper. That's a skill, and it was difficult. But they did it, and became good at it, because it was the only way they could be sure that I would not only read the information, but take a decision on it.

Through that approach, one member of my team summarised 6 months'-worth of emails, several long reports (well in excess of 100 pages each) and numerous sets of minutes from meetings, onto a single page. I read it, we discussed it, and we made the right decision.
I thought that was pretty good, until MY boss told me he would not read anything longer than half a dozen bullet points, or listen to something that took longer than 3 minutes to say. I thought he was nuts.

But he was right.

Too many people use too many words, and the words quickly move from being 'signal' to being 'noise'. In fact, I'm falling into the same trap myself in this article, so I'm going to start cutting down on the words …

In my ideal world,