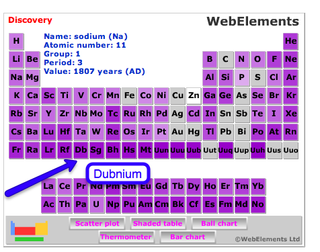 I am co-teaching in a Physical Science class. Actually, I am co-learning about the Periodic Table. Here is an interactive periodic table where you can look at the historical perspective by hovering over each element. No wonder I did not recognize the periodic table. Look at how it has changed since 1970!

On April 22, 1970, we celebrated our first Earth Day, now 40 years later we are finally taking our own cloth bags to the grocery store. Why? We hear that plastic bags may take from 20 to 1,000 years to decay. Things have changed here too!

In November 1980 the Superfund Bill was established to clean up the hazardous waste sites in the USA. Why? After years of stockpiling waste in metal containers the containers finally started leaking and spilling into the water supply and the land. We have made progress in this area.

In June 1990 the Spotted Owl was declared endangered in the West. It was fought by the logging businesses as it would stop their cutting of old forests. Some folks are now talking about taking some animals off the endangered list!

In education we have a similar timeline.
1970 - Jean Piaget's book, The Science of Education, is published. We begin an era of discovery based teaching.

1990 - Public Law 101-476, the Individuals with Disabilities Education Act (IDEA), renames and amends Public Law 94-142. In addition to changing terminology from handicap to disability, it mandates transition services and adds autism and traumatic brain injury to the eligibility list.

2001 - The controversial No Child Left Behind Act (NCLB) is approved by Congress and signed into law by President George W. Bush on January 8, 2002. The law, which reauthorizes the ESEA of 1965, holds schools accountable for student achievement levels and provides penalties for schools that do not make adequate yearly progress toward meeting the goals of NCLB.

September 2010
Education Nation will this spur on change? Is this the tipping point?

What has changed in the past 40 years in science, the environment, education? How much has stayed the same?