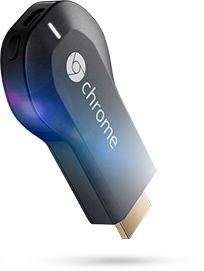 This weekend, I couldn't resist the $35 cost to purchase a Chromecast device. To be honest, I have an Apple TV and a Samsung Smart TV, so I did not really need an additional way to stream audio and video to my television. But what the heck! For $35 dollars it seemed to be worth a try.

I won't get into the mechanics of this entire setup at this point, but suffice it to say, it is a fairly simple process. But the question most would ask, "Why would I get a Chromecast? Here's some reasons to consider.

Right now, there are only drawbacks I see with the device. One is you can't stream your iPad device content directly to the Chromecast device like you can with the Apple TV. You also apparently can only stream from inside your Chrome web browser from the PC. But, then again, if you only goal is to get apps like Netflix or Pandora to another TV in your household or classroom, then Chromecast is an inexpensive option. The second drawback is when you do stream from inside a Chrome Web Browser tab it is painfully slow, in spite of trying to tweak settings according to the help settings.

Chromecast Device
Was it worth the $35 spent for the device? I would at this time say, "Yes." Chromecast is obviously a work in progress. I could see it as an inexpensive option for those wanting to access selected apps from their mobile devices with a television. I want to try it on an LCD projector, but I am afraid that will have to wait until Tuesday when I return to school. It might prove to at least be a cheaper option to get streaming video and audio in front of classes.