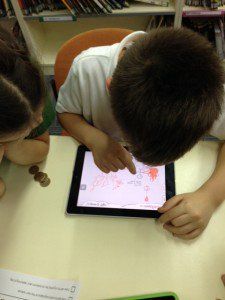 In the previous week; with my appclass, we worked on creating our own stickman stories.

I had mentioned about DrawaStickMan before on my blog. It is kind a creative storytelling website where you draw a stickman and play the story according to the directions. It has two different episodes and a game. For the class, we downloaded the DrawaStickMan app. It is both available both on Appstore and GooglePlay.

First, the kids played the games, some of them had already downloaded the both episodes and they played them both. We talked and brainstormed what could happen if there was a new episode. Then, I asked the kids to write a new episode for Stickman.

When they finished writing their stories, they wrote their reflections and their stories on Evernote. It is great that they came up with so many creative ideas!!

Here is one of my favorite stories:

Stick girl is in the library. Draw a book for the Stick Girl. Book is soooo big and Stick Girl goes in the book. In the book, there is a lion. Lion eats the Stick Girl but in lion’s tummy, she kills the lion. She wins.

The kids loved the app!

Some of them had played the game before so they moved on the activity quicker.

They are full of ideas but some of them still needed some support.

I told some of the kids that they could also record their voices on Evernote and they told that they had already figured it out and recorded their voices. Great!!

What could be better?

I could have asked them to use another app to draw and write their story but they would take more time.

Again, I had two students who hadn’t downloaded the app before, they don’t check Edmodo often, but this time they wanted to take note on the app that we will be doing in the following week. They are improving.

And certainly, wifi is a must in BYOD classes!

Özge Karaoğlu is an English teacher and educational consultant in teaching young learners and teaching with web-based technologies. She is the author of Minigon ELT book series, which aims to teach English to young learners through stories. Read more of her ideas about teaching English through technology and Web-based tools at ozgekaraoglu.edublogs.org.