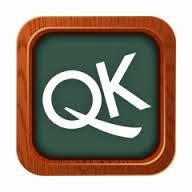 Quick Key Mobile is an iOS app for teachers that basically turns the iOS device into a scanner for quizzes and tests. Quick Key Mobile was created by Design by Educators, INC. (DBE), the Cambridge, MA. based company. This app first made a splash among teachers in March of this year when a grainy YouTube video demo of the prototype iPhone app went viral and racked over 450,000 views.The software platform, which includes an app for iOS devices as well as a web portal, will remain free for users to test during an initial introductory period.

In June, the company made headlines again when the Kickstarter campaign to fund the completion of Quick KeyTM surpassed its goal of $20,000. More than 300 people – many of them teachers – contributed between $25 and $150 to help get the app into the Apple App Store with the promise of a free version, despite never seeing the app work in real-life.

The company has come through on its promise to backers by releasing a free beta version of Quick Key MobileTM on the App Store and a web portal at www.quickkeyapp.com, inviting educators worldwide to test out the beta version of the app.

“So far, people from over twenty different countries in North and South America, Asia, Europe, and Australia have registered on www.quickkeyapp.com,” said Walter O. Duncan IV, Co-Founder, DBE. “We underwent an extensive international beta test over the summer and expect out new users to help us work out the software kinks over the following months.” For more information on Quick Key Mobile App, check it out in the iTunes App Store here. Also, more information from the Quick Key Web Site here.