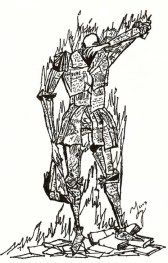 “Don’t ask for guarantees. And don’t look to be saved in any one thing, person, machine, or library. Do your own bit of saving, and if you drown, at least die knowing you were heading for shore.”

On Schoology, I took part in a group discussion started by a teacher who had flipped his classroom. He seemed like a great guy. He seemed creative, hardworking, and personally invested in his students’ success. The kind of teacher you would want your kid to have. Unfortunately, he had been asked by his principal to stop flipping his classroom because it wasn’t “working” for a minority of his students. Some kids weren’t doing well. These kids, this teacher stated, probably wouldn’t be doing well regardless of how he taught his class. He wanted to know where he went wrong.

I felt really bad for him. He talked about how he tried to do all the right things. He held them accountable for watching the video at home, made DVDs (using his own money) for students who needed them, and planned fun activities in class just like all the books and sites probably told him, yet some students still struggled; some even rebelled. This guy seemed like a great teacher. He was before he flipped his classroom and still will be after he un-flips his classroom (shame on that principal!).

Where he went wrong, I think, is where many teachers go wrong in education: they think implementing something in their class is a guarantee. I think he bought into the hype of The Flipped Classroom™. Flipping your classroom is not a silver bullet. It is not that anyone one thing that will solve all of your problems in the classroom; that any one thing doesn’t exist. Flipping your classroom will not make you a great teacher, nor will all of your students fall so in love with The Flipped Classroom™ that they all become model students.

“The Flipped Classroom: A new method of teaching is turning the traditional classroom on its head!” Have students listen to lectures at home and do their homework in class! Sounds to good to be true… because it is! Reality check: doing work at home, no matter what you ask students to do IS HOMEWORK. You can sugarcoat it all you want, but it is homework. A kid who does not do their homework normally will not watch the lectures at home even if you hold them accountable.

This is even more detrimental in a flipped classroom because now the kid can’t participate in that really cool activity you planned. At best, you can try to have him watch the flipped video in class, but now everyone knows who didn’t do their homework since he is made a pariah and cast out to watch the video alone. What is left for this student to do but act out or shutdown? He didn’t watch the video, he can’t do the activity, and he doesn’t want to look like a turd and watch the video alone. There is still homework in a flipped classroom that kids have to do for it to be successful and, if you “teach” your kids about why you’re flipping the classroom, as you try to sell them this scam of no homework, you are actually making it worse. That’s a big reason why I never told my kids what flipping is and neither should you.

Many teachers fail at flipping before they even begin because they make a big deal about flipping their classroom. They say, “we are going to do something new, exciting, and different this year!” People hate change. They fear the unknown. When you tell kids they are going to try something new or different, hell if you tell anyone that, you might as well be saying “we are going to do something that doesn’t work, so don’t take it seriously because if it was so great, everyone would be doing it!” Everyone is not doing it. If you flip your class, you are in the minority of educators. If you flip your classroom, I bet you are in the minority, if not the only teacher, in your school doing so. You are the outcast! To some kids, you are the weirdo teacher down the hall who is going home and recording themselves so kids can watch them on YouTube. “You have to go home and watch your teacher… that’s weird!”

So what is flipping compared to The Flipped Classroom™? As I prepare to teach something new, I’ll record a 5-7 minute explanation of the new topic using a couple of the best example I can come up with. When I introduce the topic in class, whether by lecture or some other fun method (lectures should be fun. What is stand up comedy if not a really funny lecture?), I know when I release my students into the wild to work on our activity, those who don’t understand know the routine.

If a student doesn’t get what we just went over, they know they can ask a friend and/or go watch the video I made either on their BYOD or on the class computers. If they still don’t understand after doing those two things, then they can ask me. This has done away with most of the learned helplessness in my classroom and this frees me up to work on more advanced stuff and give every kid some one-on-one time. I refuse to hold back the many for the very few that don’t, or, more likely, choose not to understand.

The videos stay up all year because if a student was absent, or, more likely, needs a refresher, they can watch the video again, over and over. Schoology tells me views on all of my videos almost doubled before my midterm. My Thesis video always get hits the day I assign an essay. And, maybe oddly, most of my students, about 70%, report having watched at least one of my videos at home for reinforcement.

Recording key concepts I want students to use all year is just a little thing I do to help them out, it doesn’t drive my teaching. I don’t plan my whole curriculum around making students watch lectures at home. You shouldn’t center your lessons around any one type of tech or teaching method. .

So what is flipping? A better word might be blending. Using short videos of a core concept for absent students to use to catch up, as an option for kids who struggle to take control of their own learning, and mostly as a refresher for students to watch when they need it. The Flipped Classroom™ is a lie, but flipping blending your classroom is a great idea and should be one of the many weapons a teacher has in their arsenal in an attempt to reach every kid. Don’t buy into the hype of The Flipped Classroom™ or any other teaching method that seems to good to be true. Learn to do your own bit of saving and at least you’ll know you’re heading for shore.

Something for you, intrepid explorer:

My new jam is having students make their own flipped videos! I tell them to make a short screencast with examples that teaches someone about the core concept they just learned. I tell them whoever makes the best flipped video will be added to my video library and be used to teach next year’s class. Try it! They’re flipping and they don’t even know it! They flippin’ love it!

cross-posted on Teched Up Teacher