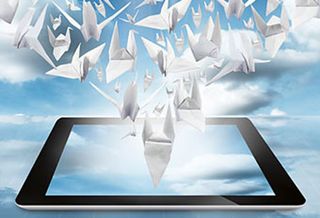 I love checking out new tech. I've used tablets before there were iPads, iTouches, Nanos, and Macs, PCs, Chromebooks, and more. One thing I've discovered despite those who try to make a case otherwise, tablets are better for consuming than producing. Laptops with real, not touchscreen, keyboards are better for producing, but while you can certainly read on them, it's not as pleasant an experience.

Now I'm checking out a Windows 8 Surface Pro 3. The best of both worlds. The consumption benefits of a tablet, with the full power of a laptop.

I may even like better than the other devices.

It has a sleek and beautiful design (Though it isn't that sturdy on it's feet. The kick stand collapses unexpectedly if you move around while typing which apparently I do as it's collapsed three times during the writing of this post). It’s fast. It's light. It has a long battery life (around 7 hours) and comes with a stylus.

For about $7 bucks a month you can get Office 365 too. But no need to pay that when you can use Google docs for free.

While rumor had it that Google Apps for Ed didn't run on earlier Surfaces, that isn't the case with the Pro 3. Google Apps work fine.

The ability to use and install my remote usb wireless, is a big deal for someone like me who travels between locations and is not possible with devices like Chromebooks.

It's a great professional device but at a list price of about $900, is it worth the cost when you can get similar functionality for so much less?

If you're an innovative educator, or are in the position for purchasing for a public school, probably not. Most would forgo beauty, design and remote wireless to get two or three times as many Chromebooks.

Additionally, Chromebooks eliminate imaging issues, that will still exist with a Surface Pro 3 and unlike Chromebooks, they are susceptible to viruses. My friend got a bad one within days of having her device.

But what about the stylus? We need it to write, right? It's great for things like notebook writing on platforms like OneNote or for writing mathematical equations?

Straight talker, Steve Job's told us in 2010 that if you see a stylus they've blown it. Yes. In the early days before touch screens we saw them everywhere. Today a stylus is, or should be, a thing of the past. It's just a part of our hand.

Same with notebooks. They are designed for paper. We don’t need to make them digital. On computers we have documents and files. Google saw that a few years back. They got rid of Google Notebooks and turned all the notebook data into Google docs. This is the modern way to compose and collaborate on work.

Are some companies using OneNote? I don’t know. Maybe, but it’s not the way most people do business and it just seems like trying put paper on screen which is unnecessary.

Also, writing is slower and less efficient than typing. The ohhh and ahhhs of converting writing to text is so last century. If we want to get to the thinking faster we type. If we want students to do that, we let them type early on.

But what about math?

Don’t we need to write equations? Actually no. Writing equations is the way we did math in school before there was technology. In today’s world, real-world if we want to do mathematical equations, we calculate. We use a calculator, spreadsheet, or other math programs or apps on our device. What’s more, these programs can help us visualize, analysis, and make sense of the equations behind results like graphs and charts...instantly!

However, if you really want to write out equations, you can use your finger to do so.

And, since our screens and fingers let us do what paper and pencil did in the past, let’s save our schools a bundle by just ditching the paper, printers, and ink. Students can read on screens. They can write on screens. They can and should do computation on screens. The jobs we are preparing them for will require it and evaluate their ability to do so.

Still, don't we need to know how to write a signature? Sure. So spend some time creating a beautiful, unique signature in the color blue. Make sure you know how to make it with your finger as well as a pen and stylus. Practice it like a movie star if you want. All that is loads of fun, but we know today, that you can scribble any old thing and it will be accepted in most places. In the meantime, more places are moving toward swiping identification cards (as some schools already do) or use a thumbprint scan. Both of which are more accurate than a signature.

How about art? What if we want to move beyond finger painting? If you want to use a device in an art class, you need more than a finger or a basic stylus. It's time for a stylus pack which an art teacher or student can purchase themselves for less than $20 each.

The Verdict?
If money is no object and you travel to various locations and need internet access, the Surface Pro is the right device. However, if you're in a cash-strapped school and don't have the man-power to deal with imaging and viruses, stick with a Chromebook. Even if you love the stylus, students won’t and if they’re anything like me, I’ve already lost mine. Most of them are likely to do the same.