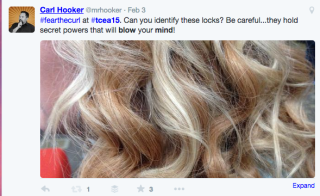 Having just returned from my annual trek 6 miles down the road to the TCEA conference, I noticed something about the participants of that event and the one held the previous week in the same location (TASA Mid-Winter). The TASA event had one MAJOR difference….suits.

And I mean a LOT of suits.

It’s an event focused on school leaders and things school leaders like (apparently wearing suits is one of those things). While the attendees at that event seem to be fairly one-dimensional, an event like TCEA brings all kids of people from all different walks of life. Teachers, librarians, administrators, tech people, all co-mingling around the concept of technology integration in schools. These people are far from one-dimensional and they rarely wear suits. That said, as we are a society that likes to categorize people, I found myself starting to do the same this past week.

Let me start out by saying that I have been EVERY one of the people on this list. I know that’s kind of like me saying “with all due respect” right before I insult you, but it’s true. That said, I present to you the 8 types of people that attend ed tech conferences:

I find the phrase “mind blowing” overused a bit in our field. I think there are a lot of great ideas out there and if someone is inspired by one, I think that’s a huge win. That said, can someone’s mind truly be blown at every session they attend. In fact, just trolling the #TCEA15 and searching for the term “Mind Blown” brings up a couple of dozen tweets on the topic. Quotes like “Google Slides are blowing my mind right now” or “Come to booth 807 to have your mind blown” seem to be common. I don’t want to diminish the excitement of attendees and I’d be honored to in fact blow their minds, but really? I mean look at this crazy tweet –

As I sit quietly in my sit and get session taking down notes, I’m distracted by the heavy internet shopping of the lady to my left. Without being too obvious, I glance over to take a look at the cheetah-patterned lamp shade she’s debating on buying. What does this have to do with Ed Tech? Well…at least she’s using her device for something right? We’ve all been in sessions that are just not that compelling and I’ll admit to my mind wandering toward a twitter stream to see if there is a better session taking place. But I usually don’t find myself searching Pinterest to find new ways to cover my ottoman or a creative way to make valentine’s day cards that will make all the other kindergarten parents jealous. Now….that said….if a particular sporting event or zombie show was on…it might be a different story.

It’s 8:57am on the first day of the conference and this person is already overwhelmed with the amount of knowledge being thrown at them. Add to that the fact that it’s been 13 minutes since their last double-expresso upside-down caramel latte and it’s a wonder they can function at all. I find myself becoming this person somewhere between 3:00 and 3:15 generally, so I understand the feeling. Much like my #student4aday Challenge, there is just so much you can cram into your brain attending back-to-back sessions and hope to retain some of it. As for caffeine, well, think of it as oxygen at events like this.

Forget internet shopping or being overwhelmed, this person just can’t stand to be in a session from more than about 9 minutes. Call it FOMO (Fear of Missing Out) or just someone who likes to optimize their seat time, but I see people bouncing in and out of sessions pretty much regularly (Shameful admission – I did this twice this past week). I can’t really blame people for doing this though. After looking over the session titles, it’s hard to really glean how good a session or presenter will be when it’s called “Top Google Tools” or “The iPad Classroom”. It would be great if someone invented some sort of rating system for presenters or content….hmmmmm.

I’m trying to listen and learn from this presenter but I can’t seem to get away from my email. The world isn’t going to stop if you don’t read those emails for the next hour, but your learning will. With the multitude of devices and “notifistractions” we encounter, it’s hard to focus on learning when you are putting out little fires each day. Do yourself a favor and try leaving all your devices behind one day to see what happens. You might be amazed that the sun still comes up the next day.

Ok. I’ll admit it. This was (and sometimes still is) me. For some, it’s the offering of free food and drinks. For others, it’s an opportunity to let loose away from the office. Either way, the larger the event the more corporate-sponsored after-hour gatherings take place. Being a major extrovert and social butterfly myself, I can’t blame these people for wanting to let loose or connect with others. Learning can happen in many different forms and arenas. Some of the connections I’ve made at social events have really helped me as an educator. That said, it’s hard to get up and learn at an 8:00am session when you just got in a couple of hours earlier. My (unasked for) advice? Choose one night to have fun with colleagues and friends, but don’t over do it. Afterall…you never know what will get posted on social media…(see image to the right)

Again, I can’t point fingers without pointing them at myself on this one. There’s a fine line between “over-sharing” and sharing though. I draw it somewhere in between – “Just had some bad indigestion from that food trailer burger across the street #burp” and “I just had my mind blown while typing this tweet.” (see #1)

In my history of Ed Tech conferences I’ve been on both sides of this (although stalking is a bit of a strong term). I remember vividly sitting in the lobby of BLC ’09 with my wife and then one child as I saw the likes of David Jakes, Alan November, and Howie Diblasi gathering. My wife could tell I was excited but I didn’t know what to do. My go to move when spotting an actual celebrity is pointing at them and shouting their first and last name (Matt Damon!!) but as I that might come across the wrong way, I decided instead to send my toddler in as a method of introduction. I still find myself star-struck from time to time, but now I’m starting to receive that same kind of treatment (which is very humbling). Tom Whitby wrote a great post about this a couple of years ago and I find a lot of his message really hits home. You never know who you might influence or who might influence you in this world, but in the end, remember we are all just regular people.

Coming to a exibit hall near you?

Everyone loves a free T-shirt, especially me. But is it really necessary to have every single pen and piece of candy offered in the vendor hall? One year when I was still in the classroom I once spent two days gathering as much free stuff as I could to take back to my kids. Last year we even ran a contest during TCEA where we gave a major prize to the attendee that gathering the most swag. The winner picked up more than 600 different items! At some point there will be a intervention type show on TLC for these folks, but until then I’ll happily listen to your 15-minute sales pitch in order to win that USB Aroma2Go oil diffuser!

As stated at the outset of this post, I can honestly say I have been each of these attendees to Ed Tech Conferences in the past. I reflect on them more for my own amusement and they aren’t intended to offend, but rather provoke thought. Are there some that I left off the list? If so, please comment below.

After reading these, I’m sure you might feel a little bit overwhelmed, but I’m really just hoping you’ll leave this post feeling like your mind was blown.