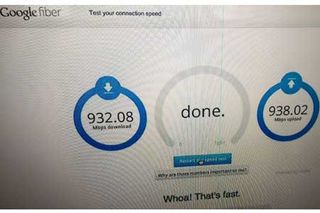 Most Tech & Learning readers are familiar with the Consortium for School Networking (CoSN), the preeminent player in advocating for technology in education. CoSN is not only active at the national level, but also at the state level. In 2005, Texas formed the first CoSN state chapter.

The first keynote of the conference was by Mark Strama, former Texas House of Representatives member, now head of Google Fiber Austin. Strama brought a hopeful message to technology leaders, whose students and teachers are hungry for more, often very expensive, bandwidth.

Strama indicated that as Google has entered broadband markets, existing broadband providers have had to react, increasing speeds and lowering costs, benefiting all consumers in these markets. While many in attendance wanted to know when they would see Google Fiber in their cities, Strama indicated that the planning, design, and construction of these massive fiber project is not a fast process. He said in Austin, Texas alone, over 2,700 miles of fiber is planned to be installed, none of which happens overnight.

Strama also said that Google is giving many area high schools free gigabit connections as part of the project. While schools are eager for fast broadband, many technology directors felt this was not a fully thought-out initiative, as connections to every high school in their districts would require additional construction, firewalls, filters, switches, and much more complex network configurations and management overhead at a time when they are already struggling to support all their district’s needs. Some leaders, appreciative of the gesture, felt a much better offer would be a single combined high-speed connection to one of their data centers.

Several staff members of the Texas Association of School Boards (TASB) HR Services gave another great keynote called “Salary Reboot: Rethinking Pay for K-12 Technology Jobs.” TASB provides services to all districts across Texas and assists many with conducting salary studies. Increasingly TASB is working very closely with technology leaders to improve technology pay systems. The market for technology professionals is highly competitive, and schools are not just competing with each other, but also with private businesses.

Interestingly, TASB noted that CTO salaries in K-12 are very far behind the private sector, with private sector CTO’s often making over 70% more. Given CoSN’s recent work on CTO gender gaps, including salary, TASB’s data for Texas was encouraging, with women and men having very similar pay in all but the largest districts. In fact, the most interesting piece of data they shared was the median CTO salaries for men and women in the state; Texas men’s CTO median salary was at $91,951, while women’s was at $95,883. But their data showed there are still many more men than women in the technology ranks and there is room for improvement and bridging the technology gender gap.

The 2015 CoSN Texas CTO Clinic conference was an inspiring event to mark the tenth anniversary of CoSN’s largest state chapter. But Texas is no longer alone, as more states are starting their own much needed chapters. In ten short years there are now more than 20 state CoSN chapters, helping to provide the necessary technology leadership that is often missing in other educational technology organizations.