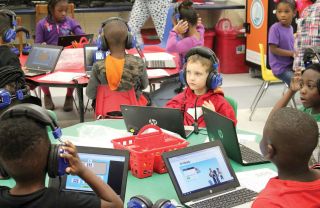 At the Tech & Learning Leadership Summit in October 2017, several districts that have been involved in 1:1 initiatives for many years came together to discuss their experiences. Here’s how they responded to ten questions about their challenges and successes.

1. WHAT’S THE FIRST STEP IN PLANNING A SUCCESSFUL 1:1 DEPLOYMENT?

It may seem obvious, but it’s impossible to overstate: before launching a 1:1 program, it’s essential to have a vision—to understand why you’re choosing to equip each student with a device and what goals you’re hoping to reach. This process of creating a vision needs to involve a wide range of stakeholders.

“It should not be a technology department initiative,” says Paul Sanfrancesco, director of technology for Pennsylvania’s Owen J. Roberts School District. “Nor should it just come from the superintendent. You need buy-in, with curriculum, and technology teams working together.”

It’s particularly important to involve the building principal in managing the program, Sanfrancesco adds, and to get teachers on board from the start. Empowering and supporting teachers also mean having plans for ongoing professional learning experiences that focus on teaching practices rather than the technology itself.

2. WHAT ELSE IS ESSENTIAL BEFORE LAUNCHING?

Ensuring adequate infrastructure is another key to the success of a 1:1 program. “The technology absolutely has to work—just like electricity or any other utility you rely on every day,” says Joel Handler, director of education for the Hillsborough (NJ) Board of Education. “It has to be so convenient that it’s an expectation, a part of the culture.”

Sanfrancesco agrees: “You have to have adequate bandwidth and access points in place from the start, as well as plans for refreshing the technology.” In order to avoid dead zones, his district enlisted the help of the student council to identify places where coverage was lacking.

“It’s important to have facilities at the table from the start, as well,” adds Jim Pulliam, CIO of Orange County (FL) Schools, “to help with such things as adequate power for charging the devices.” Although districts that have gone the Chromebook route say they have less of a need for charging stations since Chromebooks hold a charge for a very long time, most agree that involving facilities—as well as IT personnel—in the planning process is important.

3. WHAT DEVICES ARE YOU USING, AND IN WHICH GRADES?

The 1:1 districts involved in the summit discussion have made a wide range of device choices, including Windows laptops (for junior-high students in Auburn, Alabama and for high-school students in Columbus, Indiana) and iPads in grades 1–12 in New Braunfels, Texas. However, the overall trend is towards the adoption of Chromebooks in the middle and upper grades, with many districts using iPads in the primary grades.

4. DO STUDENTS KEEP THE DEVICES OVER THE SUMMER?

Many districts collect devices at the end of the school year for servicing over the summer. According to Ben Markley, CTO for California’s Valley Center-Pauma USD, “We collect them and use the summer to clean, update, and fix any damage we didn’t know about [previously]. We have talked about letting them go home during the summer, but we’ve been concerned about student transiency and devices not being returned in the fall.”

On the other hand, says Sanfrancesco, “Learning doesn’t stop over the summer. We used to collect the devices at the end of the school year, but kids were upset about not having access all summer. Now that we allow them, we have not found it to take a major toll on the life of the devices.”

Pulliam adds, “We used to have students turn in the devices and get new devices the following year, but parents indicated in surveys that they wanted their kids to keep the same device from year to year, since that way they were more invested in taking care of it.”

Although the same device now follows each Orange County student from one grade to the next, they’re still collected over the summer for retrofitting. According to Pulliam, “During the summer every device is touched, meaning we wipe and update the software image, check for any needed warranty/repair work, balance our asset management system, and stage devices for incoming students. To handle this workload without increasing the need for FTE, we have started hiring 10-month employees as well as interns from our Orange Technical College who are in the Career and Technical Education (CTE) Program. In this way, we enhance employee retention by offering 12-month employment to 10-month employees and provide a career path for those in the CTE program.”

5. WHERE DOES BYOD FIT INTO YOUR PROGRAM?

Answers to this question differed quite a bit from district to district. In Hartselle City Schools in Alabama, where there isn’t a complete 1:1 ratio at this point, district technology coordinator Tim Southerland explains, “We are a blended system with BYOD and 1:1. We have one cart of iPads per classroom in grades K–2 and one cart of Chromebooks per classroom in grades 3–12. We allow BYOD to supplement that.”

According to Pulliam, Orange County is mostly using BYOD to help while they transition to 1:1. “We only allow BYOD to be implemented with schools that are waiting for their implementation of 1:1 devices. Eventually every student in the district will be assigned a device and the need for BYOD will dissipate.”

Markley agrees that the ideal is to move away from BYOD. “We have concerns of equity and manageability with BYOD,” he explains.

Other districts, including Bartholomew Consolidated School Corporation in Indiana and Mississippi’s Gulfport School District, prefer to offer BYOD as an option to accompany 1:1. “Our district policy allows BYOD and provides guidance for it,” says Tracy Daniel-Hardy, Gulfport’s director of technology. “However, whether it is permitted in an individual school or classroom is up to the administrators and teachers.”

Many districts raised money for their initial implementation through grants, partnerships, or local bond or capital project funding. To sustain 1:1, however, they typically find it necessary to have money set aside in the standard budget each year. As Rich Newman, superintendent of Alpine (CA) Union School District says, “Flatlining of the budget—with a standard amount you can predict from year to year—is crucial.”

A number of districts do this through leasing. In Hillsborough, Handler says, “We bought everything on a four-year lease and refresh all the devices at the end of the lease period. In this way, we avoid spikes in the budget.” He adds that the district is looking for a way to do something similar with additional equipment, such as projectors and networking equipment, since they’re not currently available to lease.

Other districts do not lease but instead spread out their costs by staggering their purchasing. “We refresh two grade levels each year,” says Daniel Fishbein, superintendent for Ridgewood (NJ) Public Schools. The models that are in good shape after two years are handed down to the younger grades.

7. WHAT HAVE BEEN SOME SURPRISES OR LESSONS LEARNED ALONG THE WAY?

“Damage rates for the student devices have been a lot higher than we expected—as much as 25% or 30% per year,” says Handler. “We didn’t supply cases with the original rollout and believe that has been a leading cause for these high damage rates.” Like Hillsborough, several other districts cited repair issues—screen replacements, in particular—as an issue they needed to address.

Professional development to deal with classroom management issues and opportunities is another. “We’ve learned that it’s very important to teach the teachers not only how to use the software and the devices, but also how to manage the devices and manage the students when they’re using the devices,” says Daniel-Hardy.

“The community/parent piece” is both important and challenging, according to Jon Castelhano, executive director of technology for Gilbert (AZ) Public Schools. “It’s a work in progress that will continue to be addressed so that we’re communicating the importance of the devices in our classrooms.”

Finally, says Pulliam, “When kids take things home, be prepared for security issues to increase. We have an AUP for students but we need to differentiate the disciplinary phases of the violations. For example, should a student who hacks into a student information system be disciplined the same as a student who brings a gun to school? The implementation of 1:1 means that IT and teaching and learning need to collaborate to handle student conduct. Next year, the CIO, CAO, and deputy superintendent will be implementing a new disciplinary program that pertains to technology.”

8. WHAT ADVICE DO YOU HAVE FOR CARING FOR THE DEVICES?

As Handler points out, issuing protective cases can help prevent damage but, beyond that, it’s important to have plenty of extra devices available—as loaners or, in some cases, replacements.

Many districts offer outside insurance to cover loss or major damage to individual devices. Most others have some sort of self-insurance option and/or a small ($20–$30) annual device fee to help cover overall maintenance costs.

Being able to repair devices in-house not only saves money but also provides hands-on opportunities for students learning about technology. “Students work with our repair group to fix, provision, and provide general maintenance for the devices,” says Castelhano.

9. ARE THERE OTHER THINGS THAT HAVE BEEN HELPFUL WHEN IT COMES TO DEVICE MANAGEMENT?

“We’ve learned a lot over the years,” says Markley, whose district launched its 1:1 program in 2012. “In particular, we’ve made a lot of changes and improvements to the way we manage the devices.” Markley shared some examples, including:

■ Originally, we used teacher spreadsheets for device assignments, but now we’re using our library system to manage all the check-ins and check-outs, fines, and student agreements.
■ We’ve improved and streamlined the repair process through a local vendor, who picks up and drops off within 48 hours.
■ We’ve streamlined our parent device agreement and insurance options through websites, PayPal, and custom databases.
■ We have a library of approved/not approved apps, with appropriate grade level and academic focus, as well as a process for teachers to request that new apps or extensions be added.
■ Allowing devices to go home requires a lot of planning and preparation. Our take-home process and expectations have improved, and they’ve been better communicated with staff, students, and guardians.

Pulliam adds the following advice about asset management:
■ Principals are responsible for the 1:1 devices during the school year, and once the school year has ended IT takes ownership of the assets until the start of the next school year.
■ Typically, repair of devices through an outside vendor takes two to three weeks. We’re implementing a program that will enable the school district to take ownership of the warranty and repair work.
■ Information security throughout the district will change drastically with the advent of devices in the hands of every student. We’ll start next year with a campaign to educate students, parents, and teachers.
■ Finally, we’ve learned that governance among stakeholders is critical to the success of the program, and minor changes to the process will be implemented next year.

10. WHAT’S WORKING PARTICULARLY WELL FOR YOU?

Markley speaks for many of the experienced 1:1 districts when he says: “The culture and expectation that all classes will use technology to enhance and improve instruction is embraced by staff, students, and the community. The desire to utilize the devices to take education to the next level is obvious and contagious. While we don’t have everything working as expected all of the time, it is clear the devices have contributed to improved student learning that wouldn’t be possible otherwise.”