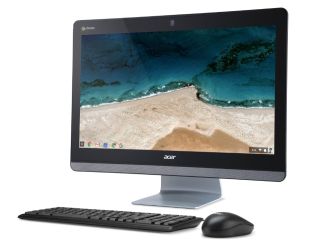 Looking for The Chrome ecosystem is not just for Chromebooks anymore with tablets, desktops and all-in-one systems available for the classroom. The Acer Chromebase 24 ($400) stands head and shoulders above the crowd when it comes to delivering value at school.

At 15.8 by 22.9 by 1.5 inches, the Acer Chromebase 24 has a two-tone black and silver design and rounded corners that make it look a lot like an Apple iMac. It takes up 24- by-12 inches of desk space and is 18.4 inches tall. It came with a wired keyboard and mouse set that fit well under the Chromebase 24’s screen.

It weighs in at a modest 20-pounds and should fit nicely on everything from a computer lab or library table to a physics lab bench or the school’s front office. The stand looks great and has a place for snaking wires, but the system can also be hung on a wall with a standard VESA mounting bracket.

The system is powered by a small external power adapter like those used on notebooks, although it requires a three-prong grounded outlet. Inside, the Chromebase 24 has a dual-core Celeron processor that runs at 1.7GHz but doesn’t vary its speed based on the task at hand. It comes with 4GB of RAM and a scant 16GB of solid-state storage space that falls short of the 128- or 256GB that most Chromebox desktop systems like the CTL CBX1C or Asus Chromebox 3 include. It should be fine for most school uses and there are ways to augment its storage potential.

On the display’s left side is a cut out for the SD card reader that makes adding up to a 256GB card for extra storage a snap. There’s also a headphone jack and a USB 3.1 port. In the back, the Acer Chromebase 24 has two USB 3.1 one USB 2.0 ports and a gigabit wired LAN connection. The HDMI port works well for sending video to a projector, but it can’t be used as an input for viewing an external video source on the system’s display.

The Acer Chromebase 24 does just as well with wireless data as with cables with built-in 802.11ac Wi-Fi and Bluetooth. It quickly connected to my network and later I used a wireless speaker, keyboard and mouse.

With a pair of speakers under the screen and four microphones above, the system has surprisingly strong audio. This makes it appropriate for video conferencing, creating podcasts or interactive online curriculum. Its screen measures a comfortable 23.8-inches (diagonally), shows 1920 by 1080 resolution and was more than bright enough to use in a sunlight room. It, however, does without touch sensitivity.

The Acer Chromebase 24’s display is adjustable to suit a variety of kids and adults, with the screen tilting from 5-degrees forward and 30-degrees back; it can’t be moved up or down, though. By the same token, the system’s 1280-by-720 resolution Web cam has a lever behind it to aim the camera up or down 30-degrees.

All this adds up to a system that’s just as good for researching a social studies paper or viewing YouTube videos as for taking assessments or videoconferencing with a parent. It scored a 15,854 on the Octane benchmark that includes key tasks like math processes, encryption, memory and storage operations. That puts it 15 percent ahead of the Acer Chromebox 3’s 13,770, but 28 percent behind the HP X2 Chromebook’s 20,366.

The Acer Chromebase 24 is a secure system with a Trusted Platform Module to encrypt data. The system easily handled a month of daily use that included everything from recording and viewing videos and listening to podcasts, writing and editing Google Docs as well as drawing with Sketchpad and using the Desmos graphic calculator.

Still, the Chromebase isn’t a power hog. When it was being used, it consumed just 15.3 watts, including its display; when it was idle, that drops to 1.3 watts. If the school pays the national average of 13 cents per kilowatt-hour and uses the system for 8 hours per day, every school day, it will cost less than $4 a year to operate.

Of course, there’s a lot more to Acer’s Chromebase 24 than numbers and specs. It comes with a one-year warranty and is not only powerful and economical enough for most schools but its design and finish are surprisingly high-end for a computer that costs $400. The Chromebase 24 is one of the best buys in school computers you can get today.