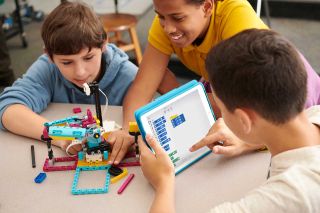 Since its unveiling in April 2019, LEGO Education's SPIKE Prime has been the most anticipated product from LEGO Education. SPIKE Prime delivers an intuitive, naturally adaptive and highly inclusive learning experience that helps students build confidence and develop the essential STEAM and 21st-century skills they need to succeed in a rapidly changing workforce. In other words, a product perfect for my classroom.

Over the two weeks, my student Wyatt and I were lucky enough to play with SPIKE Prime, which brings together LEGO bricks, a programmable, multi-port Hub, and sensors and motors, all powered by the engaging SPIKE App, which is based on the Scratch coding language. The kit also includes 32 lesson plans.

As with all LEGO products, SPIKE is colorful and well-made. SPIKE feels sturdy when fully constructed. The lesson plans capture valuable STEM standards and design thinking concepts. Lesson plans are easily to follow and adapt to school’s lesson plan requirements.

Wyatt found the instructions easy to follow and really enjoyed the way the product came packaged. Every brick had its place. He found it easy to take out and put away SPIKE, as it took us several recesses to put the SPIKE together.

Building SPIKE was a breeze for a seasoned veteran like Wyatt, but Wyatt also feels even a LEGO beginner would have an easy time getting SPIKE operational.

Creative Use of Technology

Suitability for Use in a School Environment

SPIKE is designed for ages 10+, grades 6 to 8. I found the lessons to be academically appropriate for the grade levels SPIKE was intended for, but I also could see myself thinking ways to adapt SPIKE for different levels of academic need.

I enjoyed watching Wyatt start out attempting to follow instructions for building a car-like robot, but quickly switch to building his own custom robot that could only be described as a can crusher.

Wyatt – 10/10! We both loved SPIKE Prime. It is easily the best LEGO education product available.

SPIKE Prime is fun, engaging for students, and as a teacher, I love that I can use SPIKE for a variety of lessons, even beyond its 32 premade lesson plans.

Chris Aviles is a middle school teacher at Knollwood Middle School in Fair Haven, New Jersey who runs a program called Fair Haven Innovates, which is the district's 21st-century life, innovation, and technology program. Wyatt Zaleski is one of his 6th grade students, and a Lego enthusiast. Recently, the two were asked to review LEGO’s new SPIKE Prime kit, offering both a student perspective and a teacher perspective.