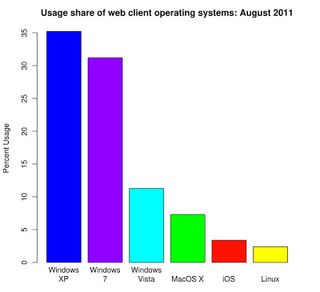 Might I suggest that adapting to culture for the purpose of ideal pedagogy may require more financial resources - at least up front - than the alternative? In the long run, however, the cost of implementation will likely even out.

In a recent post criticizing the “general lack of critical thinking taking place in educational technology today,” fellow Tech & Learning blogger Ben Grey makes a well-reasoned argument in favor of adopting Linux for 1:1 student device implementations, rather than more expensive Macintosh or Windows alternatives. For $267, with the HP1103 running ubermix, Grey feels that he’s just as able to accomplish his instructional goals, while also utilizing a device that “is easier to manage, is easier to maintain, is cheaper to own, and allows students to entirely experiment and learn how to operate.”

So, thinking deeply, the netbook allows students to do 90% of what a MacBook can do. At 1/3 the price. That’s important. Because it demonstrates that 90% of the time students would have more machine than they need. So, if we can accomplish the goals stated above 90% of the time with a $267 device, why would we do otherwise…

So, that’s where I’m at. I know many people are doing great things with iPads and MacBooks and even full laptops running Windows, but I’d argue you could do all those great things at a fraction of the cost with a system that will be more effective and allow students more freedom in their learning.

From a financial standpoint, I think Mr. Grey has hit a home run. One-third the price!

Unfortunately, however, two critical elements are missing from his formula of success: Culture and pedagogy, which likely reside subconsciously in the sights of many who might oppose his views. Culture and pedagogy, I feel, contribute easily to a successful argument that the Linux-based netbook simply can’t “allow students to do 90% of what a MacBook can do.” While technologically it may seem as if Linux is on par to more traditional operating systems, society as a whole would more likely "think different."

Culture consists of the behaviors and beliefs characteristic of a particular social group. Furthermore, the cultural tendencies that exist locally but outside of a school environment will naturally permeate within the culture of the school. Culturally, I wonder, how many teachers are comfortable using Linux within the classroom. I doubt that many of them use it at home.

According to usage share numbers maintained by members of the Wikipedia community, precious few people worldwide (2.25%) have adopted Linux as an operating system used for accessing the web. Compiled using Gartner forecasts and other sources of market share, their numbers claim that more than seventy-five percent of Earth’s inhabitants use Windows. But this news isn’t new. No, new in the news these days is Macintosh, with Apple's rising market share, extensive array of attractive devices, and growing number of easy-to-use apps. With four million computers sold in Q3 alone, (and more than half that number of mobile devices sold), the conversations around Apple and their products abound in droves. Especially among teachers.

While I'm comfortable using Linux every now and then - and actually enjoy playing with new distros - the large majority of schools aren't yet ready for its adoption. Bluntly, I think teachers that love Linux are simply too few and too far between.

Admittedly, the "business world" is saturated with Windows devices (and has been for decades). Recognizing that current school-aged customers are simultaneously future business buyers, Microsoft partnered early with Intel and other players to penetrate school cultures with their products and philosophy. To date, there are numerous quality programs and academic endeavors sponsored by Microsoft, to the benefit of schools and their patrons worldwide. Consequently, Windows has become a de facto standard throughout many school communities.

In recent years, nevertheless, advertising, clever marketing and "Hi, I'm a Mac," have also made it culturally easier for teachers and students to adopt Macs for learning over Linux, in spite of initial purchasing costs. Students and their parents have seen iPods at home, played with iMacs in stores, and coveted newly emerging products in a cultural celebration of higher-priced "quality." As a result, Apple has come far in winning their way into the hearts of young and old alike - before they even step foot into our schools. Honestly, isn't being "cool with kids" really half the battle?

Because Apple and Microsoft have worked hard to shape public opinion about the educational use of their products, teachers consequently have a much easier time developing curriculum with the culturally-accepted, technological status quo - than they would with likely any less-expensive Linux-based alternative. Most people just don't know Linux; and because they don't know it, they're less apt to trust it.

So, Apple has learned this lesson well - that trust is the name of the game - and has taken upon itself the responsibility of teaching the public why and how they might use their products to learn. When was the last time your students (and their parents) saw such a well-designed, publicly displayed, advertisement for learning with Linux? Sadly, little such marketing exists. As a result of Apple's efforts at teaching the masses during the last decade, public opinion has seen a shift and grown to trust the educational viability of its products. Because of this shift, the adoption of Apple products in schools has become easier than ever.

Moreover, because teacher and student perceptions have been softened by larger society's acceptance, deployment of now-prevailing technologies has become more bearable in the minds of those within the school community. Impressions of purpose for technology in learning have shifted - from propellor-head add-on, to refreshing and often essential pedagogical enhancement. "How?" has replaced "Why?", and "When, if not now?" seems most important of all.

Because technology is now "cool" in the minds of student users, teachers can identify with their new-found ability to make headway in earning their way into the hearts and minds of students. Student trust throughout all of this is vital. Consequently, teacher technology training on products promoted by school patrons is now seen as less of a burden; while curriculum development with educational technology becomes effortlessly more enticing.

When devices are culturally accepted as a helpful and welcome addition to any classroom, the technology enabling the pedagogy can become beautifully transparent. Then, and only then, can the skillful teacher provide unique and effective learning experiences that could never take place without technology's use.