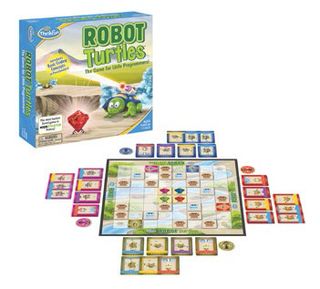 Since its launch in 2013, the Hour of Code has introduced more than 625,750,509 people ages four to 104, in more than 180 countries, to basic coding and computer science concepts. This year’s Hour of Code will take place from December 3 through December 9 and will offer an opportunity to engage students all over the world in computational thinking and coding.

The Hour of Code website (hourofcode.com) offers tutorials and activities from more than 400 partners in 45 different languages. There are also numerous apps, websites, and unplugged activities and lesson plans available. In addition to the vast array of options on the website, there are also a number of products on the market that make learning logic, problem solving, computational thinking, and coding more like a game.

If you want to engage students but don’t have computers or tablets, consider ThinkFun games, CoderBunnyz, and Turing Tumble.

ThinkFun has also released two brand-new games just in time for this year’s Hour of Code, Hacker and Potato Pirates. Hacker ($24.99, ages 10+) asks students to outsmart cybercriminals with its 40 challenges and 120 coding puzzles. With three levels of play, students take on the role of coder, hacker, or security engineer as they collect data, avoid viruses, and try not to set off alarms. Hacker teaches the concepts of concurrency and security mindset. Potato Pirates ($14.99, ages 7+) is a strategic card game which covers a variety of programming concepts like loops and conditionals as players attempt to collect 7 Potato King cards while mashing, roasting, and frying the other potato pirates. In addition to computer science concepts, Potato Pirates helps promote social interaction (www.thinkfun.com).

CoderBunnyz ($34.85, ages 4+) is a card game invented by an eight-year-old girl who wanted to make coding fun for everyone. This four-player board game teaches an array of computer programming concepts like control structures, sequencing, cuing, and debugging (among others) as players navigate their way around fences and over puddles to reach their special carrot. Offering four skill levels, CoderBunnyz offers a fun, low-stakes way to engage computational thinking skills (www.coderbunnyz.com).

Are you ready to take coding off the screen and bring it to life? Try Code Car, Love to Code, CodeGamer, or Robotics Smart Machines, all of which allow students to program objects and bring them to life.

Code Car ($45, ages 8+) from Let’s Start Coding introduces students to text-based coding by using C++ to manipulate features on a car-shaped microcomputer. Students will learn about variables, loops, functions, and more as they beep the horn, sound the siren, and flash the lights. Complete with video walkthroughs, guides, and explanations, Code Car has over 15 hours of challenges to engage students as they see their programs come to life. Once they have mastered the challenges, introduce them to the Let’s Start Coding Base Kit ($40, ages 13+) or Ultimate Kit ($94, ages 13+), which offer more complex opportunities. Let’s Start Coding also offers free online professional development so teachers can learn how to use the Base Kit (letsstartcoding.com).

For a mix of computer engineering and coding, try CodeGamer ($169.95, ages 10+) by Thames and Kosmos, which asks students to build their own video game controller then use it to program their way through various levels of a video game, solving problems and challenges along the way. Once they’ve completed the game, they’ll have the coding know-how to create their own projects (thamesandkosmos.com).

Robotics Smart Machines ($134.95, ages 8+) is another great way to combine engineering with computer programming, and it also adds a bit pf physics. After students build robotic models, they can bring them to life with the included block-based coding app. In addition to the building directions, cool facts and concepts—about physics, robotics, and computer programming—are found throughout the manual (thamesandkosmos.com).

Ready to do more than make lights and sounds? Add some motion and other animation to the coding experience with robots like Edison, Dash, Dot, and Cue from Wonder Workshop, or Bee-Bot, Blu-Bot, and Pro-Bot from Terrapin, meeperBOT, Phiro Robot, or KIBO.

Dash ($149.99) and Dot ($79.99) are a widely adopted duo of robots from Wonder Workshop designed for ages five and up that make learning programming, using a suite of five free apps, fun. The apps utilize block-based programming at a variety of skill levels to teach sequences, loops, conditionals, and more as students become more confident in their skills following step-by-step challenges. Add the Learn to Code Curriculum Pack ($129.99, ages 5–12) for detailed lessons fully aligned with Code.org’s CS Fundamentals course. For older students, try Cue ($199.00, ages 11+), with customizable personalities. Similar to Dash and Dot, Cue is controlled by an app that uses block-based coding, but it also introduces JavaScript. Add the Sketch Pack ($129.99, ages 6+) to Dash or Cue and challenge students to blend robots, math, and art (makewonder.com).

Edison ($49.00, ages 4+) is a flexible robot that can be programmed in four ways, including using barcodes, EdBlocks (block coding), EdScratch (a Scratch-like interface), and EdPy (Python), so as students gain skills and confidence they can transfer their knowledge to the next level. Add the EdCreate Edison Robot Creator’s Kit ($29.00, ages 5+) so students can combine engineering and coding to create the EdTank, EdDigger, EdRoboClaw, EdCrane, EdPrinter, and more. Edison fits in the palm of your hand, allows users to build their own creations using popular building bricks, and has a website that’s full of free resources for implementation—including lesson plans, student activity sheets, and more (meetedison.com).

meeperBOT 2.0 ($54.99, ages 5+) is a Bluetoothenabled robot that also allows children to create their own robot using popular building bricks. They can program the robot using BOTCode, a block-based language that also shows the text-based coding behind the blocks. The apps also include a comic-book-style story that immerses students in reading while programming (meeperbot.com/pages/meeperbots).

KIBO Robot Kit ($229 – $499, ages 4–7) allows students to explore programming in an unplugged environment, with the added excitement of sounds, lights, and movement. A multifunctional robot, KIBO is programmed using wooden function blocks (barcode programmed) to create simple and more complex sequences of actions. Curriculum guides and lessons are available for purchase on the website (kinderlabrobotics.com).

Kids First Coding & Robotics kit ($129.95, ages 4+) brings coding within reach for young children. Learn concepts like sequencing, loops, functions, and algorithms by programming a peanut butter and jelly sandwich, a mouse, a fire truck, a penguin, and more—all without a device. The robot reads the code cards using an optical scanner and then runs the program on the provided map cards. The kit includes 30 lessons aligned with CSTA standards, ISTE standards, and and a course from Code.org, and it follows a storybook-like format (thamesandkosmos.com).

Want the option of a plugged or unplugged coding experience with a robot? Try Bee-Bot ($89.95, ages 3+), Blue-Bot ($119.95, ages 3+), or Pro-Bot ($149.95, ages 3+)—a series of robots from Terrapin that introduce students ages three and up to basic logic and programming. Bee-Bot is controlled using the buttons on its back, and Blue-Bot adds Bluetooth capability and a drag-and-drop language as well as Logo and a TacTile Reader, which uses sequential tiles. Pro-Bot offers a greater variety of onboard buttons, allowing for more complex and user-driven programming, including sub procedures, and it features touch and sound sensors that can be incorporated into the sequence (terrapinlogo.com/robots.html).

You may also consider Phiro. There are two models of Phiro robots—Unplugged ($149, ages 4+) and Pro ($199 ages 9+). Both come with DC motors, lights, and sounds and are compatible with popular building bricks. Both allow for programming using built-in buttons, as well as swipe card coding without the use of a device. Pro adds the capability of Bluetooth mode so users can program via a device using Scratch 2.0, Snap!, or Phiro Code mobile app programming languages. There are several lessons available for free on the website (robotixedu.com).

BOOKS FOR THE HOUR OF CODE

Rosen Publishing offers a number of books that tie into the Hour of Code perfectly. From the interactive ebook series Spotlight on Kids Can Code to the graphic novel series Power Coders, students will find computer programming intertwined with activities and adventures. Spotlight on Kids Can Code is a set of 26 interactive ebooks intended for students in grades three through eight. They focus on a variety of computer science topics, including Boolean logic, digital security, geolocation, and more. Each of the interactive ebooks includes videos, maps and photos, questions and answers, timelines, vocabulary, concepts, and unplugged activities (rosendigital.com/resources/spotlight_kids-can-code.php). Computer-Free Coding by Kevin Wood is another Rosen series, appropriate for students in grades four through six, that features unplugged activities where students explore data, debugging, logic, and repeating. The Power Coders series by C. R. McKay and Joel Gennari is a set of graphic novels appropriate for grades four through six. The books follow a group of friends on their adventures involving computer science concepts like bugs, loops, sequences, and more. They’re packed with problem solving and cleverly disguised lessons, and students who enjoy graphics novels will engage immediately with these books (rosenpublishing.com).

The wide array of activities and products available means that students of all ages and skill levels can learn basic computer science principles during the Hour of Code and beyond. Join this international movement and help build your students’ 21st-century skill sets.