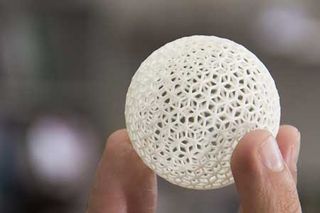 The purchase of one 3D printer has convinced Upper Grand District School Board Specialist High Skills Major (SHSM) and Technological Educational Lead for Upper Grand DSB Charles Benyair that the new technology is integral to the future of his students and the community at large. Two years after buying his first printer, the district now hosts a network of over 100 3D printers, with curriculums modified in every subject matter, programs that encourage students to build parts needed by the local community, and trained teachers who have become experts in the skill.

Following an initial investment, Benyair came across technology integration firm Advanced Education, at a local showcase venue, demoing Dremel’s new 3D printer. “I knew that these printers were the future of education,” he said. “We decided to also invest in Dremel’s 3D printers to help empower teachers and students to immerse themselves in the technology and further align their frame of thinking with the future.”

In addition to enhancing curriculum teachings with the technology, Benyair has taken the opportunity to involve his students in community service by solving local problems with 3D printing.

“We take some K-12 students out into the schoolyard and pose issues to them, which they in turn, design solutions for with the necessary software and printer.” Benyair said. For example, we had students design picnic table plugs that sealed up the umbrella holes in the winter when they weren’t being used.”

The district has also become involved with the “E-nabling the Future Prosthetic Hand Project,” a community of individuals from all over the world who are using their 3D printers to create free 3D printed hands and arms for those in need of an upper limb assistive device.

Since implementing 3D printers into their curriculums, the average percentage of students taking a technology class grew to 40%, which is 10% above the national average.

“3D printing is going to be a part of our everyday lives soon enough,” said Arthur Public School Vice Principal Jason Boyce. “While it is amazing to learn about a scientist using 3D printing to replace body parts or plans for 3D printing future colonies on the moon, the technology can solve practical problems everywhere, starting in the community.”