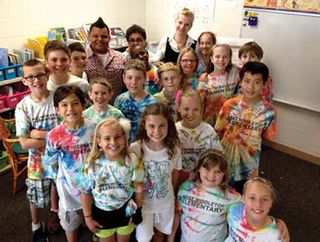 The whole world in your hands

Teachers who reach out to schools around the world to do global collaborative projects know it’s a perfect way to dive into the Common Core curriculum or just to connect students to the real world. If you’re looking for new ways to help students learn about themselves and about each other, here are some ideas to help you get started.

Pernille Ripp and her fifth-grade students enjoy reading with peers around the world.

“Global collaboration is necessary to show students that they are part of something bigger than them and that we need to care for all people,” says Pernille Ripp, a 5th-grade teacher at West Middleton Elementary in Verona, Wisconsin. “You can show them pictures of kids in other countries, but why not have them speak to each other?”

That’s why Ripp started Global Read Aloud (www.globalreadaloud.com), a four-year-old program that has connected more than 900 educators and introduced Edmodo (www.edmodo.com) to 30,000 students on six continents.

Ripp’s goal is to connect the world to a book she selects to read to her students during a set six-week period. During those weeks, participating teachers make as many global connections as possible, with each teacher choosing how much time she would like to dedicate. Some classes connect with just one class while others “meet” as many as possible.

“It’s really simple,” says Ripp. “Grab the book, find a class to connect with, read aloud, and discuss.” Her students have used Twitter, Skype, Edmodo, their wiki (globalreadaloud.wikispaces.com), email, regular mail, and Kidblog (kidblog.org) to chat with their counterparts, who have included participants from China, Australia, Hong Kong, Brazil, and South Africa.

Ripp’s school is already using the Common Core standards and, as a result, Global Read Aloud is aligned with the school’s writing standards. She’s planning to connect with four other 5th-grade classrooms this year. Once she starts reading, the students chat about the book on Edmodo, blog about their thoughts and predictions, and use Animoto (animoto.com) to make videos of the images they draw while listening. Sometimes they make Wordles (www.wordle.net/create) using vocabulary words.

“I choose books with social issues—last year’s was The One and Only Ivan by Katherine Applegate—and it’s great to see where the kids take it,” says Ripp. “They try to get kids to reply to them in more than one-word answers on Edmodo, which is great for starting conversations. We work on conversational skills in 5th grade, and this is another way to work on that.”

The Global Read Aloud is a way for students to create memories of global connections, understand that the world is much smaller than it seems, and see that children everywhere are just like them. “When my students listen to the same book as students around the world, the world shrinks. They wonder what the students in Canada or Australia think about the book, whether they got as excited or sad as they did, and whether the book is being loved as much as they love it. Now they don’t have to wonder—they simply ask questions in their Edmodo groups or via their Kidblog and discover what students around the world think will happen next or what the author’s message is.”

What They Use West Middleton Elementary

This month, on September 15th, is International Dot Day, when more than 850,000 participants all over the world connected to celebrate creativity and self-expression. Thanks to Shannon Miller, district teacher librarian and integration specialist for Van Meter (IA) Community School District, her students were a part of the fun.

“Dot Day is a favorite collaboration of mine, and it’s so easy to get involved,” says Miller. “We started a Google Doc, made it public, blogged and tweeted about it, and invited others to join.” Within weeks, schools from Japan, China, New Zealand, Australia, and Canada had signed on. They were asking things like, “Is there a 1st-grade class that wants to connect for 10 minutes at 11:30 a.m. EST on September 17th?”

But Dot Day was only one of the ways Miller’s students collaborated. Earlier this year, her district celebrated with 21 other schools for Poem in Your Pocket Day.

“Global collaboration takes planning, but it doesn’t have to be a 30-minute connection,” says Miller. “It can be as simple as using Padlet (padlet. com), which is an interactive wall you can write on.” In addition to Padlet, they use Google Docs and Edmodo for this type of work and have even written collaborative poems with other students. “It’s more about the relationship and less about the technology,” says Miller. “What kids take in from others is the most important part.”

When her students collaborated with a school in Australia, the time difference made it a little tricky but they still fostered relationships. “The Australian students had an early brunch while we ate popcorn for an after-school treat. Parents came in and it was a lot fun to get our communities involved.” Students shared projects, introduced themselves, and recorded messages for each other. Thanks to Edmodo and Kidblog, students continue their conversations long after the official projects end.

What They Use Van Meter Community School District

Seniors studying English literature at Clintondale High School (www.flippedhighschool.com) in Clinton Township, Michigan—a flipped high school— collaborated on a Holocaust project with an Israeli high school last year. The students in both countries read The Diary of Anne Frank and discussed the book using Google Groups. The Americans visited the Holocaust Memorial Center in Detroit and made a video. The Israeli students visited the Auschwitz concentration camp in Poland and sent a video and photographs. “We learned a lot about school in Israel,” says Principal Greg Green. “For instance, we didn’t know that they call their teachers by their first names.” The American students also learned Hebrew by translating their collaborators’ letters, and many of them partnered up online to continue discussing the readings. “Overall, we gained perspective on what the Israeli students thought and compared it with our perspective,” says Green. “The cultural pieces were fascinating.”

This was Clintondale’s first experience with a global connection, and Green was so thrilled with its success that he plans to do more global projects in the next year. “We personalized the curriculum in that class so that students can connect with as many entities as they can to be better prepared for college or the workforce,” says Green.

What They Use Clintondale High School

Yarmouth High School students check their blog for comments from students across the Middle Eastern.

In 2011, Amy Sanders, a social studies teacher at Yarmouth High School in Yarmouth, Maine, wanted to connect her juniors and seniors to the real story of the protest movements in her elective class on Middle Eastern studies. She turned to her district’s tech integrator, Alice Barr, for assistance. “Amy had been to Egypt and met some teachers there who wanted to collaborate, so that’s where we started,” says Barr.

The idea behind Project Arab Spring was for students to do research and share information on their countries, so Barr created an open Google Doc and invited students from Yemen, Tunisia, Libya, Egypt, Syria, and Bahrain to connect. Students could participate anonymously, which worked out well for the Egyptian and Tunisian students who had security concerns.

Students contributed to the Google Doc, then posted on a blog (arabspringcomments.blogspot.com) and asked for comments to see if the general public would weigh in. “It was a little bit tricky because of the protesting, but we did get a few responses,” says Barr. “We learned that our students wanted to know what was really going on and to have real people talk with them.”

Because the Middle East is so different from the U.S., the project was an eye opener for the American students to learn about religious and cultural differences. It was also a nice way to promote global citizenship and acceptance.

CCSS.ELA-Literacy.RH.11-12.1 Cite specific textual evidence to support analysis of primary and secondary sources, connecting insights gained from specific details to an understanding of the text as a whole.

CCSS.ELA-Literacy.RH.11-12.2 Determine the central ideas or information of a primary or secondary source; provide an accurate summary that makes clear the relationships among the key details and ideas.

CCSS.ELA-Literacy.RH.11-12.6 Evaluate authors’ differing points of view on the same historical event or issue by assessing the authors’ claims, reasoning, and evidence.

CCSS.ELA-Literacy.RH.11-12.8 Evaluate an author’s premises, claims, and evidence by corroborating or challenging them with other information.

CCSS.ELA-Literacy.RH.11-12.9 Integrate information from diverse sources, both primary and secondary, into a coherent understanding of an idea or event, noting discrepancies among sources.

What They Use Yarmouth High School

#5: Discovering a Love of Literature

Hartman’s students made videos about themselves for their collaborators.

Danielle Hartman describes herself as a highly experimental teacher, so when she and her colleagues at the Burlington County (NJ) Institute of Technology rewrote the curriculum to tie in with the Common Core standards, they added a lot of project-based work. For a unit on cultural awareness (www.bcitawareness.weebly.com) in her contemporary world literature course, she decided to let students collaborate. She was eager to see which country her sophomore students would choose, and they surprised her by selecting Italy.

Hartman turned to ePals—the social network she uses for all of her collaborative projects—and found an English teacher in Italy. To get started, the students introduced themselves via iMovies. Next, they read contemporary Italian literature and used Google Hangouts to discuss how culture affects perspective, writing, and point of view. They also used TodaysMeet (todaysmeet.com), a closed chat room, and Weebly (www.weebly.com), to blog together. “It went so well that we are going to Italy and they are visiting us,” says Hartman. “Their school has money in the budget, but we’ll be doing lots of fundraisers to pay for our plane tickets.”

Hartman says ePals is the perfect platform for getting started. “It’s safe and secure, and I can monitor their emails,” she says “I’ve used PenPal News, Skype, and other methods, but ePals has always worked the best. You may have to do a little legwork to find partners but the opportunities are there.”

CCSS.ELA-Literacy.RL.9-10.6 Analyze a particular point of view or cultural experience reflected in a work of literature from outside the United States, drawing on a wide reading of world literature.

CCSS.ELA-Literacy.SL.9-10.1 Initiate and participate effectively in a range of collaborative discussions (one-on-one, in groups, and teacher-led) with diverse partners on grades 9–10 topics, texts, and issues, building on others’ ideas and expressing their own clearly and persuasively.

What They Use Burlington County Institute of Technology