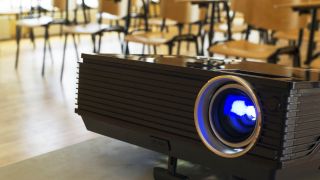 Naturally, an important component when considering a new projector is the picture quality. It seems like the bigger the better when it comes to resolution, opting for the highest numbers on the box would be an slam dunk to guarantee the best image and graphics to enhance learning in the classroom. But what do the numbers actually mean? Native to max — deciphering the specs offers the clearest picture for your purchase.

Whether you are considering an LCD, DLP or LCOS projector — the tech’s built in micro-display bears its own resolution. This chip or display panel is comprised of pixels. The total number of these pixels is referred to as the projector’s native resolution. A Native Resolution of 1280x720 means there are 1,280 pixels across and 720 pixels vertically. This restricts what images can be properly displayed. A projector can’t directly display images with a resolution higher than what it can physically depict, because that would require a larger number of pixels to accurately display the details.

Despite what the term suggests, Maximum Resolution is not a spec referring to the largest resolution possible from a projector. The term actually is tied into the input signal of the data needing to be displayed. A number of different formats and media sizes can be sent, so each projector has the capability to translate those signals and process it into an image or video to display. The maximum resolution is the highest level of incoming signal the projector can handle.

Scaling, What Goes Up…Also Goes Down.

When the input signal matches the native resolution, the picture or video can simply be processed as is. The process of translating or converting the variety of non-matching incoming signals is called scaling. Scaling can either go up or down. If the input signal is smaller than the Native Resolution or physical pixel size of your projector, the scaling needs to expand the picture to fit the full frame of the display. If the incoming data or video signal is larger than the native resolution, it needs to be compressed or scaled down so that it can smoothly be transmitted through the projector.

Although scaling can bring an image or video up or down to fit the size of a display, non-native signals will never be as true as those that match the natural sizing of the projector. The process is one of estimating and recreating what the pixels should display, had they been an exact match. Clarity and detail are not added, so when translated or scaled, image sharpness will be sacrificed.

While video fares far better than some signals, extra thought should be put into choosing computer data to share. Change the output signal on the computer or device for better compatibility. Matching the projector’s native resolution could make a noticeable difference and avoid a fuzzy appearance which could be particularly challenging for students when images include reading passages or details integral to the lesson.